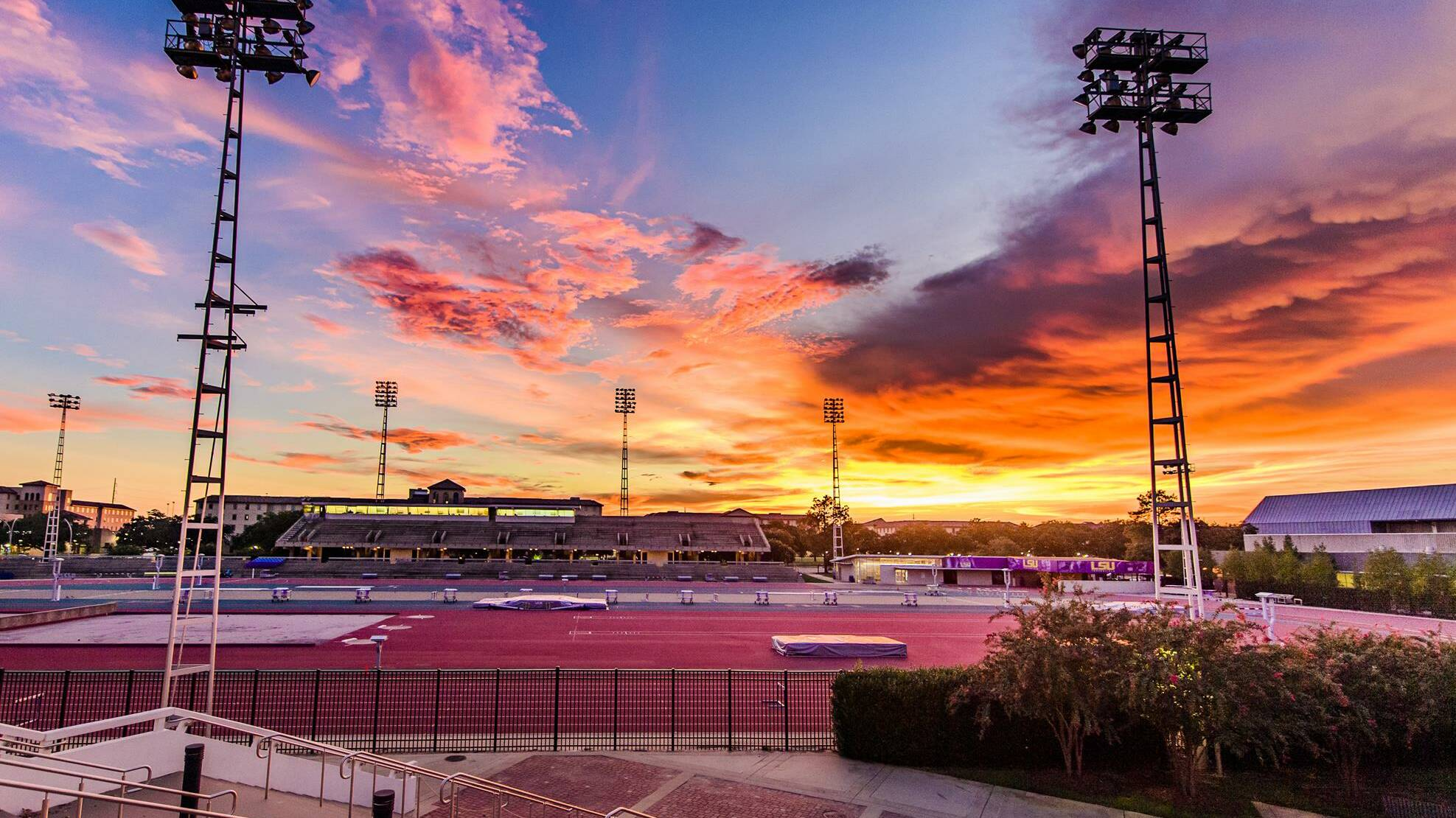 The heart of any track and field program lies in its facility. LSU is fortunate enough to own one of the finest track facilities in America and the world in the Bernie Moore Track Stadium.

The stadium was named in 1971 after legendary head coach Bernie Moore, who guided the LSU Track & Field program for 18 years (1930-47) and led the Tigers to their first NCAA Championship in 1933, as well as 12 SEC crowns during his tenure.

The Bernie Moore Track Stadium underwent an extensive $5 million renovation in 2010-11, which includes a complete resurfacing of the track, restructuring of the infield and redesign of the throws field to give the LSU teams one of the finest facilities in the country in which to compete.

The track has been resurfaced with Mondo FTX, which is the same surface used in the 2008 Olympic Games held in Beijing, China. In addition to the 400-meter oval, the infield also features a sprints and hurdles straightaway, each with nine lanes with 48 inches in width.

In addition, located at the South end of the stadium are two javelin runways and two hammer and discus cages worthy of hosting competition for the nation’s premier throwers.

In 1969, prior to its naming after Moore, the stadium was laid with a tartan surface making it one of a select few all-weather tracks in the United States and a perfect host site for many of the track world’s elite events. A sampling of these prestigious competitions include the NCAA Championships in 1973 and 1981, the 1982 TAC National Decathlon Championships, the 1982 Decathlon Dual Meet with West Germany, the 1984 SEC Championships and the 1984 TAC National Junior Olympics.

Further renovations were completed at the Bernie Moore Track Stadium in 1987, as $1.3 million was spent to lay the nine-lane, 400-meter oval track with Rekotran in time for the NCAA Outdoor Championships. In addition, the nine-lane infield straightaway — the first of its kind in the world — was installed. The facility’s improvements and new benefits were seen immediately as 12 NCAA meet records and three collegiate records were set at the national meet that year.

With the reputation as one of the finest track facilities in the country firmly intact, the Bernie Moore Track Stadium went on to serve as host for several more prestigious track and field events, including the 1993 National Senior Olympics and the 1993 USATF National Junior Olympics.

In order to keep up with the advancements of the sport, the Bernie Moore Track Stadium once again underwent massive renovations in 1999. That year, a brand new nine-lane 400-meter oval track was laid by Martin Surfacing, the makers of the 1984 Los Angeles Olympic track. In addition, the stadium’s signature nine-lane infield sprint straightaway was also resurfaced.

And with its latest round of renovations completed in early 2011, the Bernie Moore Track Stadium has continued in its tradition of excellence as a perfect site for competition. Most recently, LSU played host to the 2002 NCAA Outdoor Championships and 2004 NCAA Mideast Regional Championships, as well as the 2012 SEC Outdoor Championships.

The LSU Field House is widely recognized as one of the country’s best facilities for top-level indoor competition. Completed in 1975, the LSU Field House originally sported a 220-yard unbanked tartan oval. In December of 1987, the oval was slightly widened to its current 200-meter configuration.

At the SEC Indoor Championships in 1998 the track at the Field House was dedicated and renamed in honor of late LSU Athletic Director Carl Maddox, an avid fan of track and field and a major force in building the Field House.