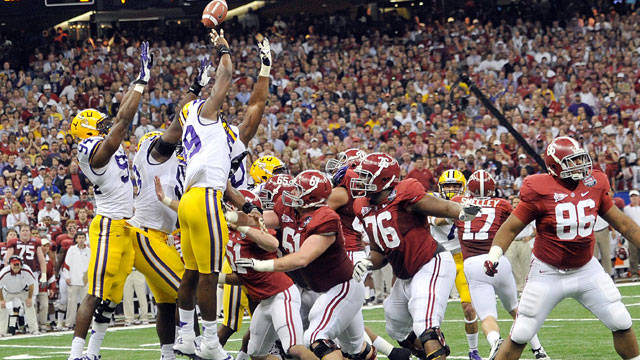 NEW ORLEANS — After enduring a brutal schedule unblemished, No. 1 LSU (13-1) suffered its first loss in a BCS bowl, as No. 2 Alabama claimed the 2011 BCS National Championship, 21-0, on Monday at the Mercedes-Benz Superdome.

Alabama (12-1) set a bowl record with five field goals and added a 33-yard touchdown run by Trent Richardson in the final minutes to stake a claim to its 14th national title.

LSU, which never found the spark to get its offense in gear, saw its 14-game winning streak snapped after defeating eight ranked opponents in the regular season and holding the No. 1 ranking since Sept. 24.

The Tigers had defeated No. 2 Alabama on Nov. 5, 9-6 in overtime, in Tuscaloosa before finishing the regular season with come-from-behind victories over No. 3 Arkansas and No. 12 Georgia to win its 11th SEC Championship.

Tonight, however, there was no room for error, as a stingy Tide defense coupled with untimely penalties and fumbled snaps left LSU short of its ultimate goal. LSU fell to 4-1 in BCS bowl games.

The Southeastern Conference won the BCS title for the sixth-straight season, while suffering its first loss at the same time in the all-SEC BCS Championship game.

Alabama quarterback AJ McCarron was the game’s Offensive MVP, completing 23-of-34 passes for 234 yards. The sophomore was nearly flawless, as he put Alabama in position to grind out a victory with five field goals in seven attempts. Richardson led the way with 96 yards rushing with the game’s only touchdown.

McCarron’s favorite targets were his tight ends, which he used them to exploit the Tigers linebackers for 11 of his 23 completions. Brad Smelley had a game-high seven catches for 39 yards, while wide receivers Darius Hanks and Kevin Norwood combined for 136 yards on nine catches.

LSU’s offense entered Alabama territory only once, late in the fourth quarter. Alabama linebacker Courtney Upshaw was the game’s Defensive MVP with seven tackles and a sack.

Quarterback Jordan Jefferson struggled to find any rhythm against the top-ranked Alabama defense, as the Tigers senior completed 11-of-17 passes for 53 yards with an interception. The Tigers managed 39 net rushing yards. Wide receiver Odell Beckham Jr. led LSU with 38 yards on five catches.

LSU took the first shot offensively, as Alabama won the coin toss and deferred its decision until the second half. LSU’s Morris Claiborne took the opening kickoff 26 yards to the 28 where Jefferson took the first snap.

After a 6-yard pass to wide receiver Rueben Randle came up two yards short of a first down, Jefferson fumbled the third-down snap and was forced to dive on the ball at the LSU 34. Brad Wing‘s 59 yard punt along the right sideline was fielded by Maze at the Alabama 7 where Tyrann Mathieu quickly corralled the speedy receiver at the 10.

Backed against their goal line, Alabama showed its hand early by pitting its tight ends on LSU linebackers and safeties, and looking to make short passes against a run-stopping front line. McCarron found Smelley for 15 yards on the first play and looked to him and 6-foot-6 Michael Williams for another first down at the Alabama 37. LSU was ready for Richardson’s first two runs of the game, stopping the Doak Walker Award winner a yard short of a first down and forcing the Tide’s first punt. Cody Mandell punted away from Mathieu, 38 yards and out-of-bounds at the LSU 21.

A false start on the first play put the Tigers behind the chains early, and they weren’t able to recover. Wing’s second punt was fielded by Maze at the 25 after traveling 54 yards. Maze bolted through a rare hole in LSU punt coverage and returned 49 yards to the LSU 26, where he stepped out of bounds after injuring his hamstring midway through the run.

Starting deep in LSU territory, McCarron again connected with Smelley for 16 yards to the 10. A run by Richardson went for no gain before the Tide took a shot at the endzone that was far out of Williams’ reach. A short pass to Smelley was defended well by linebacker Ryan Baker, and the Tide settled for a 23-yard field goal by Jeremy Shelley.

Alabama led 3-0 with 5:00 remaining in the opening quarter.

LSU begans its drive at the 27, but another negative play on first down put the Tigers in a hole they couldn’t get out of. Wing’s 45-yard punt was fair caught by Christion Jones at the Alabama 11.

Alabama’s tight ends continued to find success, as Smelley and Chris Underwood caught passes of 9 and 8 yards to the Alabama 25. On first down, McCarron took his first look down the field and found Norwood who made a high grab over Mathieu and managed to stay in-bounds for 26 yards.

The Tide faced a fourth-and-4 at the LSU 32 but rather than kick a long field goal, McCarron took the snap as the holder and flipped a pass to Underwood. The receiver eluded Mathieu and gained just enough yardage to keep the drive alive. Four plays later, Shelley re-entered for a 42-yard field goal attempt that was blocked by LSU defensive tackle Michael Brockers.

Another false start on the first play from scrimmage halted the Tigers’ momentum before it could gain traction, and Wing came on for another 47-yard punt to the Alabama 25.

For the first time in the half, Alabama made a point to get Richardson involved. The Heisman candidate used a 20-yard counter to the LSU 25 that setup a 34-yard field goal by Shelley.

The Tigers’ final drive of the half was again stymied by its own mistakes, as a fumbled snap on by Jefferson on third-and-5 left LSU three yards short of the first-down marker.

Wing’s 48-yard effort gave Alabama its final drive of the half with 1:59 remaining. The Tide worked its way to the LSU 24, keyed by a 20-yard grab by Norwood on second-and-12. Shelley’s third field goal of the half gave Alabama a 9-0 lead as time expired.

Alabama received the opening kickoff and Jones returned to the 32, where Alabama picked up the pace offensively. A pass to Norwood went for 19 yards before McCarron caught LSU out of formation and connected with wide receiver Kenny Bell for 26 yards to the LSU 23. Four plays later, Shelley set a BCS Championship game record with his fourth field goal, this time from 35 yards.

LSU came out throwing on its first drive of the second half, but after a 19-yard pass to Beckham Jr., Jefferson couldn’t overcome a second-down sack. Wing sixth punt of the evening was fielded at the 10 where gunner Ron Brooks tackled Jones immediately. It was ruled that Jones indicated a fair catch, and Brooks was charged with a personal foul.

McCarron continued to look Norwood’s way, as the pair connected for 24 yards to the Alabama 49. LSU’s defense stiffened and forced a punt, which sailed into the endzone for a touchback.

Jefferson came out throwing again but instead of running through an opening on second-and-11, he tried a shuffle pass in the direction of Spencer Ware who had turned to block. The ball was intercepted by linebacker C.J. Mosley, who was tackled immediately by Jefferson and landed awkwardly on his knee.

The mistake cost the Tigers another field goal, as Shelley was good from 44 yards to push the Alabama advantage to 15-0 with 22 seconds remaining in the third quarter.

Midway through the fourth quarter, the Tigers defense got a stop deep in Alabama territory after a sack by linebacker Kevin Minter, and LSU got its best field position of the game when it started at the 35.

The Tigers gained first downs on a 7-yard run by Hilliard and an 18-yard run by Jefferson, however, consecutive incomplete passes and a sack on fourth down ended the threat.

Alabama took over at midfield, and Richardson scored the game’s final points with a 33-yard touchdown.