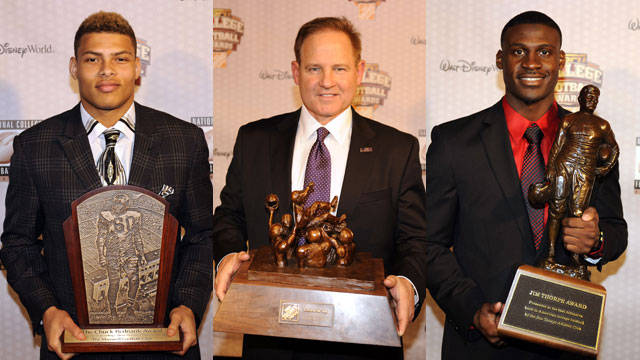 ORLANDO, Fla. – For the second straight year, LSU is the proud home of college football’s defensive player of the year and top defensive back as Tyrann Mathieu won the Chuck Bednarik Award and Morris Claiborne captured the Jim Thorpe Award on Thursday night at the ESPN College Football Awards from the Atlantic Boardwalk at Walt Disney World.

In addition, both players were named to the prestigious Walter Camp All-America First Team. LSU head coach Les Miles formally received The Home Depot Coach of the Year Award for leading the Tigers to a 13-0 record, a Southeastern Conference Championship and a BCS National Championship Game appearance. Defensive coordinator John Chavis was on hand as the recipient of the Broyles Award as the nation’s top assistant coach.

Mathieu, who is also a finalist for the Heisman Trophy, won the Bednarik Award as the nation’s best defender over Alabama’s Dont’a Hightower and Penn State’s Devin Still. Former No. 7 and teammate Patrick Peterson won the honor last year. LSU has now claimed more Bednarik Award winners than any school in the SEC. Georgia is the only other program to win one when David Pollack did so in 2004.

“It’s an honor to be recognized with this award, especially when you look at how good the other finalists are,” said Mathieu. “I accept this on behalf of our entire team and coaches. We take pride in our defense at LSU and that’s to be dominant every day. To win the award that Pat (Peterson) won last year is just a great feeling.”

Mathieu will now join the four other finalists for the Heisman Trophy for a flight to New York on Friday morning. The 77th-annual Heisman Memorial Trophy will be presented live Saturday on ESPN at 7 p.m. CT from the Best Buy Theatre in Times Square.

Claiborne, the SEC Coaches Defensive Player of the Year, finished second in the SEC in interceptions with six this season and his 11 career interceptions ranks sixth in LSU career annals. LSU joins Texas as the only schools to produce back-to-back Thorpe Award winners since the inception of the award in 1986.

“I am excited to be a part of the Thorpe family of winners,” said Claiborne. “We have so many great players at LSU and they push me everyday to get better. Winning this award is not possible without my teammates, Coach (John) Chavis and Coach (Ron) Cooper. We are proud to bring the Thorpe Award back home again to LSU.

Claiborne will be formally presented with the award at the 25th anniversary Jim Thorpe Award Banquet on Tuesday, Feb. 7, in Oklahoma City. The award will be presented by Patrick Peterson.

Home Depot Coach of the Year Award by Year