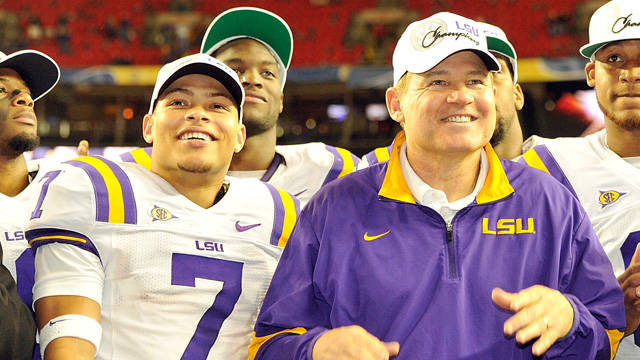 BIRMINGHAM, Ala. – LSU football added to its prestigious list of postseason honors as the Tigers were the only team in the Southeastern Conference to place double-digit players on the Associated Press All-SEC First and Second Teams with a total of 11 players earning the distinction on Monday.

In addition, Les Miles was named SEC Coach of the Year and Tyrann Mathieu was the recipient of the SEC Defensive Player of the Year award, the organization announced.

Mathieu was a unanimous selection on the first team and he was joined by offensive guard Will Blackwell, defensive end Sam Montgomery, cornerback Morris Claiborne and punter Brad Wing. Wing was the only freshman on the first or second team.

Miles becomes the second coach in LSU history to earn SEC Coach of the Year honors by the Associated Press. In 2011, Miles led the Tigers to school records in wins (13), SEC victories (eight), wins over Top 25 ranked teams (eight), double-figure wins (12) and games with 40 or more points (nine).

Miles spearheaded LSU to the BCS National Championship Game, an 11th SEC Championship title and he helped the Tigers to their first perfect regular season since 1958. In now seven years, Miles has put together an impressive 75-18 record, including a 31-13 mark against ranked teams. LSU will finish the year with its fourth top-five ranking under his watch.

Mathieu becomes only the second player in school history to win Associated Press SEC Defensive Player of the Year, joining Glenn Dorsey who did so in 2007. The sophomore has been terrific all over the field, leading the Tigers in tackles (70), forced fumbles (six) and fumble recoveries (five).

“It’s a blessing to receive this honor,” said Mathieu. “I accept the honor on behalf of my teammates and coaches. It’s been a great season, and I couldn’t have accomplished this without those guys who have been with me every step of the way. I am truly honored to be SEC Defensive Player of the Year and we all look forward as a team to the (BCS) Championship Game.”

Mathieu also became the first LSU player since Todd Kinchen in 1991 to return punts for touchdowns in consecutive games with a 92-yarder against Arkansas and a 62-yarder that swung the momentum of the SEC Championship Game. The SEC Championship Game MVP, Mathieu currently holds the LSU single-season and career record for forced fumbles.

LSU has placed 25 players on the AP All-SEC first team and 42 total players on the first and second teams since head coach Les Miles‘ first season in 2005.