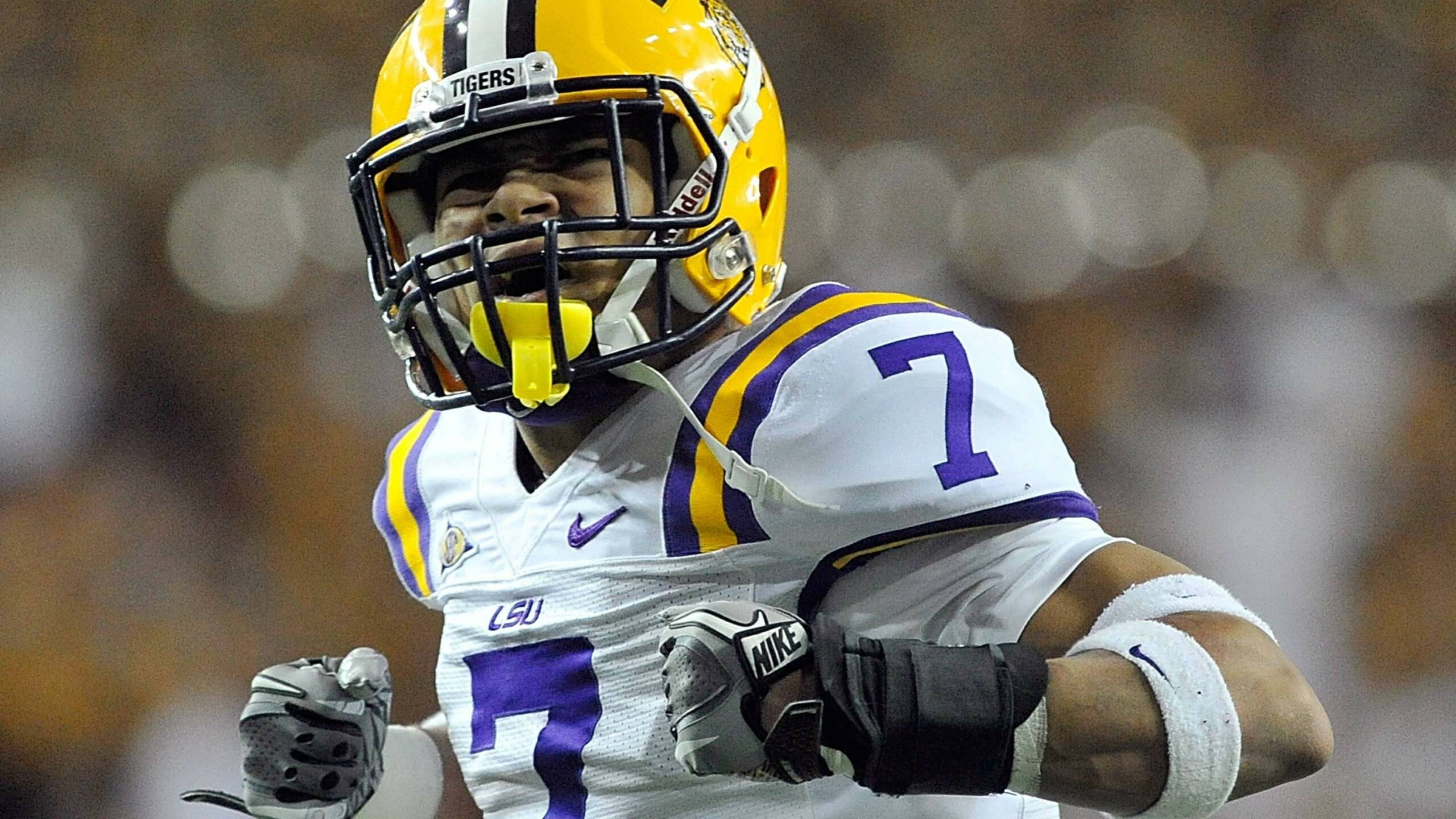 BATON ROUGE — SEC Championship Game MVP Tyrann Mathieu dazzled the crowd with a punt return for a touchdown and setup two more scores with his return and a fumble recovery, as No. 1 LSU buried No. 12 Georgia, 42-10, for its 11th league title and a berth in the BCS National Championship.

The Tigers fell behind 10-0 in a first quarter. However, as they began to shut down the Bulldogs’ high powered attack, Mathieu’s 62-yard touchdown salvaged a second quarter. After a scoring drought in the first half, the Tigers’ defense and special teams opened the flood gates in the third quarter.

Freshman running back Kenny Hilliard polished off all three drives with touchdowns, as the Tigers set a championship game record with 21 points in the quarter. Two of the scores were setup by turnovers sandwiching Mathieu’s elusive 47-yard punt return to the Georgia 17.

After leading 10-7 at the half, Georgia managed only 35 yards in the third quarter, as quarterback Aaron Murray was intercepted by Morris Claiborne and was stripped of the ball at his 26. Of course, the fumble was covered by Mathieu.

In the fourth quarter, LSU put the game on ice with a 48-yard touchdown run by Alfred Blue and a 45-yard interception for a touchdown by Claiborne, who left Murray in his wake as the Tigers have done in the second half all season.

Including today’s 35-0 roll-up of of the Bulldogs, the Tigers have outscored opponents 264-61 in the second half this season.

While it was led by its defense once again, LSU’s running game came alive in the second half. Hilliard had eight carries for 72 yards and touchdown runs of 15 and 4 yards. He added an 8-yard touchdown reception to cap his three-score third quarter.

Blue became the third LSU running back to eclipse 500 yards rushing this season, as the sophomore added 94 yards on eight attempts with a 48-yard touchdown run in the fourth quarter. Michael Ford added 34 yards on six runs.

Starting quarterback Jordan Jefferson was 5-of-13 passing for 30 yards with the touchdown pass to Hilliard.

Murray, who was sacked four times, completed only 16-of-40 passes for 163 yards with two interceptions and a touchdown with 42 seconds remaining in the first quarter. His backup, Hutson Mason, entered in the fourth quarter and was 4-of-11 for 55 yards.

Georgia was held to 37 rushing yards through three quarters, while backup Ken Malcome equaled that total with a team-high 37 more when the game was out of reach in the fourth quarter. Starter Isaiah Crowell strugged with only 15 yards on 10 carries, while his backup Carlton Thomas had 28 yards on seven tries. Tight end Orson Charles led the way for Georgia with 42 yards on four catches.

Defensively, LSU gave up scoring drives of 40 (field goal) and 44 yards (touchdown) in the opening quarter but stiffened long enough to give Mathieu a chance to make game-changing opportunities. The Tigers forced three turnovers while committing none.

Safety Eric Reid had a game-high seven tackles, while linebacker Kevin Minter and Michael Brockers added six each. Brockers had two of LSU’s nine tackles for loss. Mathieu had four tackles, while all three of Kendrick Adams‘ tackles were behind the line.

LSU had little go its way offensively in the opening half, as Georgia took the advantage in field position and didn’t give it up.

The Bulldogs won the coin toss and deferred the decision until the second half. Claiborne brought the opening kickoff out of the endzone but managed only 15 yards on the return. On third-and-7, Jefferson was sacked by linebacker Cornelius Washington.

Brad Wing‘s 50-yard punt was fair caught at the Georgia 38, where Murray connected with King behind the Tigers secondary for a 44-yard gain to the LSU 21. A false start on third down pushed the Bulldogs to the 22, where Murray’s pass into the endzone was just out of the reach of King.

The Bulldogs settled for a 40-yard Blair Walsh field goal and led 3-0 with 11:45 remaining in the quarter.

Walsh then executed a perfect on-side kick that was recovered by Alec Ogletree at the Georgia 49.

Murray connected with wide receiver Malcolm Mitchell for 13 yards to the LSU 40 and then overcame a holding penalty with a 19-yard pass to Charles. A LSU holding penalty by Claiborne on third-and-1 gave the Bulldogs new life, but Mitchell dropped a sure touchdown at the 7-yard line on third down and Walsh sliced a 45-yard field goal to the right.

However, LSU was unable to immediately take advantage of a momentum swing, as Jefferson came up two yards short of a first down and the Tigers went three-and-out for the second time.

The teams traded punts, as Georgia’s Drew Butler pinned LSU at its 8 with a 62 yarder and Wing managed only 38 yards from his endzone.

Georgia took over at the LSU 44 where Thomas gained 16 yards and a first down. On third-and-6, Murray found Charles across the middle for 11 yards to the 12. On the next play, the Bulldogs quarterback connected with tight end Aron White for touchdown.

Georgia led 10-0 with 42 seconds remaining in the first quarter. But, it would be the last time the Bulldogs cracked the scoreboard.

The second quarter featured a grand total of seven punts and only 2 yards of total offense between the great defenses.

The Tigers got the better end of the special teams play when defensive end Sam Montgomery sacked Murray at the Georgia 3 and forced Butler to punt out of his endzone.

Mathieu back-peddled more than 10 yards to field a booming 59-yard punt at his 38 with room to run. With the help of blocks by Josh Johns and Russell Shepard, the sophomore nicknamed the “Honey Badger” took the ball from the left numbers to the right hash marks, broke a tackle just past midfield and dodged another before zigzagging around Butler for a 62-yard touchdown return.

His second such touchdown return in as many games pulled the Tigers within three, 10-7, with 5:48 remaining in the half — and began a streak of 42 unanswered points.

Again, the Tigers offense wasn’t able to capitalize on its final two possessions of the half. The Tigers were held without a first down and had only 12 yards of offense prior to the break.

In the second half, the game changed in LSU’s favor with two forced turnovers, a 47-yard punt return by Mathieu and three touchdowns by Hilliard.

On the first series of the half, Murray scrambled from the pocket on third-and-9 but was caught from behind by linebacker Barkevious Mingo and Brockers, who knocked the ball loose.

Mathieu pounced on the ball at the Georgia 27 and gave the Tigers offense a much needed short field to work with. After a 6-yard reception by Rueben Randle, Hilliard got a block by tight end Chase Clement and rumbled 15 yards for his first score of the quarter. LSU led 14-10 with 12:51 left in the third quarter.

Murray continued to be harassed by Adams and the LSU front four. He was forced out of the pocket on third-and-10, and Bulter entered to punt to Mathieu again.

Mathieu was more than happy to take another shot at the endzone, as the shifty sophomore caught the ball at his 35 and immediately dodged two defenders and snuck inside Johns’ block into open space across midfield. Faced with a wall of Bulldogs, Mathieu stutter-stepped at the Georgia 42 to shake two of them, split between three more and shook off an ankle tackle at the 34. He regained his balance at the 29, avoided an arm tackle and shot through a gap before the last Georgia defender grabbed his left foot to stop Mathieu at the Georgia 17.

In prime position once again, LSU’s offense needed only four plays to score. Jefferson’s first-down pass to Odell Beckham Jr. was initially ruled a touchdown before video showed the ball touched the ground. It didn’t stop the Tigers for long, as Hilliard stiff-armed a Georgia defender near the goalline and powered through to the endzone.

Georgia gained two first downs to its 30, and looked to make a big play on first down to stop the LSU onslaught, Murray looked for King along the right sideline, but Tharold Simon jumped high to intercept the pass at the LSU 30.

Jefferson, Ford and Blue each had first-down runs to put LSU at the Georgia 9-yard line. On second-and-goal, Jefferson faked a handoff to Spencer Ware, rolled to his right and connected with Hilliard from the halfback position at the 10. The freshman put his left shoulder into a Georgia cornerback at the 5 before jogging into the endzone. His third touchdown of the quarter — another championship game record — gave LSU a 28-10 lead with 3:45 on the clock.

The Tigers added two more scores in the fourth quarter. After Hilliard ran three times for 45 yards, Blue followed with a 48-yard. Later, Claiborne intercepted Murray’s final pass and returned 45 yards for a touchdown and the Tigers’ largest margin of victory in the showdown between the SEC’s Eastern and Western Divisions.