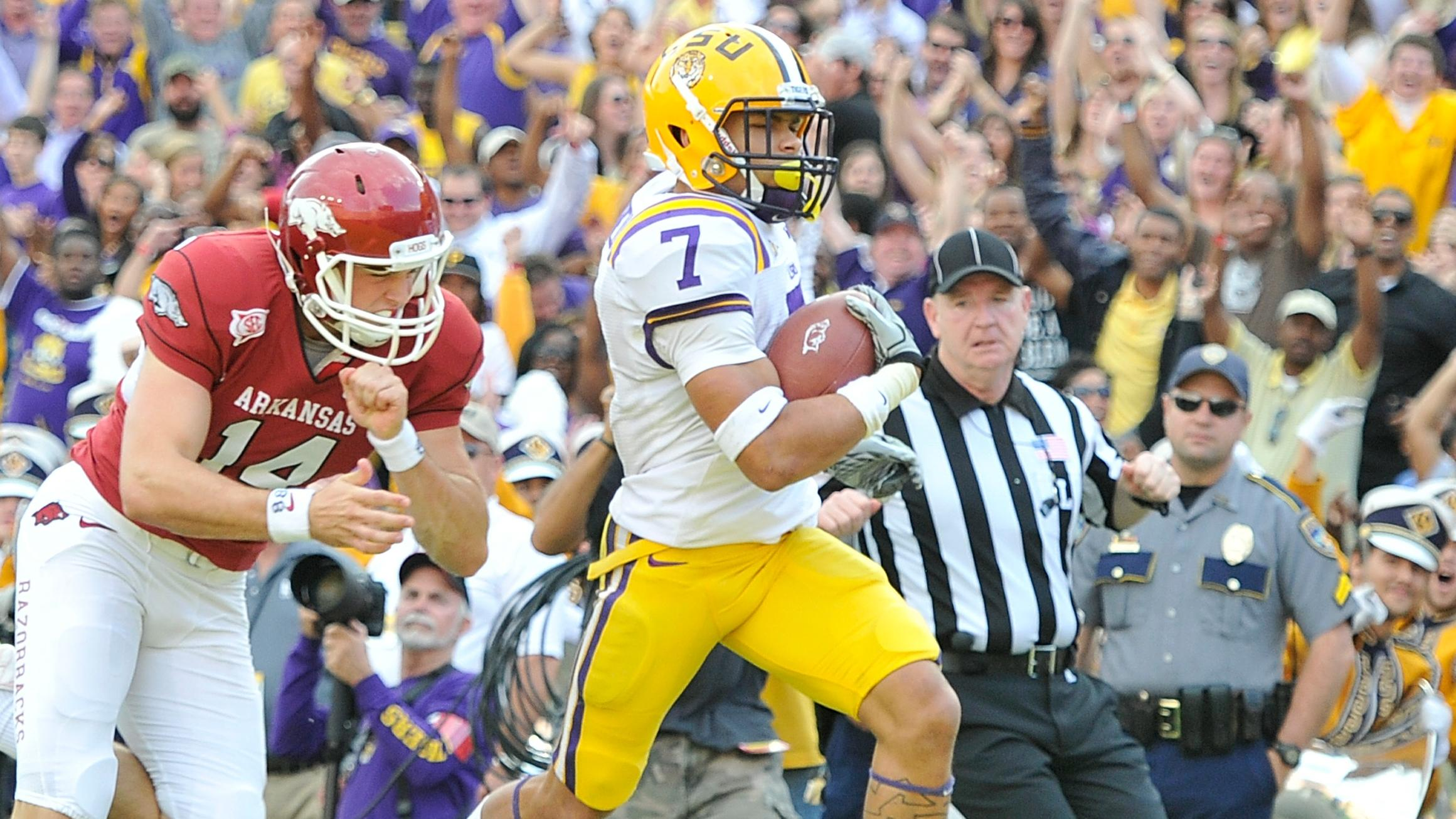 BATON ROUGE — After facing its largest deficit of the season, No. 1 LSU shrugged its shoulders then shredded No. 3 Arkansas on Friday at Tiger Stadium, 41-17.

Undefeated in the regular season for the first time since 1958 (10-0), the Tigers improved to 12-0, won the brutal Southeastern Conference Western Division at 8-0 and will face Georgia (9-2, 7-1 SEC) in the SEC Championship game on Saturday, Dec. 3, in Atlanta’s Georgia Dome. Kickoff is set for 3 p.m. CT on CBS.

It was the largest margin over a top-5 team in school history, and the largest victory over Arkansas since 2004 (43-14). LSU extended the nation’s longest winning streak to 13, including victories over eight ranked opponents.

All of the Tigers 2011 accomplishments looked to be in doubt when Arkansas went up 14-0 with 12:11 left in the first half. Arkansas linebacker Alonzo Highsmith picked up a fumble by LSU running back Michael Ford and returned 47 yards for a touchdown that quieted the second-largest crowd in Tiger Stadium history (93,108).

The Tigers bounced back in a big way, scoring 21 points in a span of 4:16 including a 6-yard touchdown run by running back Kenny Hilliard, a 92-yard punt return by Tyrann Mathieu that tied the game, and a 9-yard touchdown catch by Russell Shepard from quarterback Jordan Jefferson.

Arkansas (10-2, 6-2 SEC) was stunned and never recovered. After giving up the lead late in the second quarter, the Razorbacks managed only three points and 111 yards for the rest of the contest.

LSU’s running attack was bruising once again, as Hilliard rolled for 102 yards on 19 carries, Ford added 96 yards on 11 touches and Spencer Ware had 37 yards on eight rushes. Hilliard, Ware and Jefferson each scored on the ground.

Defensively, Mathieu had a team-high eight tackles with an interception and two forced fumbles. Barkevious Mingo and Ron Brooks added six tackles each, and combined for three of LSU’s five sacks.

The Tigers allowed only 50 snaps to the high-powered Razorbacks offense, of which nine resulted in tackles behind the line of scrimmage.

Arkansas quarterback Tyler Wilson finished 14-of-22 passing for 207 yards with a touchdown and an interception. Greg Childs was his top target with three grabs for 40 yards, while running back Dennis Johnson led his team withonly  31 yards on 10 carries. The Razorbacks had 47 net yards rushing on 28 carries.

Arkansas won the coin toss and elected to put its offense on the field right away. LSU placekicker James Hairston kicked the ball into the south endzone and the Razorbacks started the game at its 20.

With the Tiger Stadium crowd deafening, Arkansas was called for a false start on second down before Wilson escaped the pocket and was stopped a yard short of the first down marker on third-and-15. Arkansas punter Dylan Breeding changed the course of the opening quarter when he hit a 71-yard punt that was fielded by Mathieu at the LSU 1 and returned seven yards to the 8.

After a 1-yard sack of Jefferson on second down, the Tigers also came up a yard short of the first down and Brad Wing came on for his first punt.

Wing’s 42-yard effort was downed at the Arkansas 41, where the Razorbacks picked up the first first-down of the game on a 15-yard pass from Wilson to wide receiver Cobi Hamilton at the LSU 44. However, the Tigers defense stiffened and forced another punt by Breeding. After flipping the field on his first effort, the Hogs punter landed his second kick at the LSU 3 and forced another long field for the Tigers.

A 12-yard run by Hilliard and a 12-yard catch by Beckham Jr. got the Tigers out of the shadow of the endzone, but the drive stalled when Beckham Jr. was called for a false start on second-and-6 at the LSU 31. Jefferson was sacked for a 10-yard loss on third down, and Wing entered for another 42-yard punt.

Arkansas went to its ground game to creep into LSU territory, as Green rolled for 11 yards to the LSU 43 on third-and-2. On third-and-4, Wilson escaped from the pocket and picked up just enough yardage to advance the chains at the LSU 33. Another third-down conversion was good for 16 yards from Wilson to wide receiver Greg Childs. On the first play of the second quarter, Wilson tossed a 13-yard touchdown pass to wide receiver Jarius Wright.

LSU trailed in Tiger Stadium for the first time since the 2010 Ole Miss game, as Arkansas led 7-0 with 14:54 left in what would be an eventful second quarter.

On the ensuing drive, the Tigers picked up two first downs with passes to Randle and Beckham Jr. to their 41. However, Ford was separated from the ball by safety Tramain Thomas after getting a pitch from Jefferson. Highsmith caught the ball and ran untouched for a 47-yard touchdown.

Just at the right moment, LSU’s offense clicked for the first time. The Tigers overcame a false start early in the drive when Arkansas committed a personal foul face mask for a first down to the LSU 42. The Tigers were able to get past another pre-snap penalty with a 14-yard run by Ford and a 3-yard run by Hilliard on third-and-1. Hilliard’s pair of 7-yard gains gave LSU a first down at the Arkansas 20. On third-and-6, tight end Deangelo Peterson caught the pass from Jefferson and stretched for a first down at the 10. Two runs later, Hilliard barreled in for a 6-yard touchdown.

With the crowd and the Tigers re-energized, Wilson was sacked for a 14-yard loss by Mingo. The Razorbacks overcame the big loss when the cornerback slipped and Wilson connected with Joe Adams for 20 yards to midfield. Safety Craig Loston, who was in the game in place of injured Eric Reid, stopped the drive with a pass breakup and forced a key punt.

Breeding’s 42-yard punt was fielded by Mathieu at the 8-yard line. With a wall of Razorbacks between him and the 15, Mathieu split the defenders and started a mad dash along the left hashmarks to the north endzone for a 92-yard game-changing touchdown. It tied the third-longest punt return in school history.

LSU wasn’t done with its second-quarter blitz. Though Arkansas quickly advanced into Tigers territory after two first-down catches by Childs, Mathieu ripped the ball from Johnson and cornerback Ron Brooks recovered at the LSU 34. Johnson was ruled to be down on the field, but the play was overturned by video review.

With 1:59 remaining in the half, LSU put its offense to work and took the lead before halftime. Jefferon found wide receiver Kadron Boone for a 17-yard gain to the Arkansas 49. Catches of 18 and 22 yards by Randle put the Tigers at the 9 where Jefferson found Shepard crossing the field for a touchdown and its first lead of the game.

The Tigers looked to continue the scoring streak on the first drive of the second half, as Jefferson guided LSU to its 45 before finding Randle behind the defense for a 38-yard catch to the Arkansas 17. However, on the next play, Jefferson was intercepted while looking to squeeze a pass along the right sideline to tight end Chase Clement.

Arkansas used a 60-yard catch and run by Hamilton to setup it only score in the 41 minute of the game, a 29-yard field goal by Zach Hocker. The Razorbacks cut the Tigers’ advantage to 21-17, but would get no closer.

LSU went to its ground attack — including a 49-yard run by Ford to the Arkansas 6 — to get close, but couldn’t punch it into the endzone. A 21-yard field goal by Drew Alleman pushed LSU’s lead back to seven, 24-17, with 2:14 remaining in the third uarter.

An 8-yard sack by defensive end Sam Montgomery led to a quick three-and-out by the Hogs, and Mathieu’s 16-yard punt return gave LSU possession at the Arkansas 45. The last of nine-straight runs on the drive was a 7-yard touchdown by Ware. LSU led 31-17, with 11:04 left.

An interception at midfield by cornerback Morris Claiborne put the Tigers back on the field with 10:57 remaining, where Jefferson faked a handoff and ran up the middle for a 48-yard touchdown and a 38-17 lead.

With 5:08 remaining, the Tigers tacked on a 37-yard field goal, Alleman’s 10-straight, for the final margin.

LSU will be the home team in the SEC Championship game and wear its white jerseys.

Georgia, which has faced LSU twice in the league’s title game, faces rival Georgia Tech at 11 a.m. CT on Saturday in Atlanta after clinching the SEC Eastern Division last weekend.