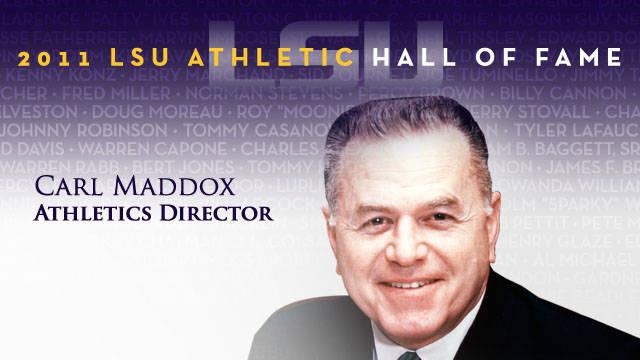 Carl Maddox’s reputation when he came to the athletic director’s chair at LSU in 1968 was that of a builder.

It’s a reputation that carried through his tenure as Tiger AD as he expanded the athletic menu in Tigertown and changed the landscape of facilities at LSU that would shape the modern era of a program that has men’s and women’s programs that compete for national championships on a regular basis.

It is for that ability to “build” that Carl Maddox will be inducted posthumously in the LSU Athletic Hall of Fame in ceremonies on Friday, Sept. 9 at the Pete Maravich Assembly Center.

Maddox, outside athletics, did what students had been clamoring for since 1939 – build a student union building on the campus. But it was 1958 before a plan was submitted to the Board of Supervisors and a student referendum passed in which students voted to self-assess a fee.

Maddox became the first director of the student union in 1959 and worked with the Board planning for three years, eventually finding a site on the Memorial Oak Grove in the center of campus. Construction began in 1962, and the official ribbon-cutting ceremony to open the new building was Jan. 6, 1964.

By 1968, LSU was in need of a new athletic director after the untimely death of AD Jim Corbett and the subsequent decision to retire by long-time coach Harry Rabenhorst, who served his last few months in the department as Corbett’s successor.

The Board continuing its long-standing LSU policy of keeping the head football job and AD position separate chose Maddox over football coach Charles McClendon and gave him a salary of $23,500. In picking the 55-year-old Maddox the board said Maddox had “demonstrated administrative and executive ability in his position as director of the LSU Union and has the athletic background.”

Maddox, the son of a college mathematics professor, was born in Magnolia, Ark., but after a stop in Stillwater, Okla., the family settled in Natchitoches as Maddox entered the third grade. His dad became the head of the math department at Louisiana Normal (now Northwestern State) and Carl – who skipped a grade in elementary school and completed his college work in three years – graduated from Normal in 1932, at the age of 19.

His high school coaching career was interrupted by a Navy stint on a motor torpedo board during World War II.

After his state championship season, he joined Gaynell Tinsley’s LSU staff in 1954 as the Tigers’ offensive backfield coach.  But as often happens in football, a 5-6 season led to the firing of both Tinsley and shortly thereafter, athletic director T. P. “Skipper” Heard.

Paul Dietzel was selected to succeed Tinsley as head coach and Maddox was retained as assistant coach where in his six years as assistant coach he played an integral part in building LSU football to a national title in 1958 and ultimately the juggernaut program that it is today.

Maddox knew his goal the moment he became the head of the LSU Athletics Department.

“From day one,” Maddox said, “I wanted to have the best overall varsity program in the conference. Our conference is competitive enough that if you do well in the Southeastern Conference, you are likely to be nationally-ranked. To achieve that, you’ve got to give coaches the tools to work with, and primary among those tools to work with are facilities for each sport.”

So began his quest for the growth in LSU’s athletic facilities and the dawn of the age of women’s varsity sports on campus.

The opportunity to compete in volleyball, basketball, gymnastics, tennis and swimming helped add to the foundation of a true women’s sports program at LSU and in the process Maddox added the sports of cross country, gymnastics, wrestling and swimming for men.

He also went out and found coaches like D-D Breaux, who is still coaching the sport to an elite status at LSU, and a basketball assistant from Minot, N.D., named Dale Brown.

Maddox stuck by the coach through some tough early years at LSU when Brown’s philosophy seemed to not be working.

“You continue to do the job exactly like you’re doing it. Show the discipline that you’re showing and I’ll back you a hundred percent,” Brown recalled Maddox telling him. Soon Brown would take the LSU program to unprecedented heights.

Tiger Stadium was experiencing growing pains in the 1960s and people were demanding a chance to sit in one of college football’s meccas. During the sixties, AD Jim Corbett commissioned a feasibility study on enlarging Tiger Stadium capacity to 100,000. It never got beyond the study stage. In 1971, Maddox decided it was time to move ahead, his feelings triggered when 10,000 new season ticket applications arrived the first day for the mere 500 available seats.

“It’s getting to the point,” he observed, “where our graduates cannot see the football team play.”

In the fall of 1972, a new study to the Board showed 10,000 seats would cost $7 million but funds weren’t available and the project was again shelved. A second study was made in which 7,500 seats could be added for $6 million. In May of 1974, the board gave the green light, but the bids came in some four million over projections.

The LSU administration began looking for assistance and found it in a $5 million subsidy from the legislature. That, along with monies from three other sources got this stadium addition that would be a part of the stadium until 2004 when a new upper deck was built on the West side.

Work began in August of 1975 and the addition was accepted just days before the 1978 season opener against Indiana. It was the fitting going away present for Maddox who would have to relinquish the AD’s chair to Paul Dietzel the week following the Indiana game because he reached the mandatory retirement age of 65.

Maddox during his time made other facilities a priority as well, overseeing the construction of the LSU Field House that now bears his name, the LSU Assembly Center, the Bernie Moore Track Stadium, the LSU Tennis Stadium, and four football practice fields. He also introduced lights at the old Alex Box Stadium for night baseball.

But Maddox wanted to do so much more when he left the campus. He felt he was a young 65. Mississippi State saw that and grabbed Maddox as their athletic director, a position he held for the next five years.

“I really wasn’t ready to retire,” he said. “I guess I never looked at my job as going to work. I was just going to something I wanted to do.”

During his time in Starkville, Maddox made revitalizing athletic facilities a priority. The construction of new track and tennis facilities, adding lights to practice fields and the expansion of Scott Field were among many Maddox accomplishments at Mississippi State.  He added the sports of women’s golf and softball to the athletic menu.

Today, the track at the outdoor facility at MSU is also named in his honor. When money wasn’t available for a facility upgrade, Maddox negotiated a deal with the Mississippi National Guard to provide all the engineering and much of the labor as a training exercise.

“We got a $3 million facility for about $250,000, plus we had to feed and house the national guard,” said Larry Templeton, who would later serve as Mississippi State AD after serving as an assistant under Maddox. “While he was the most difficult individual I ever work for or with, he was the most lovable individual I’ve ever been associated with.”

Even after leaving MSU in 1984, Maddox wasn’t ready to relax and spent more than a year helping organize the National Sports Festival event in Baton Rouge. In 1986 he received the James J. Corbett Memorial Award presented by the National Association of Collegiate Directors of Athletics for Lifetime Achievement in Athletic Administration.

“The kind of recognition that is most rewarding is one from your peers,” Maddox said. “I had a hard and fast rule. Never spend more than you make. It never occurred to me to do anything else.”

The surpluses at LSU in his tenure ranged from $48,000 to $300,000 and that money, Maddox said, was always used to upgrade facilities.

He is a member of the Louisiana and Mississippi Sports Halls of Fame, the LSU Tiger Hall of Distinction, The Northwestern State University Athletic Hall of Fame and the LSU Alumni Hall of Distinction. He passed away in 1996 at the age of 83.