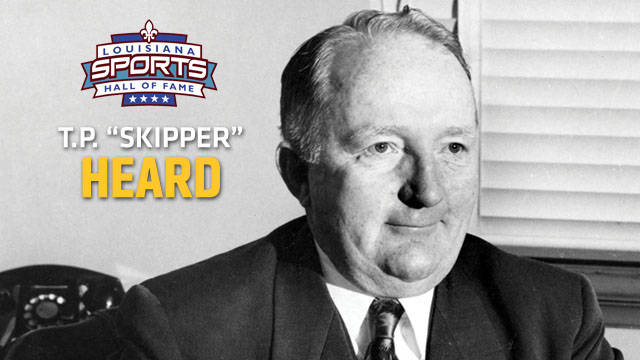 Editor’s Note: The 2011 class of the Louisiana Sports Hall of Fame will be inducted Saturday at ceremonies at the Natchitoches Events Center. This year’s class includes two with LSU ties – former Athletic Director, the late T. P. Heard, and baseball star Todd Walker. Today, LSUsports.net looks at what brought Heard to the Hall of Fame and Tuesday, the career of Walker will be highlighted. Friday, from Natchitoches, Senior Associate SID Kent Lowe will report from the site of the Hall of Fame about LSU’s contributions to the Hall and this year’s LSU inductees.

More than eight decades after he arrived on the scene, his fingerprints remain all over the LSU athletic program.

A case could be made that in the 118-year history of Tiger sports no one – not Doc Fenton, Billy Cannon, Pistol Pete or even the Kingfish, Huey Long – left an deeper imprint on the program, which owns an Southeastern Conference-leading 43 national championships, than Thomas Pinckney Heard.

A force behind three expansions of Tiger Stadium (1931, 1936, 1954) – in which the arena grew from 12,000 to 67,500 without which LSU could not evolved into the potent football entity it has become – Heard, known as “Skipper.” was the far-sighted athletic director when the Tigers became a charter member of the SEC (1933); when LSU first hooked up with 50,000-watt clear-channel WWL-AM (1942), giving the Tigers a national broadcast platform; when LSU became one of the first teams to fly to faraway inter-sectional football games (1939). He even coached the LSU golf team to a national championship (1947).

Heard was also an early pioneer in the establishment of legal and above-board athletic grants-in-aid, and is described in Times-Picayune columnist Peter Finney’s book “The Fighting Tigers” as “a man who might well be considered the father of the tremendous sports plant on today’s Baton Rouge campus.”

He’s an overdue but logical inductee in the Louisiana Sports Hall of Fame. That will take place Saturday, June 25 in Natchitoches, with Lt. Gov. Jay Dardenne speaking about his impact, and grandson Will Wilton accepting the honor on behalf of a man who shaped the destiny of LSU sports.

Prime example is relayed from Finney’s tone in which he writes, “The first addition to the stands in Tiger Stadium reflected the shrewd business sense of LSU’s graduate manager. Later, though the grapevine, Heard learned that LSU president James M. Smith had $250,000 earmarked for dormitories. Armed with that knowledge he proceeded to sell Smith on the idea that the president could have his dormitories in the stadium simply by raising the stands on both sides and extending them to each goal line. Explained Heard: “What it meant was, for $250,000, the president got his dormitories and we increased the seating capacity.”

The filled-in dorms eventually housed 1,500 students and the stadium grew by 10,000 seats.

But what Heard will forever be remembered for is his invention of “Saturday Night in Tiger Stadium.” Night football, which changed the landscape of fall evenings in Louisiana – and gave LSU its signature sports persona.

The revolutionary change to night football came early, in 1931 when Heard was serving as “graduate-manager,” meaning he was given the responsibilities of running the program for Russ Cohen, too busy coaching the football team for anything else. In the vernacular of today, Heard was thinking outside the box, though he had a model to base the idea on: Loyola in New Orleans played Friday night football successfully for several years before LSU. Games under the lights was not a new idea. Illinois defeated Carlisle in an 1897 game played indoors at the Chicago Coliseum. But the concept of “after dinner” games was popularized at LSU.

There were several reasons Heard experimented with such a radical notion:

-First and foremost was the shift changes of refinery workers in Baton Rouge. Many couldn’t attend afternoon games, but they could in the evening and getting off work at 7 p.m. allowed laborers enough time to make 8 p.m. kickoffs.
Competition for fans also played a role. Tulane, then in its football heyday, was playing on Saturday afternoons. A late Tiger kickoff would allow more fans to take in the Green Wave – or other teams around the state – then motor to LSU. Loyola fans, used to nocturnal football, might also be lured into supporting two teams, one on Friday nights, the other on Saturday nights. The move extended LSU’s reach because an estimated 80 percent of Tiger crowds in those days came from within a 30-mile radius of Baton Rouge.
Then there was the factor – and this may have been the most important – of the scorching Louisiana afternoon heat in September. Those concrete seats that could get mighty hot at mid-afternoon were comfortable when the sun went down.

Anyway, for the princely Depression-era sum of $7,500, Heard took a gamble and installed lights, though success was not immediate. Rains swept across Louisiana during the early part of October, 1931 and just 6,000 fans were scattered in the 22,000-seat stadium when the Tigers beat Spring Hill 35-0. (Tulane drew about the same that afternoon when the Rose Bowl-bound Green Wave defeated Texas A&M, and about 4,000 watched Loyola-Chattanooga the night before). A week later, in a 19-12 victory against South Carolina LSU drew 10,000, also about the same as Tulane pulled in in its game with Spring Hill Badgers.

Still, the precedent had been set, and Heard had forever changed the setting of LSU football.

When Cohen resigned as football coach, Army’s Biff Jones was brought in. But Jones was also an instructor in military science and did not have extra time from his coaching to oversee the entire program. Thus, Heard became LSU’s second official athletic director but in reality continued as its first, and began building further on an enviable and long-lasting program. Dan Hardesty, who covered LSU athletics the Baton Rouge State-Times for six decades, described Heard’s tenure as “outstanding.”

But not every story has a fairytale ending. After more than two decades on the job, Heard was forced out of office in 1954 largely because of his persuasion of the state legislature to again enlarge Tiger Stadium by more than 20,000 seats enclosing the south end to 67,500.

It was a good idea, but not when Heard’s boss, LSU president Troy Middleton, wanted a badly needed new library to come first. Both projects eventually came to fruition, but when Heard’s idea prevailed, his fate was probably sealed.

Still, Heard got off the last word, or least the most memorable, on the subject.

Four years later, when LSU filled the expanded stadium for the first time with the new-ranked No. 1 Tigers playing undefeated Ole Miss, Heard was sitting in the press box he had built, watching the fans squeeze into the stands. “I wonder,” he said low, but loud enough for those immediately around him to hear, “how many people are at the library tonight?”