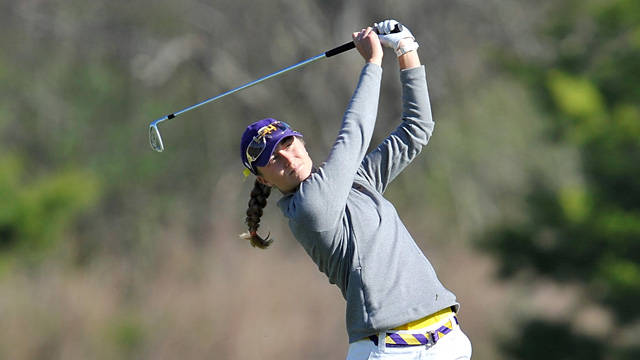 BATON ROUGE – The newly renovated University Club provided the test that it was designed for Friday in the first round of the LSU Tiger Golf Classic.

Two players broke par on the day, 53rd-ranked Natalie Sheary of Wake Forest, and 31st-ranked Catherine O’Donnell of North Carolina, at one-under par 71. The No. 1 player in the Golfstat Cup, Megan McChrystal of LSU, had a solid round of even par 72 and tied with Amanda Baker of North Carolina State, 17th-ranked Michelle Shin of Wake Forest and No. 2 Lindy Duncan of Duke.

The other Louisiana teams struggled a bit with the Tulane Green Wave, ranked 11th in the nation, is at 24-over 312, while Louisiana-Monroe is in 21st pace at 44-over 332.

While the wind that peppered the college-am Thursday subsided on Friday, the greens have firmed up after the rains of Tuesday and Wednesday and are giving a stern test to the nation’s best golf teams.

Senior Lindy LaBauve, playing as an individual in the tournament, had a good round of three-over 75 at a tie for 21st, while team counters included junior Tessa Teachman, who also shot a 75, junior Jacqueline Hedwall at 76 (tied for 29th) and freshman Austin Ernst at five-over 77.

The Green Wave was paced by Maribel Lopez Porras with a three-over 75 and Stephanie Wagstaff at 76, while ULM’s Lina Billing had a four-over 76 to lead the Warhawks.

The second round Saturday begins at 7:51 off hole No. 1 with the top three individuals and the top 12 teams going off, while action on the back nine will begin at 8:15 a.m. with the other three individual players and teams in 13th through 21st place.

On her performance today…
“The course went a lot easier than yesterday. There wasn’t as much wind out there. I thought the pin placements were really fair. The course was actually playing pretty short compared to yesterday. As I said, the pins were pretty fair so there were a lot of birdie opportunities out there. The greens are rolling great. It was perfect weather out. Everything was going right for everyone.”

On being tied for the lead…
“I think this course is definitely one shot at a time. They’ve changed the course a lot. If they change the pins it’s definitely going to get a lot harder so people are always going to make bogies out here. It’s just a matter of who can deal with it and be mentally strong.”

On how her team played today…
“I thought our team played well today. They managed the course well. You have to really think on this golf course and put the ball in the right spot. We told them (Thursday), if you miss the ball make sure you miss it on a side that you can get up and down and if you short side yourself you’re going to be in trouble. We were just trying to manage the course well and if we missed some greens, the students did a great job of putting themselves in a good place. They hit some good shots. I saw a lot of really good shots. The course is hard. The pins may be in easy spots but it’s hard if you get on the wrong part of the green. The greens make this golf course. It’s very, very difficult and you end up playing defensively. Last night we talked about just being patient, take the birdies when they come, be lucky, and just try to keep the high numbers off the score card.”

On the course and her performance today…
“I think I played to the right areas on the green. The greens are the most important thing on this course. They’re obviously the hardest part. I just stayed patient and really tried to make pars out there.”

On expectations for the rest of the weekend…
“For my team, I think we can play better. We struggled today, but I think we’re just getting used to the course. I expect our team to do really well the next few days. For me, I want to win the tournament and I think if I keep doing what I did today then I have a really good shot.”

On her performance today…
“I played pretty solid. There aren’t a lot of birdies out there so you just get par and go to the next hole and do it again. It’s tough out there. The greens are so firm. I’m pretty pleased with 72.”

On playing the rest of the weekend…
“I just have to keep taking it one hole at a time. I have to keep playing every hole and try to stick it closer and roll some putts. We just have to stay steady because it’s our home golf course so we should have the advantage, if any.”

On the team’s performance…
“I felt like going into the tournament that any team that shot less than 10 over par would be a good round. We ended up shooting 12 over, and really we just had a couple of holes that got us. We had some big numbers on some holes. Basically, it’s just a matter of making a few more putts here and there. I think the course played great and I think we’re in a position where we’re still in the middle of it all. There are two more rounds, and if we continue to just try to play smart and eliminate a couple of little mistakes, I think we’ll have a good chance.”

On the rest of the weekend…
“Well the weather is supposed to be beautiful, which really helps. There isn’t supposed to be very much wind so that’ll help as far as the golf course maintaining its playability. We’re just looking at trying to play steady.”