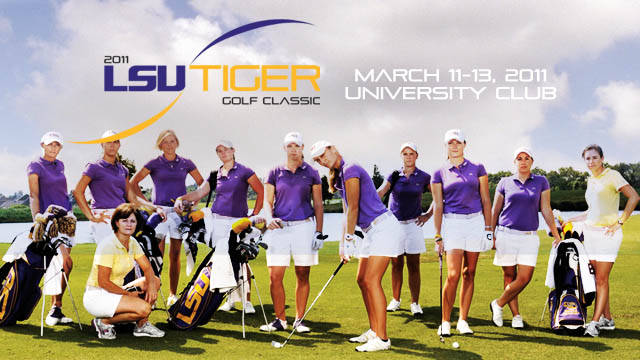 BATON ROUGE — It’s been two years since a college golf tournament has been staged at the home course of the LSU Lady Tigers, the University Club.

A lot has changed since the last LSU Golf Classic in 2009 and a course that in calm conditions teams could have their way with. Now with trees, hazards and completely redone greens, the par-72 layout is ready to welcome college golf back for tournament play.

Friday, over that  different and more challenging University Club layout, a field of 21 teams, including 16 in the top 50, will begin their 54-hole journey that will determine the champion by Sunday afternoon of the 2011 edition of the LSU Tiger Golf Classic.

The Lady Tigers, looking for their first win in the home event since 2005, has won the title seven times (including three times-2000, 2001, 2005-at the U-Club). The Lady Tigers, with a team win and three second place finishes this year, is ranked fifth in the latest Golfstat performance rankings.

But the field is formidable led by top-ranked Alabama with three team wins of their own. Also highly-ranked Duke (4) is back and the Blue Devils have a win over the old U-Club layout in 2007. No. 7 Virginia won the last tournament at the U-Club in 2009 with a team score of eight-under par 856.

“We are very excited to be back on our home course and to be able to host this event,” said LSU Coach Karen Bahnsen, who has played or coached in every LSU Lady Tiger-hosted event since 1982. “This is a tremendous field and we know those who follow our team will enjoy watching the action here this weekend. No one is really sure how the scores will be since this is the first time these teams have been here since the course was remodeled, but that certainly adds to the excitement of this year’s event.”

After heavy rains over the course Tuesday and Wednesday morning, the teams had to deal with some windy conditions during the practice rounds and the college-am on Thursday but the forecast for the weekend is for sunny and hopefully less windy conditions.

LSU is hoping early is best for them as they will go off in the opening wave on Friday off the first tee with Tulane and Kentucky. Kentucky is coached by former LSU assistant Golda Borst, who is in her first year as the head coach at UK. Tulane has a couple of top three finishes this season as a team under Coach John Thomas Horton.

LSU will have its two tournament winners in the lineup in senior Megan McChrystal (69.9 stroke average) and freshman Austin Ernst (73.1 average) along with juniors Tessa Teachman (73.9) and Jacqueline Hedwall (74.2) and sophomore Mary Michael Maggio (73.6).

Tulane is led by senior Janine Fellow with two top 10 finishes and a stroke average of 72.22 while sophomore Maribel Lopez Porras averages 73.33. Rounding out the Wave lineup will be Ashley McKenney (74.78), Meghan Chapman and Stephanie Wagstaff.

Players in the field have won a total of 12 individual titles and the field is led by Golfstat Cup’s No. 1 performer, McChrystal of LSU. She is joined in the field by No. 3 Lindy Duncan of Duke, No. 6 Brittany Altomare of Virginia, No. 8 Brooke Pancake of Alabama and No. 9 Sara-Maude Juneau of Louisville.

The round begins with individual competitors at 7:51 followed by teams going one the first and 10th tee starting at 8 a.m. both Friday and Saturday. The final round is a shotgun start at 8:30 a.m.