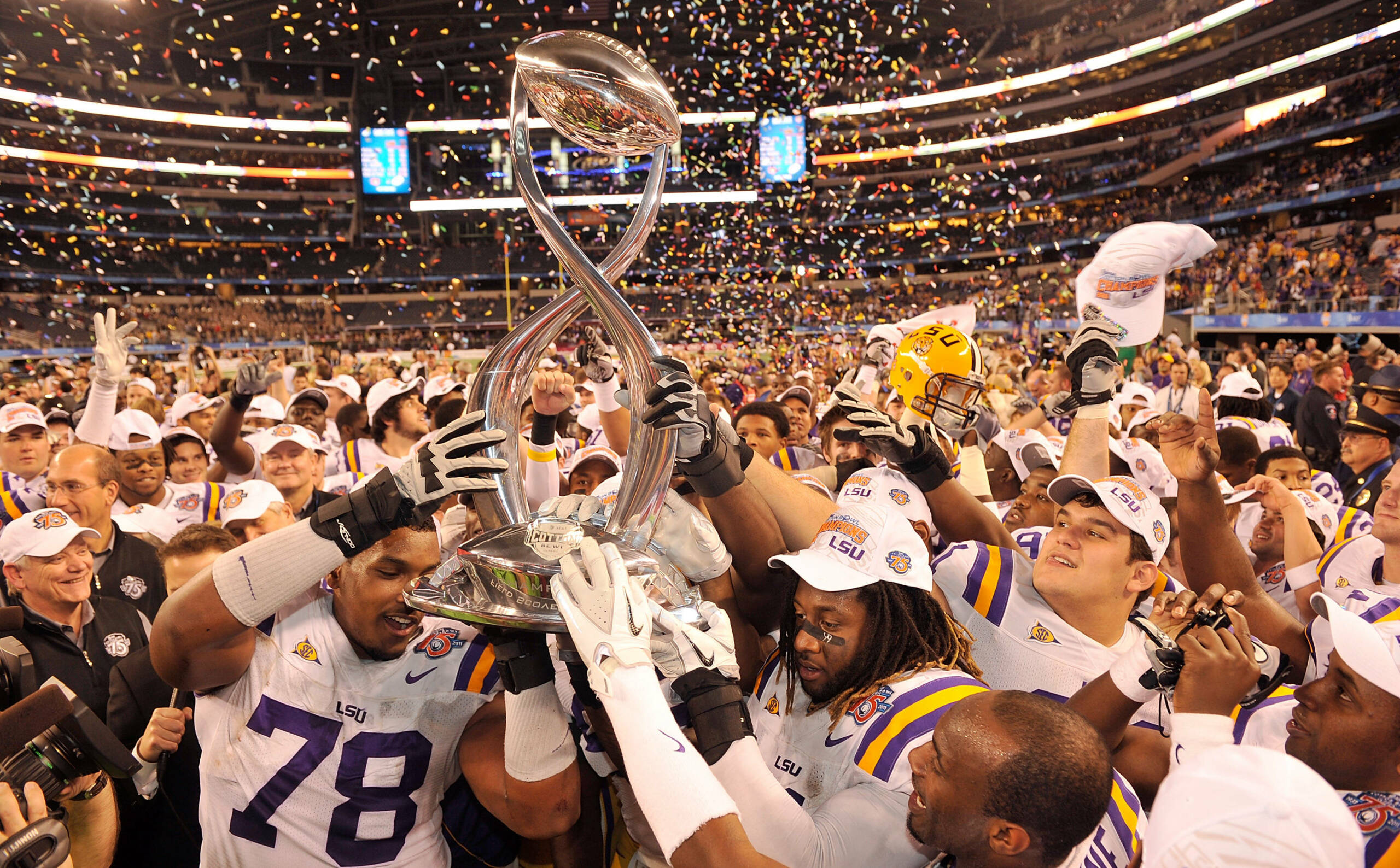 ARLINGTON, Texas — As upperclassmen from the “Old War Skule” played their final game in purple and gold, they handed the baton to the next generation of Tigers — and LSU won big.

It may have been the end of the 2010 season, but the future never looked so bright as the Tigers earned a measure of respect with a 41-24 victory over No. 18 Texas A&M in Cowboys Stadium after a disappointing end to the regular season.

LSU will return to this beautiful venue to open the 2011 season on Sept. 3 against BCS national championship game participant Oregon without some of its finest leaders — Kelvin Sheppard, Drake Nevis, Josh Jasper, Joseph Barksdale and Terrence Toliver. But, tonight, Tiger fans saw a coming out party for some of the new blood on national television.

Toliver tied LSU’s bowl and a Cotton Bowl record with three receiving touchdowns, as the 11th-ranked LSU football team overcame a 10-0 first-quarter deficit to hammer the Aggies under the Friday night lights.

The Hempstead, Texas, native who grew up 45 miles from College Station was named the Most Outstanding Offensive Player after catching five passes for 112 yards. His three scores of 42, 2 and 41 yards tied Wendell Davis’ school record in the 1987 Gator Bowl and Keyshawn Johnson’s Cotton Bowl record set in 1995 for USC against Texas Tech.

With the likes of Sheppard, Nevis and Patrick Peterson on one of the nation’s best defenses, it was true freshman cornerback Tyrann Mathieu who earned the Most Outstanding Defensive Player award after collecting an interception, a fumble, seven tackles including a sack.

While running back Stevan Ridley again blazed the trail for the Tigers with 105 yards on 24 carries with a touchdown, freshman Spencer Ware was right behind with 10 carries for 102 yards.

Jasper overcame an early 44-yard missed field goal to make from 50 and 26 yards to cap the greatest season in the history of LSU placekickers. He made a school-record 28-of-34 attempts in his senior season.

LSU (11-2) won its 11th game for the sixth time in school history including four times under head coach Les Miles. The Tigers improved to 23-19-1 in bowl games all-time, as they played in a school-record 11th-straight postseason game.

LSU quarterback Jordan Jefferson had one of his more complete games, completing 10-of-19 passes for 158 yards with three touchdowns and an interception. He also ran for 67 yards on 12 carries with a touchdown.

LSU fell behind 10-0 less than 10 minutes into the game, but didn’t lose it composure on either side of the ball. The Tigers scored four touchdowns in the final 17 minutes of the first half and never looked back.

Sheppard, a senior, led LSU with eight tackles while the Tigers defense forced four turnovers — all by freshmen — including three interceptions. Freshmen defensive backs Mathieu and Eric Reid each had interceptions and followed Sheppard with seven tackles each. Freshman Tharold Simon also had a pick of Texas A&M quarterback Ryan Tannehill.

Tannehill finished 23-of-36 passing for 218 yards with two touchdowns and three interceptions.

LSU won the coin toss and deferred its decision until the second half, electing to kickoff to Texas A&M to open the game.

Jasper’s kickoff to the goal line was returned 69 yards by Judie Coryell to the LSU 31 where Mathieu chased him down to save a touchdown. The Aggies took advantage of the long return by putting the first points on the board first on a 6-yard strike from Tannehill to Nwachukwu.

On LSU’s first possession, the Tigers looked to go three-and-out when punter Derek Helton was roughed to provide a fresh set of downs at the LSU 39. Jefferson completed a 9-yard pass to wide receiver Rueben Randle and then ran seven yards to the Aggies 45. Ware picked up another first down with an 11-yard run to the 27, but a negative run by Jefferson put the Tigers in an obvious passing down. Jefferson’s third-down pass toward Randle was intercepted by Judie at the 6. Judie was tackled attempting to come out of the endzone at the A&M 2.

Gray ran Texas A&M off their goalline with consecutive 5-yard runs before Tannehill broke LSU’s containment for a 32-yard run to the 44. Gray earned another first down with an 18-yard run to the LSU 29 when the drive stalled on two incomplete passes. Randy Bullock converted a 39-yard field goal and Texas A&M led 10-0 with 5:03 left in the quarter.

Jefferson and the Tigers running backs moved the ball across midfield to the Aggies 42 when Jefferson uncorked a touchdown pass to Toliver in the middle of the endzone. Toliver’s third touchdown of the season was also his longest catch, as LSU cut the deficit to 10-7 with 1:48 left in the quarter.

The offensive success helped LSU’s defense catch its breath. Though Texas A&M entered LSU territory with passes of 11 and 16 yards by Tannehill, LSU’s Tyrann Mathieu came off the corner and hit the quarterback and jarred the ball loose. An offensive lineman recovered, but the 11-yard loss forced a 52-yard field goal attempt by Bullock that hit the right upright on the second play of the second quarter.

LSU ran on 8-of-9 plays in its next scoring drive, as Ware broke off a 24 yard run while Ridley and Jefferson combined for the other 41 yards of the drive. A bootleg run by Jefferson from the 1-yard line was his seventh rushing touchdown of the season and put LSU ahead 14-10 with 10:13 left in the half.

Texas A&M answered with a touchdown drive of its own to regain the lead, moving 78 yards in seven plays and capping the drive with a 14-yard halfback pass from Gray to Nwachukwu. The Aggies led 17-14 with 7:44 left in the half.

Five more runs and a 14-yard reception by Toliver put LSU back in the Aggies endzone on the ensuing drive. Ridley gave LSU the lead once more with a 17-yard run around the right end. His 15th rushing touchdown LSU led 21-17 with 4:43 before halftime.

Simon and Reid each intercepted Tannehill in the next four minutes, with the latter returning 34 yards to the Aggies 2-yard line.

Three plays later, LSU converted the turnover into a 2-yard touchdown pass from Jefferson to Toliver and padded its lead going into the lockerroom. The Tigers led 28-17 at halftime.

A 32-yard kickoff return by Peterson put LSU’s offense in good position to start the second half. Jefferson overcame a 10-yard sack with a 32-yard run on third-and-19 from the LSU 24. Two plays later, Jefferson connected with Toliver for his third touchdown of the game. The 41-yard bomb pushed the LSU lead to 35-17 with 12:06 left in the third quarter.

The next two time-consuming drives ended in a Texas A&M punt from the LSU 37 and a missed 44-yard field goal by Jasper that ended the third quarter.

On the first drive of the fourth quarter, Texas A&M punted on fourth-and-12 from the LSU 42 but received a new set of downs when LSU was called for 12 players on the field. Seven plays later, Tannehill lobbed a perfect pass to Kendric McNeal for a 4-yard touchdown on third-and-goal. The Aggies pulled within 11, 35-24, with 10:04 left to play.

An onside kick by Texas A&M sailed out of bounds at the LSU 48. The Tigers were able to turn the short field into a 50-yard field goal by Jasper with 6:12 to play. The field goal tied the longest in Cotton Bowl history.

For the third time, Tannehill was picked off by an LSU freshman as Mathieu stepped in front of a receiver at the Texas A&M 28 yard line with less than five minutes to play.

Again, LSU used the right leg of Jasper to add a 26-yard field goal and ice the victory.