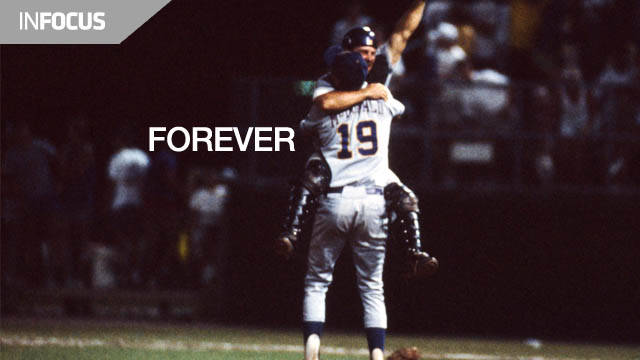 In the bottom of the 10th inning of an elimination game during the 1987 College World Series, LSU led Stanford, 5-2, with two outs and the bases loaded as LSU freshman right-hander Ben McDonald faced Stanford freshman infielder Paul Carey.

Every kid playing baseball imagines themselves in Carey’s situation- at bat with two outs, the bases loaded and the big game on the line. On June 5, 1987, Carey’s dream was realized as he launched a walk-off grand slam to eliminate LSU and advance to an eventual College World Series championship.

Kids typically imagine themselves as Carey and rejoice in celebration and victory in their backyard fantasies. They never picture themselves as McDonald and probably wouldn’t know the proper way to respond to such adversity.

“Giving up that grand slam in the College World Series,” McDonald recalled, “that was a turning point for me.

“I remember Coach (Skip) Bertman and my mom and dad telling me, ‘Do not let this moment define you. There are two things you can do: either bump it out and work harder and pursue your goals and dreams, or you can let this affect you the rest of your sports career, and it’s going to keep you down,'” McDonald said.

“I remember telling myself that it was time for me to work even harder. That adversity motivated me even more to do better. It was a lot to swallow, but it made me tough. It made me realize I could overcome adversity and move on.”

The process of turning that adversity into the illustrious career McDonald enjoyed began two weeks after giving up that grand slam when the 6-7 right-hander from Denham Springs, La., ventured to Anchorage to compete in the Alaska Summer League.

Before McDonald’s first start that summer, the opposing manager tried to get into his head by sending over a fake lineup card with the name “Paul Carey” written in at every position. McDonald responded with a merciless one-hit shutout.

“Big Ben,” as he was referred to by fans and teammates, was born. During his sophomore season in 1988, McDonald compiled a 13-7 record, including 10 complete games with a 2.65 ERA and 144 strikeouts. All the while, a picture of McDonald’s dejected look following Carey’s grand slam hung above his locker reminding him that we wasn’t finished working.

After a stellar sophomore season, McDonald was invited to play on the 1988 U.S. Olympic team and led the United States to a gold medal in Seoul, South Korea with two complete game wins and a 1.00 ERA. McDonald called his Olympic experience sort of an affirmation of his potential to become a special player.

“You always question your ability and how good you are,” McDonald explained. “I was one of the few underclassmen on the 1988 Olympic team. For a whole summer I got to measure my talents against some of the best amateur players in the world. I knew could compete. That led me into my junior year with a lot of confidence.”

McDonald’s junior season at LSU was nothing short of spectacular. The right-hander amassed a 14-4 record with a 3.49 ERA and set SEC records with 202 strikeouts, 152.1 innings pitched and 44.2 consecutive scoreless innings pitched. For his accomplishments, McDonald received several National Player of the Year commendations, as well as the prestigious Golden Spikes Award, given by the United States Baseball Federation to the nation’s most outstanding amateur player.

The two-time All-American was chosen as the No.1 overall selection in the 1989 MLB Draft by the Baltimore Orioles and went on to enjoy a 10-year career with Baltimore and Milwaukee.

McDonald’s legacy at LSU is marked by a 29-14 record, a 3.49 lifetime ERA and 373 career strikeouts, which is second on LSU’s all-time career list. He also still holds the SEC record for most strikeouts in a single season (202).

Above the outstanding statistics and amazing accolades, McDonald said he wants his legacy to be remembered in much broader terms.

“I take a lot of pride in helping build the program at LSU,” McDonald said. “Coach Bertman used to always tell us that, ‘you had to be there before you could win it, and you have to believe you belong.’ I think we were the guys that got there first and helped other players believe they belonged there and consequently six national championships have followed.

“I take a lot of pride in the fact that we helped get some things started at LSU.”

On Saturday, McDonald’s legacy will be honored as his jersey No. 19 will be formally retired in and permanently displayed on the grandstand fascia of Alex Box Stadium.

“It’s a very emotional time. It’s been so long for me it almost feels like somebody else did it,” McDonald said. “It’s means a lot to me now, but I’m sure it will mean even more as the years go by. It’s a really great honor and means so much to me and my family.”

When asked what advice he would give to a young player, McDonald spoke from experience in saying, “You have to make the most of every opportunity that you have. Don’t ever leave anything out there; work as hard as you can in everything you do.”