LSU to Retire Augustus' No. 33 Jersey 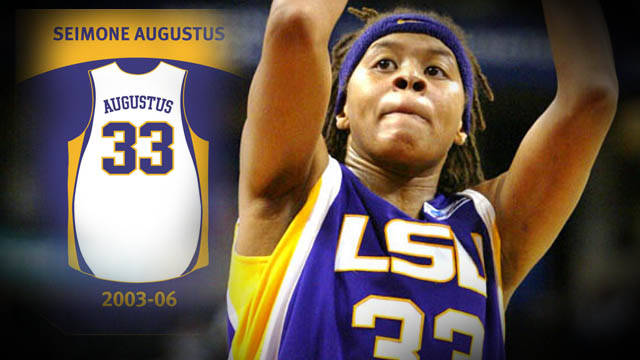 “It is a honor to be able to be the first female basketball player to have her jersey retired,”Augustus said. “It is humbling to know that my jersey will forever hang in the rafters with players like Bob Pettit, Shaq and Pete Maravich. It is even more special that I’m a home grown product right from Baton Rouge. It gives my family, friends and loyal supporters something to be proud of and remember forever. I’m glad to be a part of LSU history as well be as be a part of the LSU family. Thank you for all the love and support.”

Augustus joins an elite group of LSU legends whose jerseys have been retired in the 117-year history of LSU Athletics. Only eight other individuals in LSU history have had their jerseys retired, including Pete Maravich, Bob Pettit, Rudy Macklin and Shaquille O’Neal in men’s basketball, Billy Cannon and Tommy Casanova in football and Skip Bertman and Ben McDonald in baseball.

Augustus’ senior season was 2006, but the LSU Athletic Council unanimously waived the five-year waiting period a student-athlete must normally have to be nominated after completing intercollegiate competition.

“This is an honor of the highest measure and one which Seimone Augustus truly deserves,” said Alleva. “Seimone distinguished herself during her college career as one of the greatest student-athletes in the country and she continues to be a tremendous representative of LSU.  This is a particularly significant honor because she is the first female student-athlete in LSU history to have her jersey retired.”

Augustus’ jersey will be officially unveiled from the rafters of the Maravich Center prior to LSU’s game against rival Tennessee on Sunday, Jan. 24 at 5 p.m. CST. The contest will be televised live by ESPNU.

Augustus’ career at LSU was unrivaled by any player in LSU women’s basketball history. In each of her four years, the Baton Rouge native received All-America honors. She was the only player in school history to earn State Farm Coaches Association All-America honors three times, doing so in 2004, 2005 and 2006. Prior to her arrival, LSU had never produced a National Player of the Year, but Augustus earned the honor twice.

Her junior season was one of the best in school history. Augustus won the State Farm Wade Trophy, the Naismith Award and the John R. Wooden Award as the nation’s top player, a first for any Lady Tiger. She became the 23rd player in school history to reach 1,000 career points and the eighth to accomplish the feat in two seasons or less. She also was the 10th player at LSU to reach 1,500 career points.

As a senior, Augustus followed up 2005 with yet another National Player of the Year honor. She earned the Wade Trophy, Naismith Award and John Wooden Award again, and she was recognized as the Associated Press National Player of the Year in 2006. She closed her career as a starter in 140 games, a school record at LSU. She also led the nation in points per game with 22.7.

Augustus ended her career with 2,702 points — second most in school history – and she became just the fourth player and first since 1995 to reach the 2,000-point plateau. She rewrote the record books at LSU as she scored in double figures in a school-record 97 straight games. Augustus reached double digits in 132 of 140 career games, the most in NCAA history.

Even more impressive than her statistics and awards is what Augustus did to the game of basketball. She completely changed the culture of women’s basketball at LSU. Prior to her arrival, the Lady Tigers had never advanced to a Final Four.

They finally did so her sophomore season, starting a streak of five straight Final Four appearances as she was the catalyst of three of them. LSU shattered attendance numbers, including a school-record 15,233 fans who witnessed the Lady Tigers defeat Tennessee during Augustus’ junior season.

A 2006 graduate of LSU, Augustus was the WNBA’s No. 1 draft pick in 2006 by the Minnesota Lynx where she has since become a two-time WNBA All-Star. In 2008, she and former All-American Sylvia Fowles became the first former women’s basketball players to be named to a United States Olympic team. The two won Olympic gold in Beijing in 2008.

To have a jersey retired at LSU, an athlete must have completed intercollegiate competition for LSU a minimum of five years prior to nomination.  Athletes must have demonstrated truly unusual and outstanding accomplishments, exceeding and in addition to all criteria used for Hall of Fame selection.  The athletic performance must be considered unique, such as winning of a Heisman Trophy or National Player of the Year award, and should be based on the total LSU career. Athletes may also be considered for making dramatic impact on the popularity of his or her sport or for significant participation in positive change in LSU Athletics.   Nominees must have a unanimous vote of support from the Hall of Fame committee.

The retirement of the jerseys of Augustus, Casanova, McDonald and Macklin comes under a recent provision of the LSU jersey retirement bylaws that says the retirement of an athlete’s jersey in a particular sport does not preclude a current student-athlete in that sport from wearing the jersey number in that or any other sport, subject to the discretion of the head coach.  This provision applies only to jerseys retired after January 1, 2007, so the numbers worn by Maravich, Pettit, O’Neal, Cannon and Bertman may never again be worn by future student-athletes in their respective sports.