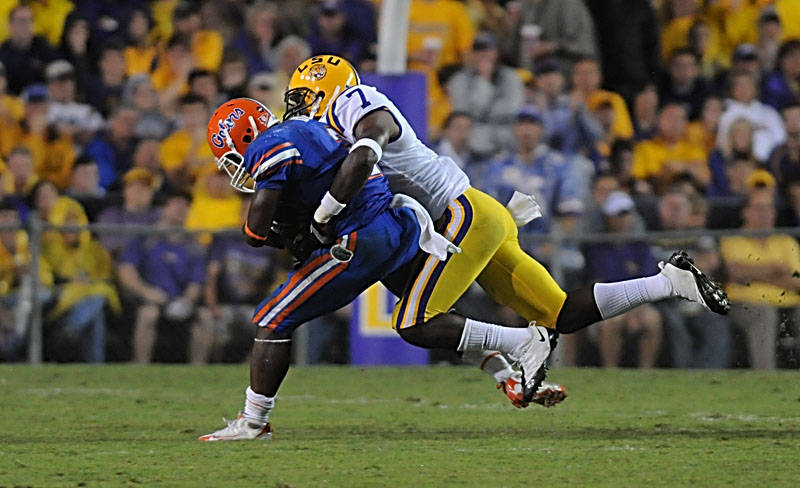 BATON ROUGE — LSU cornerback Patrick Peterson has been tabbed as a second-team All-America by Sporting News, the publication announced.

In his first full season as a starter for the Tigers, Peterson was also named first-team All-Southeastern Conference by ESPN.com as well as being a second-team pick by both the Associated Press and the SEC Coaches.

Peterson, a sophomore from Pompano Beach, Fla., finished the 2009 regular season with 47 tackles and he ranked third in the SEC in passes defended with 15. He broke up 13 passes and added a pair of interceptions, one of which he returned 37-yards for a first quarter touchdown against Mississippi State.

Peterson added another touchdown later in the season when he scooped up a blocked field goal and raced 53-yards for a score against Ole Miss. Peterson opened the year with a career-best nine tackles to go with a fumble recovery and a pair of pass breakups in the 31-23 win over Washington. Peterson had a season-high three pass breakups against Alabama.

Peterson started all 12 games at cornerback for the Tigers, drawing the assignment of covering the opponent’s top wide receiver each week. In LSU’s 20-13 win over Georgia, Peterson limited standout Bulldog receiver A.J. Green to just four catches, while he held Alabama’s Julio Jones to only three receptions.

Peterson played a key role for an LSU defense that rated third in the SEC and No. 12 in the nation in scoring, allowing just 16 points per game. The Tigers also ranked No. 18 in the nation in pass defense efficiency with a 108.0 rating.