by Will Stafford (@WillStaffordLSU)
Tournament Homepage +0 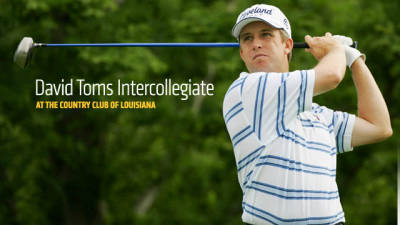 BATON ROUGE ? College golf is set to make its return to Baton Rouge this week for the first time in nearly five years when the LSU men’s golf team plays host to the inaugural David Toms Intercollegiate at The Country Club of Louisiana beginning Monday at the par-71, 6,849-yard layout.

LSU welcomes 13 teams from across the country to Baton Rouge this week as the field will play 36 holes Monday with a shotgun start at 8 a.m. CT followed by a final 18 holes Tuesday.

“We’re looking forward to having a home tournament once again,” said LSU head coach Chuck Winstead. “I know there are a lot of LSU golf fans that have wanted to watch our guys play, and to a man, they are excited to play at home. We’re all looking forward to a great event.”

The Tigers will compete as part of a 14-team field that includes six teams ranked in the top 50 in the latest Golfweek/Sagarin Performance Index, including No. 27 Northwestern, No. 28 North Florida, No. 35 Kent State, No. 37 LSU, No. 44 Auburn and No. 49 Southeastern Louisiana. LSU also welcomes Louisiana-Lafayette, Louisiana Tech, Mississippi State, Ole Miss, Pepperdine, Rice, South Alabama and UAB.

“We look forward to hosting a solid field in this inaugural event,” Winstead said. “We’re fortunate to have teams join us from all parts of the country, along with some familiar conference rivals and programs from right here in the state of Louisiana. It is sure to be a competitive event for 54 holes.”

The inaugural David Toms Intercollegiate at the Country Club of Louisiana marks the final tournament of the fall season for the Tigers as they have competed in three tournaments over the past four weeks.

Three Tigers are slated to make their fourth appearance in the five-man starting lineup this fall as juniors Andrew Loupe and John Peterson join sophomore Sang Yi in leading the LSU squad. Junior Clayton Rotz and sophomore Josh Jones have each earned their third start this season. In addition, seniors Brent Blaum and Brian Leveille will compete as individuals alongside sophomore Austin Gutgsell.

“We have a talented group of guys, and many are close to playing some very good golf,” Winstead said. “John and Andrew have led the way for our team thus far this season, but I’ve seen growth from some of the other guys on our team. Clayton Rotz is as talented as they come and is really starting to play well.”

The David Toms Intercollegiate at the Country Club of Louisiana bears the name of a true LSU great and the most decorated golfer to ever wear the purple and gold.

Toms earned three All-America honors during a brilliant career at LSU from 1986-89, including a pair of first-team selections in 1988 and 1989. He was also a three-time First-Team All-SEC performer, and was honored as the program’s only two-time SEC Player of the Year in 1988 and 1989. He guided LSU to two SEC championships during his career while winning the SEC individual title as a sophomore in 1987.

Toms has gone on to a successful professional career as a star on the PGA Tour. He has won a total of 12 PGA Tour events during a remarkable 18-year career, including his first career major championship at the 2001 PGA Championship, while earning more than $30 million in competition.

“David and I have had conversations for several years now in working through the process of getting this event started,” Winstead said. “I’m thankful to David, as well as the membership at The Country Club of Louisiana for affording us this opportunity to compete right here in Baton Rouge. It’ll truly be one of the really special events in all of college golf. That is our vision.”

The Tigers are paired with North Florida and Northwestern during Monday’s competition. Live scoring of the event can be accessed on LSUsports.net courtesy of Golfstat.