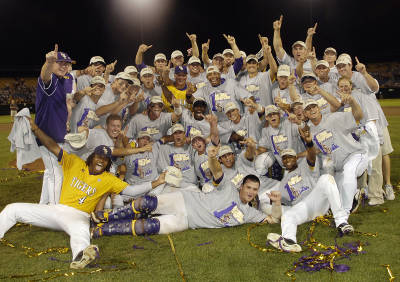 The Tigers (56-17) won their sixth national championship in school history, the first since 2000 and the first under head coach Paul Mainieri. The Tigers are now 6-0 in winner-take-all NCAA championship games.

“I’ve dreamt my whole life of having this moment. It’s almost surreal,” Mainieri said. “My first thoughts are with this wonderful university and with this state and its tenacious people. This championship is for them.

“We’ve had a wonderful group of kids. They’ve done everything you’ve asked them to do. They did everything they needed to do to be called champions.”

The winning pitcher was sophomore right-hander Anthony Ranaudo (12-3), who threw 5.1 innings and allowed four runs on eight hits with five walks and eight strikeouts. Ranaudo was named to the All-Tournament team along with second baseman DJ LeMahieu and outfielders Ryan Schimpf and Jared Mitchell.

Mitchell was also named Most Outstanding Player of the College World Series, after hitting .347 (8-for-23) with two homers, seven RBI, two doubles and a triple.

Leading LSU offensively in Game 3 was first baseman Sean Ochinko, who went 4-for-5 with a homer, three RBI and two runs.

Longhorn starter Cole Green retired LeMahieu and Schimpf to begin the game before hitting Blake Dean and giving up a single to Ochinko.

The next batter, Mitchell, lined a two-strike pitch just within the foul pole in right to give the Tigers a 3-0 lead. The homer was Mitchell’s 11th of the season and second of the College World Series.

In the bottom of the first, Texas strung together a couple of hits and catcher Cameron Rupp loaded the bases on a two-out walk. Ranaudo struck out the next batter, Kevin Keyes to end the Longhorn threat in the first and preserve LSU’s 3-0 lead.

Catcher Micah Gibbs led off the LSU second inning with a single and later scored on a two-out RBI single by Schimpf to increase the Tigers’ lead to 4-0.

Green left the game for Texas after only throwing two innings and allowing four runs on five hits. Sophomore right-hander Brandon Workman entered the game for the Longhorns to start the third and allowed no runs in the inning, despite giving up a lead-off single to Ochinko.

Texas got on the board in the third when second baseman Travis Tucker led off with a double and later scored on an infield groundout by Rupp to make the score 4-1.

The Longhorns made the score 4-2 after Ranaudo walked Preston Clark with the bases loaded. It was the third-straight walk in the inning by Ranaudo. Shortstop Brandon Loy grounded out to Austin Nola to end the Texas threat in the third.

Texas tied the score in the fifth when Keyes smashed a two-run homer following a lead-off single by Rupp. Keyes’ ninth homer of the season tied the score at 4-4.

The Tigers responded in the sixth when Mitchell drew a lead-off walk and scored on an RBI double by centerfielder Mikie Mahtook to put the Tigers back on top 5-4.

Right-hander Austin Dicharry came into pitch for Texas after Mahtook’s double. The next batter, Gibbs, reached first on a sacrifice bunt and throwing error while Mahtook advanced to third.

Derek Helenihi then lifted a deep sacrifice fly to left, scoring Mahtook and giving the Tigers a 6-4 lead.

After Gibbs advanced to third on a wild pitch and Dicharry walked LeMahieu, Texas brought in left-hander Austin Wood. Wood hit Schimpf to load the bases for Dean with two outs.

After three straight balls, Dean was hit by a pitch, allowing Gibbs to score from third. The bases remained loaded for LSU with a 7-4 lead.

Ochinko then laced his third hit of the game through the left side, scoring LeMahieu and Schimpf to increase the Tigers’ lead to 9-4.

Ranaudo left the game in the bottom of the sixth after retiring Tucker on a fly out to center, giving way to left-hander Chad Jones. Jones struck out the next two batters to end the sixth inning.

The Tigers made the score 10-4 in the eighth after Austin Nola doubled to lead off the inning and later scored on a sacrifice fly by Schimpf.

Louis Coleman entered the game in the bottom of the eighth after pitching six innings in Monday’s 7-6 win over Texas in Game 1. Coleman allowed one hit in the eighth and struck out one.

Ochinko blasted a solo homer to left in the top of the ninth to give the Tigers an 11-4 lead. It was Ochinko’s fourth hit of the game and his seventh RBI of the College World Series.

Coleman made his final appearance in a Tiger uniform in the ninth inning, as he struck out the side to end the game and start an LSU celebration on the pitcher’s mound.

“If there is a better way (to end this season), write the story for me,” Mitchell said. “It’s been so hmuch fun … to accomplish something like this with these players.”