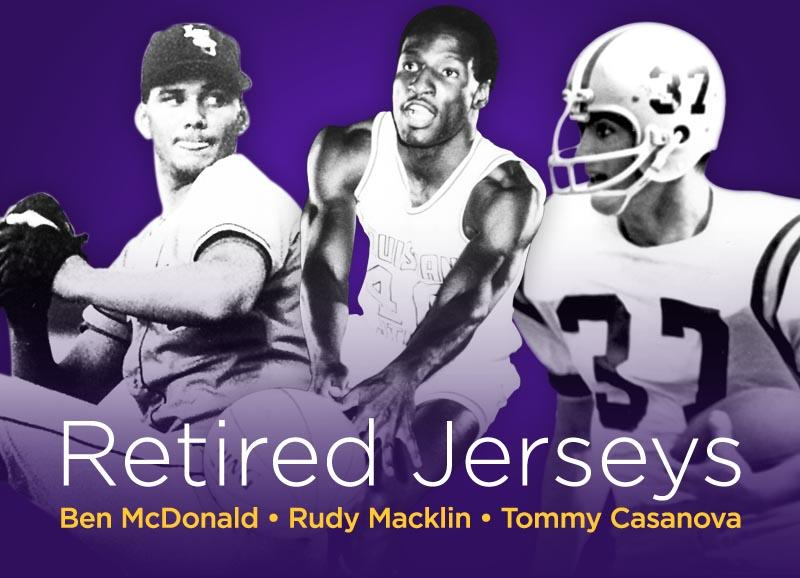 The three LSU sports legends join an elite group of former athletes and coaches whose jerseys have been retired in the 116-year history of LSU Athletics.  Only five other individuals in LSU history have had their jerseys retired, including Pete Maravich, Bob Pettit and Shaquille O’Neal in basketball, Billy Cannon in football and Skip Bertman in baseball.

The jerseys of Casanova, McDonald and Macklin were retired as a result of a unanimous vote of the LSU Athletic Hall of Fame Selection Committee on Friday. They will each be honored at future LSU sporting events on dates to be announced.

“This is one of the highest honors that can be bestowed on a former LSU athlete and these individuals are truly deserving of this recognition,” said Alleva.  “Tommy Casanova, Ben McDonald and Rudy Macklin distinguished themselves during their LSU athletic careers and continue to represent LSU with pride and dignity.  This is a very significant honor in LSU athletics history.”

Tommy Casanova is the only three-time All-American in the history of LSU football and is a member of the College Football Hall of Fame.  During his Tiger career from 1969-71, Casanova personified versatility for his myriad of talents as he played offense, defense, returned punts and kickoffs.  In addition to his contributions as a premier defensive back, in his sophomore and junior seasons he also played halfback on offense, carrying the ball 72 times in 21 games, and averaging 4.2 yards a try. He returned punts and kickoffs 28 times as a freshman, 26 times his sophomore season, and seven times as a senior, averaging 14 yards a return. In a 61-17 LSU victory over Ole Miss in 1970, Casanova ran back punts 61 and 73 yards for touchdowns.

Casanova, who played under legendary LSU head coach Charles McClendon, is one of just two three-time All-SEC performers from LSU.  He played six seasons with the Cincinnati Bengals of the NFL while earning his medical degree.  He is now an ophthalmologist in Crowley, La.

Ben McDonald won the prestigious Golden Spikes Award, given annually to the nation’s most outstanding player, in 1989 and is a member of the College Baseball Hall of Fame.  He led LSU to two College World Series appearances under head coach Skip Bertman and helped set the stage for LSU’s string of national titles in the 1990s.  McDonald also lettered as an LSU basketball player as a member of the 1986-87 Tiger hoops squad that advanced to the Elite Eight of the NCAA Tournament.

In 1989, McDonald was also named National Player of the Year by Baseball America, The Sporting News and Collegiate Baseball as he went 14-4 with an ERA of 3.49 and an SEC record 202 strikeouts.  McDonald, who set an LSU career record with 373 strikeouts during a three-year career from 1987-89, set SEC records for single-season strikeouts, innings pitched and consecutive scoreless innings. A two-time All-American, he led the US Team to a Gold Medal in the 1988 Olympic Games at Seoul, Korea with two victories.  He was selected by the Baltimore Orioles as the No. 1 pick in the major league draft in 1989 and went on to enjoy a 10-year major league career with the Orioles and the Milwaukee Brewers.

Rudy Macklin was a two-time basketball All-American selection during his Tiger career from 1976-81 during which time he became LSU’s all-time leading rebounder with 1,276 boards and the second-leading scorer in school history behind only the legendary Pete Maravich with 2,080 points.

Macklin’s arrival at LSU began a new era of Tiger Basketball as he shunned the basketball powers in his home state of Kentucky to join Dale Brown‘s program in Baton Rouge. He led the Tigers to two Elite Eight appearances and the 1981 Final Four in Philadelphia.  He still holds the school single game rebound record with 32, a mark like some of the great records in any sport that may never be broken.  He was drafted by the Atlanta Hawks in the 1981 NBA draft and played several seasons for the Hawks and the New York Knicks.

To have a jersey retired at LSU, an athlete must have completed intercollegiate competition for LSU a minimum of five years prior to nomination.  Athletes must have demonstrated truly unusual and outstanding accomplishments, exceeding and in addition to all criteria used for Hall of Fame selection.  The athletic performance must be considered unique, such as winning of a Heisman Trophy or National Player of the Year award, and should be based on the total LSU career. Athletes may also be considered for making dramatic impact on the popularity of his or her sport or for significant participation in positive change in LSU Athletics.   Nominees must have a unanimous vote of support from the Hall of Fame committee.

The retirement of the jerseys of Casanova, McDonald and Macklin comes under a new provision of the LSU jersey retirement bylaws that says the retirement of an athlete’s jersey in a particular sport does not preclude a current student-athlete in that sport from wearing the jersey number in that or any other sport, subject to the discretion of the head coach.  This provision applies only to jerseys retired after January 1, 2007, so the numbers worn by Maravich, Pettit, O’Neal, Cannon and Bertman may never again be worn by future student-athletes in their respective sports.