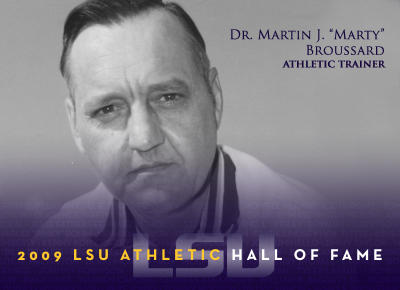 Editor’s Note: This is the first in a series of six stories profiling the members of the 2009 class of the LSU Athletic Hall of Fame.

LSU Athletics has produced numerous legends through its history. One legend stands in a class all his own and is known as one of the most important figures in LSU history.

Dr. Martin J. “Doc” Broussard – a tall and strong-willed man, was a purple and gold fixture to student-athletes, coaches and athletics directors.

“He was tremendously respected by everyone at LSU and also the community,” said former LSU Athletic Director Joe Dean. “Most of the athletes thought he knew more than the doctors did- and he probably did.”

Broussard was recognized as one of the most experienced men in the world of athletic trainers during his tenure in Baton Rouge. His career at LSU stretched over five decades and progressed from student-athlete to trainer to professional status during his tenure.

Long before Broussard oversaw the health of LSU’s athletics, few knew that he himself was once quite an athlete. He came to LSU on an athletic scholarship. Broussard pitched for LSU’s baseball team in 1939, 1940, 1943 and 1944 and for the Birmingham Barons of the Southern Association in 1946. He ran the 220-yard dash and was a broad jumper for the LSU track and field team. He was also the highest scorer in the Southeastern Conference meet of 1944 with 15 points.

While starring as a student-athlete, Broussard was also working as a student trainer for the football team. His goal was to someday become a medical doctor, but due to financial restraints he was unable to follow his dream.  As a result, his medical interest drifted in another direction.

“He always wanted to be a doctor. He ran a very tight medical facility, you didn’t walk in and say you had something wrong with you,” said Dean. “You went like he told you, you dressed well and you sat at his desk just like you were in a doctor’s office.”

After receiving his degree, he served single seasons at Florida and Texas A&M before returning to his proud Tiger alma mater where he has a been a icon ever since.

Rewards and recognition came fast for Broussard when he arrived in Tiger town in 1948 after he was appointed head athletic trainer and never left.

The Tigers trainer’s technique of healing athletes’ injuries was second to none in the nation, and he played a major role in the development of LSU’s 1949 Cinderella football team and the 1958 national champions.

Broussard has twice been honored nationally for his skill and experience as an athletic trainer. He was selected as a trainer for the 1955 Pan American Games, for the U.S. Olympic team in 1960, and was named “Trainer of the Year” by the Rockne Foundation in 1960.

“He was truly a doctor but he was always frustrated that he could not become a medical doctor and go to medical school. You could eat off the floor in his training room. He wore a white coat and his student workers were always professionally dressed.” explained Dean.

Broussard, who was a U.S. Army medic in World War II, ran his training room like a military operations unit.

“He was stern and most athletes feared him,” said Dean, who was close with Broussard. “I arrived at LSU as a basketball player in 1949. Doc didn’t give you a chance if you were a freshman, sophomore or junior, but once you were a senior he formed a friendship with you; that was my case and we became very good friends.

Most athletes were reluctant to go to Broussard with minor injuries.

“You should almost be in a body bag before you saw the Doc, you couldn’t just go to him with minor injuries, ankle taping or a broken finger. Nope he wouldn’t accept that from any athlete,” said Dean.

Broussard had no other choice than to put fear into student-athletes. He served year-round as a doctor, psychologist, dietitian and foster father to athletes. He needed to gain their respect before a friendship in order to fully heal their body, their mind and their spirit.

“He was probably the most brutally honest person you will ever meet but inside that tough exterior there was gentleness,” said former LSU basketball coach Dale Brown.  “He said exactly what he felt even though you didn’t agree with it. He spoke from his heart and had a tremendous passion and love for LSU.”

Brown said when former LSU athletes returned to their alma mater, they made sure to see “Doc” first.  Broussard was such an important figure in athletics and to athletes that in 1998 LSU’s multi-million dollar athletic training facility was named in honor of the “Doc” himself.

Broussard was extremely proud of his Cajun heritage, and the Abbeville, native lived for the purple and gold tradition every morning till the late hours of the nights healing the bodies of LSU greats like Bob Pettit, Billy Cannon, Pete Maravich and Shaquille O’Neal.

But, as stubborn and serious as he looked Broussard had a great sense of humor and often was unafraid to act foolish when the time was appropriate. Coach Brown’s memory of his longtime friend stretches through the years but one fond moment is one that always sticks out to the LSU Hall of Fame coach.

“I can remember we were traveling for the weekend,” recalls Brown. “We landed at the airport and one of my athletes had a Cadillac-size boom box that he was carrying on his shoulders. I told Doc I would pay him 100 dollars to walk around the airport with the boom box on his shoulders,” chuckles Brown.

Broussard took the offer from Brown. He put the boom box on his shoulders and turned the sound up while he danced around the team and bystanders.

“He had us in hysterics. We watched that 70-year-old man move like one of my players,” smiled Brown.

Along with Broussard’s senses of loyalty and humor, Brown also appreciated “Doc’s” respect for LSU’s traditions.

“He had a very strong commitment to LSU, he put LSU before everything,” explained Brown.  “LSU was his number one pride and joy. He gave everything he possibly could to LSU and to his athletes.”

Broussard’s professional tenure ended at LSU with a semi-retirement in 1993. But his time at LSU wasn’t over yet. His heart was still very much involved with the Tigers. He served as LSU Athletic Director’s Joe Dean’s special assistant through 2001, completing 60 years of healing to the athletic department.

Above everything else, Broussard always stayed true to himself.

“Doc never tried to prove anything,” said Brown. “He just tested people to see if they would come to his side and see things his way. There is no other “Doc” Broussard I’ve ever met, he’s one of a kind and never tried to impress anyone.”