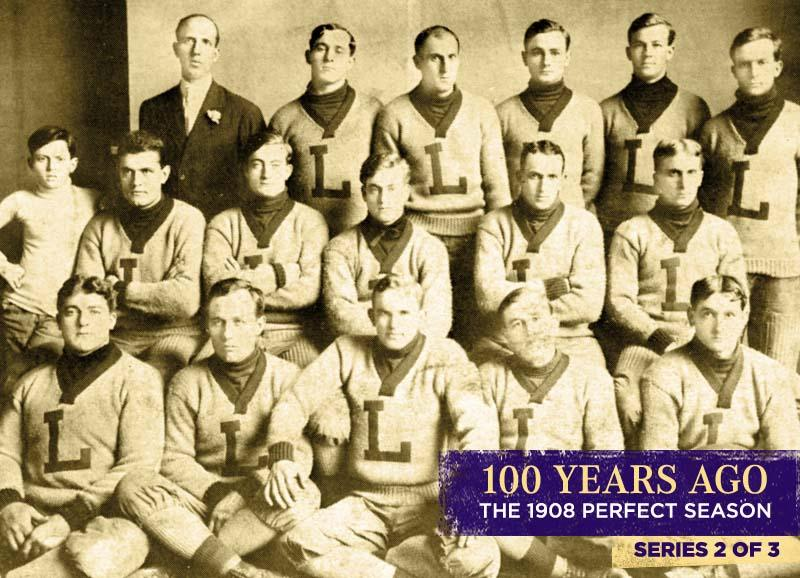 Note:  In recognition of LSU’s great undefeated football team of 1908, this is the second in a series of three stories to appear on LSUsports.net this week documenting that team. Today’s story is an excerpt from the book “The LSU Football Vault” about the 1908 season.  Yesterday’s story was about the 1907 season that set the stage for the heroics of the 1908 squad, and tomorrow’s story is about the great Doc Fenton.

Excerpt from “The LSU Football Vault” by Herb Vincent

By the time 1908 rolled around, coach Edgar Wingard had put all the pieces in place.  The schedule was favorable with none of those crazy back to back games that had taken its toll on previous LSU teams.  He had developed talent brought to LSU by his predecessor and he had added new stars.  And by the second game of the season he found the final piece to make 1908 a truly magical year.

The Tigers opened with a tune-up against the Young Men’s Gymnastics Club of New Orleans, an easy 41-0 rout in Baton Rouge.  The next week LSU won in a laugher, 81-5, against Jackson Barracks, but it was significant for two reasons.  First of all, Jackson Barracks recorded the only touchdown scored on LSU the entire season.  But more importantly, Wingard moved Doc Fenton to quarterback.

With such an incredible talent such as Fenton, why not put the ball in his hands every play?  It worked to perfection in the Wingard offense as Fenton, often running behind friend and former Mansfield Normal teammate Mike Lally, excelled at his new position.

The potential of this Tiger team caught Baton Rouge by storm and it became fashionable to be in attendance at an LSU football game.  For the first time women began to take an interest in Tiger football and businessmen discovered it was important to been seen at LSU games.

After Fenton’s debut against Jackson Barracks, LSU reeled off a couple of more routine wins, 26-0 over Texas A&M in a game played in New Orleans in front of 1,500 fans, and 55-0 over Southwestern Presbyterian of Tennessee, before a Halloween showdown at Auburn.

Over 800 fans boarded a train with their Tigers to travel to Auburn.  Meanwhile back home in Baton Rouge, there was a foreshadowing of the passion that is characteristic of LSU football today.  A large crowd of Tiger faithful crowded into a telegraph office for updates on the game.  The New Advocate, Baton Rouge’s daily newspaper, officially proclaimed “Baton Rouge is football crazy.” And it has been so ever since.

Auburn was one of the South’s top teams, sporting a stifling defense and potent offensive attack under head coach Mike Donahue.  But Wingard had some tricks up his sleeve.   The first four games of the season featured Fenton’s running prowess and an offense that used double and triple laterals at will.  Little did Auburn know that LSU would come out throwing the football.   The strategy took the hometown Tigers by surprise, highlighted by a 35-yard touchdown pass from Fenton to John J. Seip.  It would be the only touchdown scored on Auburn in 1908, but it was enough to send LSU to a 10-2 victory.

Although LSU football was riding high after the win over Auburn, the season was not without controversy.  Tulane, who wasn’t on LSU’s schedule in 1908, accused several Tigers of professionalism, but ultimately the SIAA found no wrong-doing.  The accusations were enough to cast a shadow over the season for LSU, but the Tigers were not to be slowed on the field.

Consecutive shutout wins over Mississippi State (50-0), Baylor (89-0), Haskell (32-0) and Louisiana Tech (22-0) gave the Tigers a 9-0 record going into the final game against Arkansas.  Over 5,000 fans showed up for the game in Little Rock.  The Razorbacks did manage to score to end LSU’s shutout streak, but Fenton shined again with a pair of touchdowns in leading the Tigers to a 36-4 victory.

LSU finished the year 10-0 overall and 2-0 in the SIAA and seven players were named to various all-star teams as the Tigers were named the best team in the south by the Memphis Commercial Appeal.

A doubt was cast on this team because of accusations of recruiting violations from Tulane that were enough for some publications to list Auburn as the champions of the south prior to the SIAA’s clearance of any wrongdoing by LSU.  But clearly the LSU Tigers were the best in the south and the first truly great team in LSU football annals.  Many years later, in awarding retroactive national titles to colleges, the 1908 Tigers were named co-national champions with Pennsylvania by the National Championship Foundation.