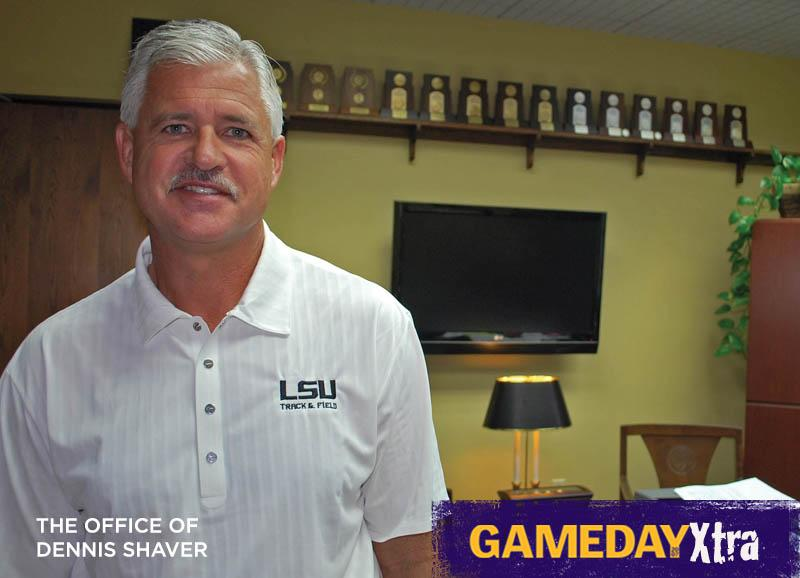 Dennis Shaver embodies the excellence of the LSU Track & Field program. Now in his fifth season as head coach after nine years as an assistant on the Tigers’ staff, he has helped lead LSU to 13 NCAA team titles, including the 2008 women’s outdoor championship.

Widely regarded as one of the premier sprint coaches in all of track and field, Shaver has coached 27 individual NCAA champions and 16 national champion relay teams at LSU while guiding his athletes to 238 All-America honors.

A visit to Shaver’s office reveals his sincere devotion to his profession.

View a few of these images described below and take a look at the full photo gallery.

Farm Boy
Shaver is a Kansas native and he grew up on a cattle farm, where the fences were constructed of limestone and barbed wire. Shaver’s wife gave him this piece of limestone with the attached barbed wire during his junior college coaching days in his home state.

Salute to the Champions
The 2002 LSU track and field teams visited President George W. Bush at the White House when Shaver was a Tiger assistant coach.  The ’02 men’s team captured the outdoor NCAA title while the women’s team claimed the indoor national crown. Shaver was unable to attend the White House ceremony, so sprinter Alleyne Francique gave him a commemorative photo of the event.

Glory Days
Shaver displays in his office a wooden relay baton from the SEC Championship Meet in 1948, when LSU captured the league title. The baton was given to Shaver by the family of Tom Dickey, who helped lead the Tigers to the ’48 conference crown with first-place finishes in the 440-yard dash and the mile relay.

World Traveler
Shaver has traveled extensively abroad — as evidenced by his collection of official credentials ? coaching LSU athletes in numerous international meets. He has attended each of the past four Olympics, including the 2008 Games in Beijing, where LSU sprinter Richard Thompson won two silver medals.

Rings of Honor
Shaver’s office features a display case that holds the multitude of championship rings he has earned during his LSU tenure. The Tigers and Lady Tigers have combined to win 13 NCAA team championships during Shaver’s 13 seasons in Baton Rouge.

Speed Racers
LSU’s 4×400 relay team in 2005 turned in one of the greatest performances in NCAA history, setting a collegiate record time of 2:59.59 at the national championship meet in Sacramento, Calif. The team of Xavier Carter, Bennie Brazell, Reginald Dardar and Kelly Willie surpassed the previous mark of 2:59.91 set by UCLA in 1988.