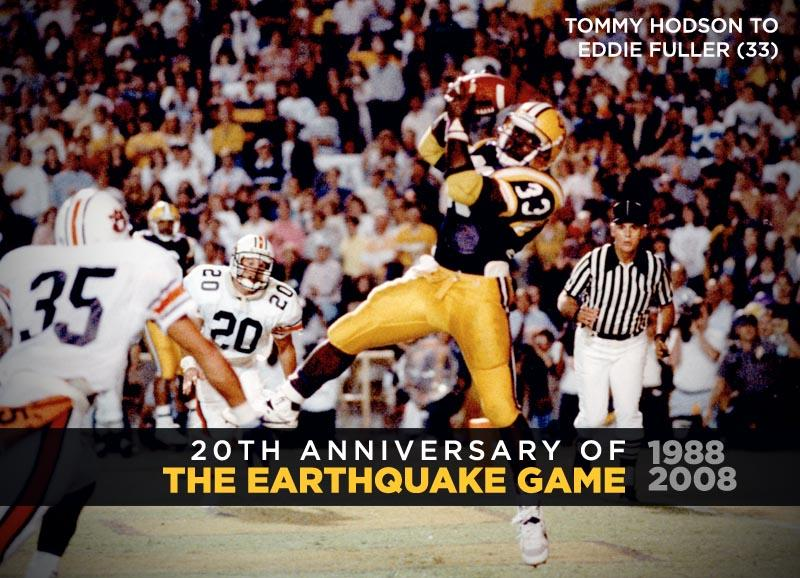 It is the stuff of legend.

With national rankings at stake and a national audience watching on ESPN, LSU quarterback Tommy Hodson threw a touchdown pass to tailback Eddie Fuller on fourth down with 1 minute, 47 seconds remaining in the game. The eruption of the crowd registered as an earthquake on the seismograph located in LSU’s Howe-Russell Geoscience Complex.

Today, Hodson and Fuller say that after 20 years, the 1988 LSU-Auburn game is still an earthshaking experience. In fact, both say the famous play is even bigger now than it was then, since it has taken on a life of its own as part of LSU folklore.

“Initially, I didn’t believe it,” Fuller recalled of first hearing that the crowd noise registered on the seismograph. “I think it took a couple of years for it to sink in. It never dawned on me how big that play was here until years later, when I came back to LSU.”

Fuller said he first began to realize how amazing the “earthquake” game was when he saw it featured in a Ripley’s Believe It or Not Museum in the early 1990s. “I was going through this Ripley’s museum in Niagara Falls, and I looked up and there it was!” he laughed.

Hodson said he remembers opening LSU’s student newspaper, The Reveille, and seeing a photo of the seismograph reading, or seismogram. “The story is even bigger now than when it happened,” Hodson said. “To have my name tied in with that play is an honor. It’s great to be a part of LSU history.”

The Earthquake Game is one of those magical moments in LSU history that fans and the media relive year after year. And although Hodson and Fuller are the two names most often mentioned in connection with the game, they were quick to give credit to some of the game’s unsung heroes.

“The defense,” they both said in unison. Indeed, the defense held Auburn ? which was ranked No. 4 in the nation at the time ? to only two field goals in the game. And after LSU scored the touchdown and kicked the extra point, Auburn’s offense got the ball back with 1:41 on the clock. The LSU defense preserved the 7-6 win.

Every Tiger fan who was at the Earthquake Game has some memory of that famous touchdown and the ensuing celebration. There are stories of downed light fixtures in the North Stadium dormitory, which was still open to students at the time; strangers hugging one another in the stands after the touchdown; and the incredible noise of the crowd. But Hodson and Fuller have their own memories of the game, and apparently, fans weren’t the only ones holding their breath on that fourth-down play.

“Time stood still,” Fuller said. “I saw Tommy throw the ball and it looked like a defender might have tipped it. It took forever for the ball to get to me, and it seemed like I almost dropped it because I had waited so long.”

“The defender didn’t tip it,” Hodson said with a smile. “But his hands were right there.”

When LSU fans learned that their reaction registered on a seismograph, they were pleasantly surprised. But LSU geologists were downright stunned.

Riley Milner, research associate with the Louisiana Geological Survey, was the first one to discover the seismograph reading. He walked into the Howe-Russell Geoscience Complex on the Monday after the game, and the seismogram caught his eye.

“I saw a very distinct recording of something and my first reaction was, ?What in the world is this?’” he said. He took the seismogram to Donald Stevenson, the researcher then in charge of LSU’s seismic program. “We tried to figure out what it might be, and we backed up the time and realized it coordinated perfectly with the time of the touchdown,” Milner said. “It was a total surprise. We never expected the seismograph to pick up the ground shaking from a football game.”

Even more of a surprise was that the seismogram showed 15 to 20 minutes of recorded ground shaking. That’s right ? 15 to 20 minutes. “It was a solid register of jubilation in the stadium,” Milner said.

Surprisingly, when asked about their fondest memories at LSU, neither Hodson nor Fuller mentioned their accomplishments on the football field.

“My greatest memories are of Broussard Hall (which was then the athletic dormitory) and the camaraderie with all the guys,” Hodson said. “There is a common bond among all LSU players that is amazing, even between players from different eras. That’s the greatest part of playing football for LSU.”

“My greatest accomplishment at LSU is graduating,” Fuller said. “When I got drafted by the Buffalo Bills, I promised my mom I would come back to LSU and finish my degree.”

Fuller said he intended to enroll for the spring semester of 1991 after his first pro football season ended. But instead, his team went to the Super Bowl, which meant the season didn’t wrap up until LSU’s spring semester was well under way. In fact, that happened for four years in a row, as the Bills and Fuller competed in four straight Super Bowls from 1991-1994. After his time with the Bills, Fuller played for the Carolina Panthers in 1995. He completed his degree ? and his promise to his mother ? in 1997.

Today, Fuller lives in Prairieville, La. After a working as a special events coordinator for LSU’s Tiger Athletic Foundation, Fuller moved on work in medical sales for Johnson and Johnson. He and his wife Tressa have one daughter, RaeDiance, who is 11 years old.

Hodson graduated from LSU in 1990 and played for the New England Patriots from 1990-1992. After brief stints with the Miami Dolphins and the Dallas Cowboys, he played for the New Orleans Saints in 1995 and 1996. Today, he lives in Baton Rouge, where he works for JTH Agency, a company in electrical apparatus sales.

He and his wife, Andy have twin daughters named Catherine and Christina, who are 13 years old.

Both Hodson and Fuller agreed that one of the best things about the earthquake game being shown year after year is that their children get to see it. Also, they are forever linked with one of LSU’s greatest moments.