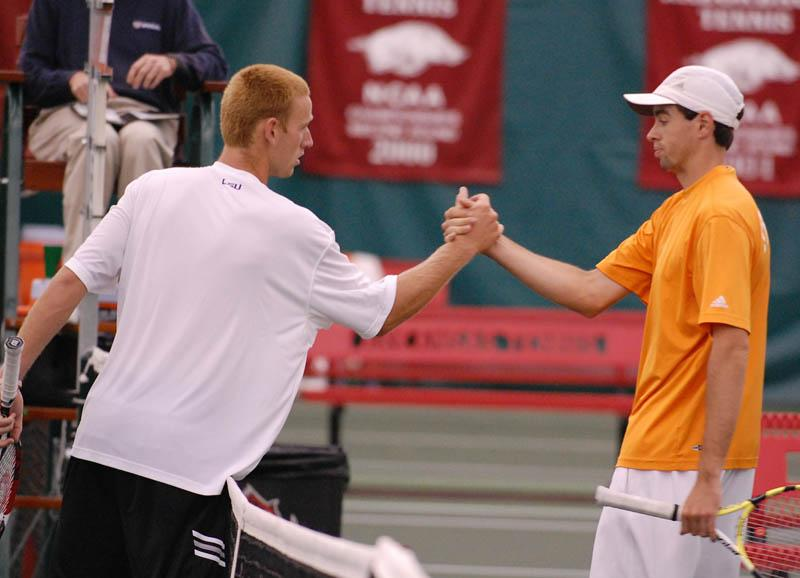 Venus, who is playing as an amateur, teamed up with 15-year-old pro Ryan Harrison and reached the doubles finals by knocking off Philipp Oswald and Martin Fischer of Austria in three sets, 3-6, 6-3, 10-7. Venus and Harrison fell to USA’s Phillip Simmonds and Tim Smyczekin in the finals, 2-6, 6-1, 10-5.

“We had close matches all week and just played the big points well,” Venus said. “We couldn’t get it done today but it was still a good experience to go through.”

LSU senior Colt Gaston also competed as an amateur in the doubles portion of the challenger. Gaston teamed up with Scoville Jenkins and reached the quarterfinals before falling to Harrison and Venus, 7-6 (5), 6-7 (3), 10-7.

Venus is listed in the Intercollegiate Tennis Association national rankings in both singles (No. 26) and doubles (No. 18). Venus and doubles partner James Cluskey have compiled a 14-5 record this season and have captured four wins against ranked duos.

Harrison is a native of Shreveport and made history last week at the U.S. Clay Court Championship in Houston by becoming only the 10th player in the Open era to win a main-draw match before his 16th birthday. He is also the youngest player to get a main-draw win on the ATP tour since Rafael Nadal, who is currently ranked No. 2 in the world, won his first tour match in Mallorca in 2002.

Harrison was eliminated from the Clay Court Championship by tennis star James Blake on April 17 in straight sets, 6-3, 6-2.

The Tigers will next hit the court Friday, May 9 in the opening round of the NCAA Tournament. The NCAA Tournament selection show will air between 1-1:30 p.m. CT, Tuesday, April 29, on ESPNews.