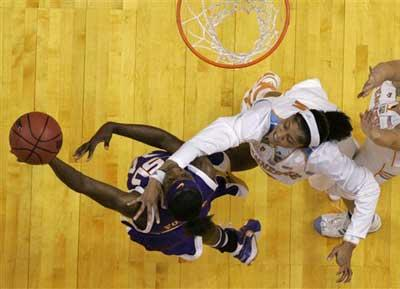 TAMPA, Fla. — Tennessee’s Alexis Hornbuckle rebounded a missed shot and dropped in a layup with 0.7 seconds left to play to bail the Lady Vols out after LSU’s Erica White hit two free throws with seven seconds to play to give Tennessee another improbable 47-46 win over the LSU Lady Tigers in the national semifinals of the NCAA Women’s Final Four Sunday night at the St. Pete Times Forum.

The win puts Tennessee in the national championship game Tuesday night against Stanford as the Cardinal upset UConn in the opening game of the night. Tennessee is now 35-2 on the season, while LSU falls to 31-6.

The loss continues the nightmarish streak of no LSU team, men or women, advancing past the national semifinals in nine NCAA Final Four appearances. To make matters worse, it was wildly reminiscent of the loss in LSU’s first appearance in a women’s Final Four five years ago when it lost in New Orleans to the Lady Vols on a final second steal and bucket. It also brought a tough end to the magnificent careers of the eight LSU seniors who have been a major part of LSU’s “Drive For Five” NCAA Final Fours.

The loss dampened an LSU rally in the final minute that saw the Lady Tigers battle back from 45-42 down with 51 seconds to play. Alberta Auguste made the bucket for the three point lead and was fouled, but she missed the free throw. White drove to the other end, scored and LSU called time out with 40 seconds to play.

Tennessee came down and with LSU playing no foul defense, down one, the Lady Vols missed a shot by Hornbuckle and White rebounded and drove the court and was fouled 35 feet from the bucket by Hornbuckle with 7.1 seconds to play. White made the first free throw to tie the game and Tennessee called time out and White went to the line for a second. White’s shot was good and LSU led 46-45 and Van Chancellor called his final time out.

Anosikie got a pass down low, missed a layup but the rebound fell into Hornbuckle’s hand and she laid it in with 0.7 seconds to play. After the officials checked the clock to determine the official time, the long inbounds pass was short and intercepted by the Lady Vols to send LSU reeling to another Final Four defeat again.

Sylvia Fowles finished the game with her fifth game of 20 points and 20 rebounds with 24 points, 20 rebounds and five blocked shots, but it took a 10-of-24 night from the field and a 4-of-11 free throw total to get it as well as battling a severe case of cramps in the final five minutes. She was the only Lady Tiger in double figures as LSU shot just 19-of-54 from the field (35.2 percent), 1-of-9 from the arc and 7-of-19 from the stripe. Without Fowles, the Tigers were just 9-of-30 from the field. Quianna Chaney had nine points, White seven, Ashley Thomas 4 and Allison Hightower 2.

Tennessee’s Candice Parker, showing the effects of the bad shoulder had 13 points and 15 boards, hitting just 6-of-27 shots of her own as part of Tennessee’s 21-of-69 shooting percentage. Auguste hit 10 points and Bobbitt, who hit three treys, had 11 points.

With all the missed shots there were plenty of rebounds and LSU out rebounded Tennessee, 47-45. LSU had 12 turnovers to seven for Tennessee.

The teams both came out looking for their main weapons Parker and Fowles and neither player was on track early as Parker was 0-for-3 in the first five minutes and Fowles was 1-for-4 and 0-for-2 from the line. LSU was able to get the ball to Fowles early on almost every possession but appeared to be rushing the possessions to try and get the ball inside. Both teams started out a combined 2-of-15 from the field as Tennessee scored on a Nicky Anosike free throw and a bucket by Auguste and LSU got its first two points on Fowles bucket at the 18:11 mark as Tennessee held a 3-2 lead that seemed to last for several minutes.

Finally after almost six minutes of neither team scoring with the teams going a combined 2-of-22 from the field, the teams began to flurry. Chaney drove the baseline to give LSU its first lead at 4-3 at the 12:29 mark. Anosike answered with a free throw jumper to make it 5-4 Tennessee at the 12:09 mark. Chaney got another bucket and Parker, with her shoulder obviously hindering her early, made her first field goal in close at the 11:23 mark to give Tennessee a 9-6 advantage.

LSU’s offense in the first nine minutes showed little of the movement or screens that worked so well in the early rounds of the tournament and Tennessee was letting LSU have just one shot on almost every possession. LSU’s defense flexed its muscle at the 9:39 mark when LSU held Tennessee without a shot.

Tennessee moved the lead to 11-6 when Auguste hit a layup with 10:35 in the half with Hightower cutting the margin to 11-8 with 9:23 to go. But LSU missed a couple of opportunities and White picked up her second foul and went to the bench with 7:50 to play in the first half as Coach Chancellor implored his team  to get its offense going. Fowles picked up her first foul at the 7:37 mark.

Fowles three points on two possessions to get LSU back to 13-11 with 6:38 to go in the half, but then Parker finally got going with buckets on two post feeds and a run out with 5:37 left to go up 19-11 forcing the Lady Tigers to call a timeout.

After 16:30 of the first half, LSU was just 5-of-22 from the field and being out rebounded 22-16 and at the last media timeout LSU was on another scoring drought typical of some its previous Final Four appearances having failed to score in almost three minutes.

But out of the timeout Fowles ended that, taking a pass from White to score and was fouled to make it 19-14, but Bobbitt hit a three to take it back to 22-14. Fowles scored again to go to first half double figures as she scored 10 of the team’s first 16 points. Fowles scored with 1:04 to play wide open underneath to make it 22-18 as Tennessee called time out, the closest LSU had been since it was 13-11 five and a half minutes prior and that’s the way the teams went to half.

Early in the half, the Tigers continued a 7-3 run by scoring the first five points of the half to take the lead briefly. Fowles came out and scored at the 19:27 mark to cut it to 22-20 and then White drove the lane, scored and was fouled. The old fashioned three-point play gave LSU a 23-22 lead with 18:48 to play.

The teams traded baskets before Bobbitt hit her second three of the game to give UT a 27-25 advantage going to the under 16 minute media timeout. LSU hit 3-of-its-first 6 shots in the opening four minutes while Tennessee opened just 2-of-7.

Suddenly the Lady Tigers found their spark despite missing free throws galore as Fowles hit a jumper and one free throw on another possession to cut it to 37-30. A big swing came when Parker missed a three and Chaney on the other end hit a trey to make it 37-33. Then Thomas hit back to back runners and the game was tied at 37-37 with 7:36 to play with LSU showing the most life it has shown in a Final Four game since its first appearance five years ago.

Fuller put Tennessee back in front 39-37 as the game went to the under eight media timeout but it was beginning to be obvious to the sellout crowd that LSU was playing the better of the two teams at that point.

Fowles scored her 21st points to tie the game at 39-39 and LSU missed a layup and a trey that would have given them the lead and then allowed Bobbitt the chance to drive the floor for a layup and a 41-39 advantage. LSU then missed two more shots and Tennessee connected on a 17-footer by Anosike to take a 43-39 advantage.

Hurting LSU was that since being put in the bonus by Tennessee at the 11:29 mark, the Lady Tigers were just 1 of 8 from the free throw line as the game went under 4:30 to play and Fowles was showing signs of fatigue and possible leg cramps.

Fowles missed a shot on the next LSU possession and Tennessee came down and had Parker work against Fowles, the shot was missed and Tennessee rebounded and was fouled sending the Lady Vols to the line after the final media time out where LSU trainer Micki Collins spent the entire timeout icing down Fowles legs.

At the line, Hornbuckle missed but Tennessee got another offensive board and Parker’s shot was blocked by Fowles with five on the time and 2:35 on the game clock with LSU still down, 43-39. The ball came in to Parker and Fowles blocked it again and got her 19th rebound giving LSU life. Fowles scored with 2:05 to play to make it 43-41, Tennessee.

Parker missed and LSU came up with 90 seconds left and the ball. Baugh fouled Fowles with 1:18 left and before the two shots Tennessee called time out giving the trainers a chance to work on Fowles knees and upper legs. Fowles first shot was a swish to make it 43-42 setting up the final wild minute of play.

Individual
– Sylvia Fowles moved into first-place for career post-season games in LSU history. Tonight’s game was Fowles 20th.
– RaShonta LeBlanc moved into a second-place tie for career post-season games in LSU history, playing in her 19th game tonight.
– Erica White and Quianna Chaney both moved into third-place in career post-season games in LSU history. They played in their 18th game tonight.
– Sylvia Fowles scored in double figures for the 34th game of the season and the 124th game of her career with 24 points in tonight’s game. Fowles has now scored in double figures in 15 of her 20 NCAA Tournament games.
– Sylvia Fowles recorded her 24th double double of the season, 86th of her career and the 10th in a NCAA Tournament game with 24 points and 20 rebounds tonight.
– Sylvia Fowles recorded her fourth 20-20 game of her career with 24 points and 20 rebounds in tonight’s game.

Sylvia Fowles was not available for the media following the game because her legs cramped during her attempt to come to the post-game news conference. Fowles was treated by the LSU training staff during the media opportunity. Below are comments from Fowles…

On the last play:
“My role was to get back and make sure Candace (Parker) didn’t get anything easy. What happened is tough.  All this time the coaches stressed to box out and we didn’t do it at that time.”

On her Performance:
“I got off to a slow start, I think i was either anxious or nervous but I picked it up in about the last eight minutes and things started to go my way.”

On Cramping up
“It was tough, I kept looking at Ashley Thomas and she kept me motivating me and kept telling me there was 3 minutes to go or two minutes to go, hang in there.”