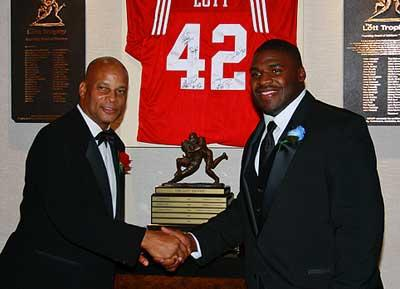 BATON ROUGE — All that really remains for LSU defensive tackle Glenn Dorsey is a national championship as the senior picked up his fourth national award late Sunday night as he was named the winner of the 2007 Lott Trophy, the Pacific Club of Newport Beach, Calif., announced.

The award is the fourth for Dorsey as he had already been named the recipient of the Nagurski, Lombardi and Outland trophies earlier in the week. Dorsey, who was named to several all-America teams, was also named the Southeastern Conference Defensive Player of the Year making him the most decorated defender in LSU history.

Saying that he had unfinished business to take care of, Dorsey decided to return to LSU for his senior season despite being projected as a high first round draft pick a year ago. The unfinished business was winning an SEC title and playing for a national title.

Dorsey has already accomplished the SEC title with LSU’s 21-14 win over Tennessee on Dec. 1 in the league’s championship game. That victory helped propel the Tigers into the BCS National Championship Game against Ohio State on Jan. 7 in New Orleans.

Dorsey was presented the trophy by Ronnie Lott, the Hall of Fame defensive back who starred at USC and was an All-Pro in the NFL. The other finalists were James Laurinaitis of Ohio State, J Leman of Illinois and Chris Long of Virginia.

In its fourth year, The Lott Trophy honors the college football Defensive IMPACT Player of the Year.  The student-athlete is judged on both his on-field performance and his off-field performance.  The Lott Trophy is the first sports award based on personal character and is appropriately named after the legendary defensive back, Ronnie Lott.  The first three winners were David Pollack of Georgia, DeMeco Ryans of Alabama and Dante Hughes of Cal.

On the field, Dorsey has recorded 64 tackles, 11.5 tackles for losses and six sacks for the Tigers despite playing the second half of the season with injuries to his knee and back. He’s also the undisputed leader of an LSU defense that ranks third in the nation in yards allowed.

Off the field, Dorsey is an active participant in many community service activities in Baton Rouge and his hometown of Gonzales. Most recently, Dorsey served as the Grand Marshall of the Gonzales Christmas Parade last weekend. He also makes frequent trips to his grade school and high school to speak to kids about the dangers of drugs and doing well in school.

Voting for the winner was conducted by Ernst & Young with ballots being sent to college offensive and defensive coordinators, national media, The Pacific Club IMPACT Foundation Board of Directors, a Board of Advisors made up of former NFL players and coaches as well as the Master Coaches, a group of distinguished former college head coaches.

LSU will receive $25,000 from The Pacific Club’s IMPACT Foundation for its general scholarship fund while Ohio State, Illinois and Virginia will each receive $5,000.