by LSUsports.net (@LSUsports)
Next Stop: Wednesday at 7 p.m. in Houston for Lombardi Award +0 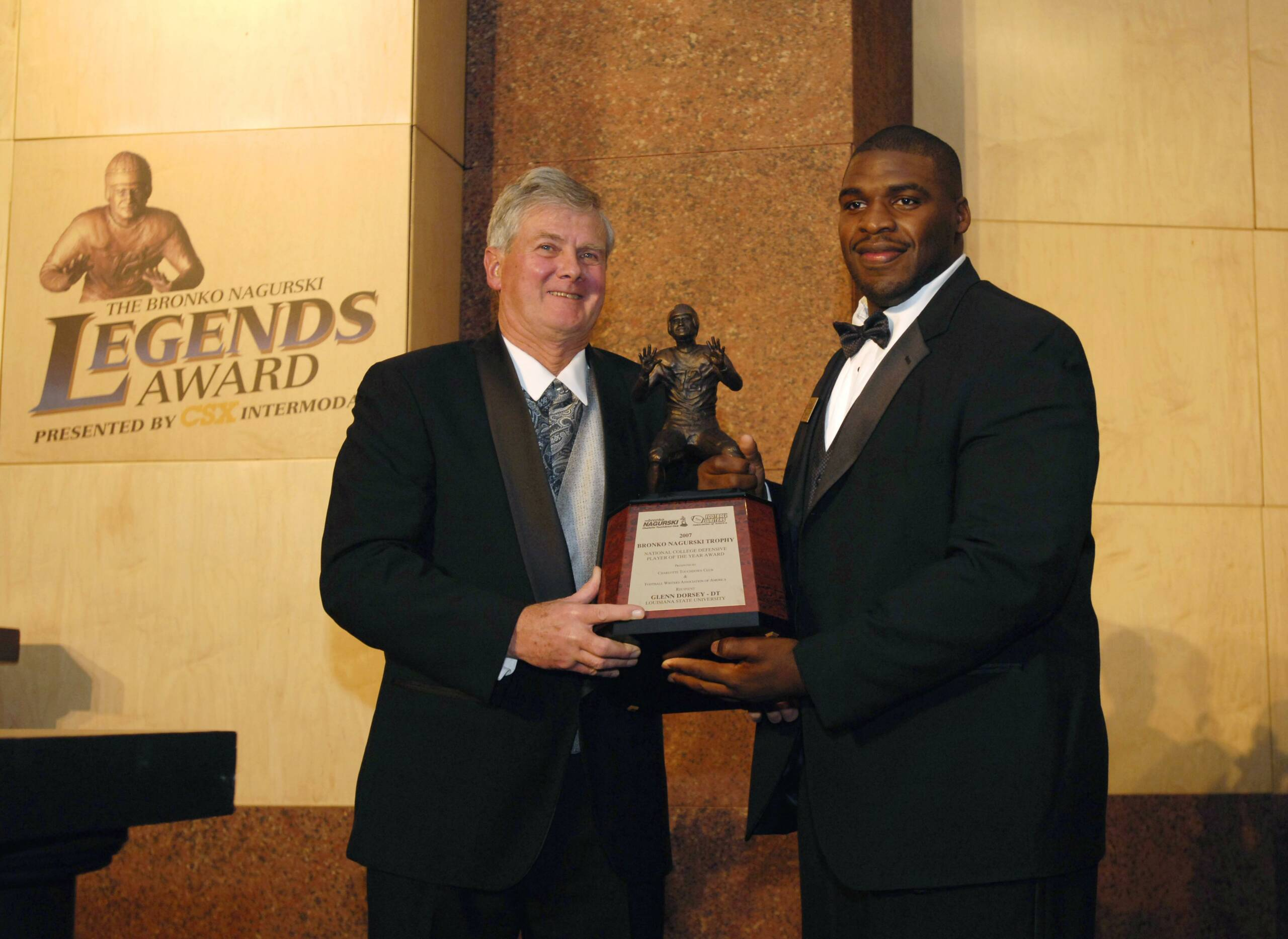 CHARLOTTE, N.C. — LSU senior defensive tackle Glenn Dorsey was named the recipient of the Bronko Nagurski Trophy on Monday evening by the Charlotte Touchdown Club. The award, voted on by the Football Writers Association of America, is presented annually to the nation’s best defensive player in college football.

“I am truly humbled to accept this award tonight,” said Dorsey. “To be considered by someone else to be the best defensive player in the country means a lot. There are a lot of great athletes out there that work hard and I am grateful for the opportunity to represent them.”

Dorsey was presented the award on Monday night at the Westin in Charlotte with head coach Les Miles watching from the audience. Dorsey is the first LSU player to win a national award since Rudy Niswanger won both the Draddy Trophy and the Wuerffel Award following the 2005 season.

Dorsey was selected from a group of finalists that included Chris Long of Virginia, George Selvie of South Florida, Aqib Talib of Kansas and last year’s Nagurski winner, James Laurinaitus of Ohio State.

This is the first national award for Dorsey who has also been named a finalist for the Outland, Bednarik, Lombardi and Lott Awards this season.

Dorsey returned for his senior season after turning down what would have been a chance to be a high first round draft pick in last year’s NFL Draft, saying he still had business to take care at LSU, such as winning a Southeastern Conference Championship and a national title.

Dorsey has helped the Tigers accomplish one of those goals as LSU beat Tennessee on Saturday to claim the SEC title. The Tigers will go after the other goal on Jan. 7 when they face top-ranked Ohio State in the BCS National Championship Game in New Orleans.

“Glenn represents all that is good about college football,” said Miles. “He’s a team player with great leadership ability. He has all of the qualities and characteristics of a champion both on the field and off the field. He’s a tremendous ambassador, not only for our football team, but for Louisiana State University. He’s very deserving of this award and I’m so proud and fortunate that Glenn Dorsey is an LSU Tiger.”

Dorsey, a native of Gonzales, La., is the undisputed leader of an LSU defense that ranks third in the country in total defense and is listed among the top two in five different statistical categories in the SEC this year.

He paces an LSU squad that is holding opponents to just 283.8 yards of offense and 19.6 points per game.

Individually, Dorsey has garnered accolades from nearly every entity. Last week he was named a first-team All-American by the American Football Coaches Association and Rivals.com for the second straight season. He is just the ninth player in LSU history to earn first-team All-America honors in back-to-back seasons.

Through 13 games this year, Dorsey ranks as the Tigers’ third-leading tackler with 64 stops to his credit. He is also responsible for six sacks, 11.5 tackles for loss, four quarterback hurries and three passes defended.

The 15-year old awards banquet not only recognizes the best college defensive player, but also helps raise money to recognize the recipients of regional high school and college scholarships through the Charlotte Touchdown Club Scholarship Foundation.