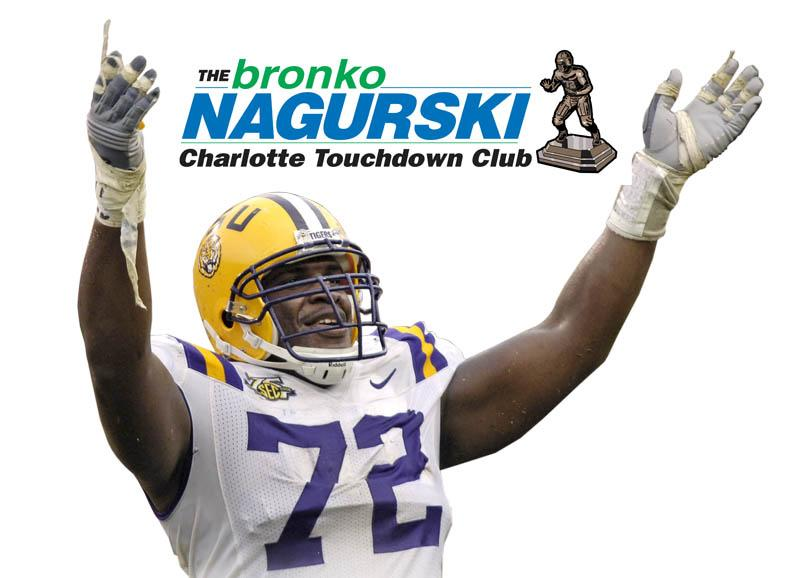 BATON ROUGE — LSU defensive tackle Glenn Dorsey has made the cut for another national award, this time being named as one of five finalists for the Bronko Nagurski Trophy, the Football Writers Association of America and the Charlotte Touchdown Club announced on Thursday.

It’s the second award that Dorsey has made the list of finalists for this year as he’s also one of four finalists for the Rotary Lombardi Award, which is given to the top interior lineman (offense or defense) in college football.

“This is another tremendous honor for Glenn,” LSU coach Les Miles said. “Glenn is very deserving of such an honor because of what he represents, both on and off the field. He’s as dominant a player at his position as there is in college football. His impact inside and the way he disrupts things in the middle is tremendous.”

Dorsey is the undisputed leader for the top-ranked and 9-1 Tigers. In 10 games this year, he’s managed to accumulate 53 overall tackles, despite being double and triple-teamed on just about every snap. In addition to his 53 tackles, he has recorded 11.5 tackles for losses and six sacks.

He’s also batted down three passes and posted four quarterback hurries to lead an LSU defense that ranks among the top 10 in the nation in five categories, including a No. 1 rating in total defense at 236.87 yards per game.

Dorsey has twice been recognized by the SEC for his play during the season. He was named SEC Defensive Player of the Week following LSU’s 41-34 win over Alabama. In that game, he recorded seven total tackles, two going for losses and a sack in the win over the Crimson Tide.

Earlier this year, Dorsey was the SEC Defensive Lineman of the Week in the Tigers’ 28-16 win over South Carolina. In that game, Dorsey picked up eight tackles and a sack as the Tigers limited the Gamecocks 17 yards in the contest.

The winner of the Bronko Nagurski Trophy will be announced at a gala at the Westin Hotel in Charlotte, N.C., on Dec. 3. Virginia Tech coach Frank Beamer will give the keynote address.

The FWAA award is named after Nagurski, who dominated college football at Minnesota as a bruising fullback and tackle from 1927-29. He could have been an All-America at any position, playing 60 minutes and was the best player wherever he lined up.

The Charlotte Touchdown Club is a non-profit organization founded in 1990 for the purpose of promoting high school, collegiate, and professional football in the Charlotte, N.C. region. The club’s activities and services focus community attention on the outstanding citizenship, scholarship, sportsmanship, and leadership of area athletes and coaches.

The official website of the Charlotte Touchdown Club is www.touchdownclub.com.

The Football Writers Association of America, a non- profit organization founded in 1941, consists of nearly 1,000 men and women across North America who cover college football for a living. The membership includes journalists, broadcasters and publicists, as well as key executives in all the areas that involve the game. The FWAA works to govern areas that include gameday operations, major awards, a national poll and its annual All-America team.