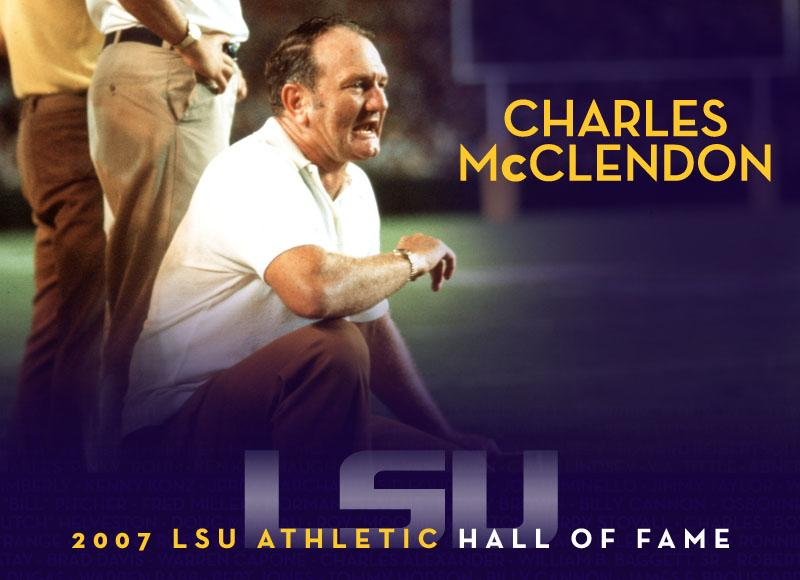 Editor’s Note: Last of five installments featuring the 2007 inductees to the LSU Athletic Hall of Fame.

In the world of college football, that was both the nickname and job description for Charles Youmans McClendon.

For a quarter-century, that name ? or “Charlie Mac” ? as an assistant or head coach was how he was addressed or referred to. Say it and practically everyone in the sphere of sports immediately thought of LSU football. He really was Tiger football.

As a head coach McClendon never guided a team to the national championship ? the current method of media evaluation of coaches ? though as an assistant, serving as what we would now call a “defensive coordinator,” Coach Mac was an indispensable figure in the molding and ultimate execution of the 1958 national championship team ? but he left LSU as the winningest head coach in school history, and as the architect of a half-dozen of the greatest victories in LSU’s 113 years of football.

A straight-talking Arkansas country boy, McClendon was the antithesis of the flamboyant and media-conscious coaches of today. He was always himself, a regular guy who made time to talk to “regular folks.” He once said, with a malaprop of a Will Rogers saying, “I guess I’m a little bit like Mae West. I never met a man I didn’t like.”

There was plenty of success, a memorable defeat of Texas in the 1963 Cotton Bowl, a stunning upset of an Arkansas team on the scent of a national championship, a literal thrashing of Notre Dame in Tiger Stadium.

McClendon coached the 1969 Tigers, perhaps the best football team in school history, one that averaged a hair under 35 points a game and gave up fewer than 400 yards on the ground ? for the season! From then through 1973, five consecutive years in the era when a 10-game regular season was the norm, his Bayou Bengals won nine games each year.

Still, that elusive national title, or unbeaten season, coupled with his down-home personality and an inability to beat Alabama ? then at its zenith under Bear Bryant, although McClendon was the first of Bryant’s former players to beat him twice ? meant fans were never completely satisfied.

Carl Maddox, who was athletics director during most of McClendon’s tenure, once said knowingly, “Mac is like the biblical prophet without honor in his own country. I think some of these fans will realize what he’s accomplished after he’s gone.”

It was true. McClendon has been elected into the LSU Hall of Fame ? the first person to make it as a coach. Gaynell Tinsley and Jerry Stovall are both in, but as players. Until two years ago, when the by-laws were changed, the only people eligible were LSU letter-winners.

Here are some of the reasons why the Hall wouldn’t be complete without Coach Mac.

In short, McClendon was the most successful (137-59-7) football coach in Tiger history in terms of victories. The McClendon Era was, if not exactly the golden age of LSU football, then the gold-plated long-term span in the program’s history.

He did it before the computer, high-tech recruiting era, in the day when you spotted or scouted a kid and decided he could play, or couldn’t play. If they couldn’t, and he signed them, he taught them to play.

All-American safety Tommy Casanova said, “We were just a bunch of small, slow kids that didn’t realize (their shortcomings). We didn’t grow as big as the kids in the Midwest, or on the East Coast, or on the West Coast, but we just stepped out there and scrapped for 60 minutes every game. I just think Coach Mac and the tradition of LSU football just brought it out of us.”

Casanova said in a discussion on LSU with legendary Cincinnati Bengals coach Paul Brown and some assistants, “I said, ?Gosh knows, we should have won this and we should have won that.’ They just busted out laughing. He (Brown) said, overstating his point just a bit, ?You guys shouldn’t win four games a year. Look at the amount of talent you put in the pros. You guys shouldn’t win what you win.’

“They just marveled at the record Coach Mac had year after year, winning 70 to 80 percent of his games. Brown said, ?You guys just don’t have the (overall) talent to do what you do. We just can’t believe it.’ “

But there it is, right there in the record books, under the heading “Coach Mac.”