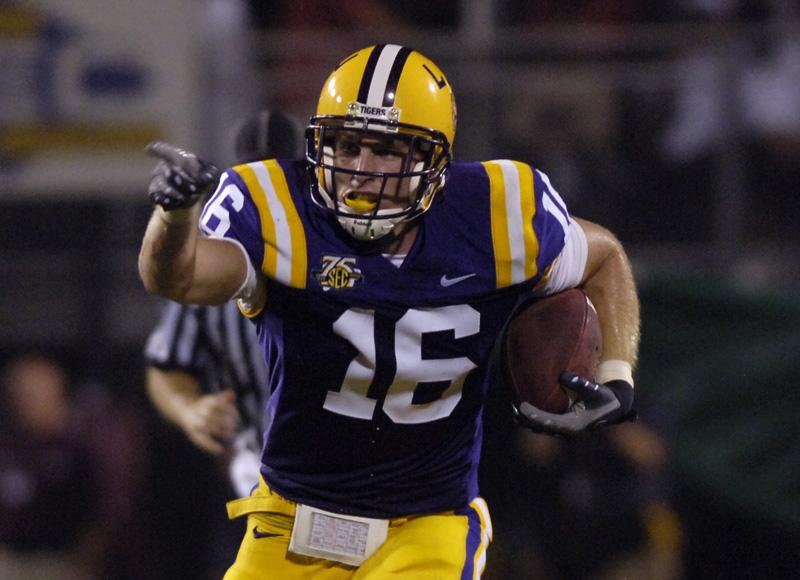 STARKVILLE, Miss. — It took the second-ranked LSU football team a quarter to find the rhythm it last displayed in New Orleans in January. After that, the Tigers marched all over Mississippi State to the tune of 45-0 to open the college football season.

The vaunted Tigers defense reeled in six interceptions and a fumble recovery, while the offense under fifth-year senior Matt Flynn turned them into into 38 points. LSU opened a 17-0 halftime lead and never looked back in front of 50,112 fans at Davis Wade Stadium in Starkville.

In the first half, two 1-yard touchdown runs by LSU running back Keiland Williams and a 27-yard field goal by Colt David all came as a result of the interceptions.

Three of the Tigers’ four second-half scores also came after Bulldogs turnovers. The other culminated a perfectly executed 73-yard drive after the second-half kickoff.

Jacob Hester led the Tigers’ stable of running backs with 68 yards on 14 carries, as Williams finished with 18 yards on seven carries with two touchdowns. In late action, Richard Murphy saw his first career action with six carries for 35 yards.

Backup quarterback Ryan Perrilloux played the entire fourth quarter, running for a 3-yard score and connecting with Brandon LaFell for an 11-yard touchdown. Perrilloux was 2-for-3 passing for 21 yards. Early Doucet had a career-best nine catches for 78 yards.

LSU outgained Mississippi State on the ground, 198-10, including minus-37 yards for the Bulldogs from sacks (minus-19 for LSU from sacks).

The Bulldogs struggled in all phases against the Tigers’ top-notch defense.

While six of Mississippi State quarterback Matt Henig’s 28 passes were intercepted, he finished 11-of-28 passing for 120 yards. The Bulldogs gained only 10 net yards on 26 rushing attempts.

LSU finsihed with four sacks, while Mississippi State had three.

On State’s second offensive drive, LSU linebacker Ali Highsmith‘s stunt up the middle forced Henig to throw before his target could complete his route and allowed sophomore safety Danny McCray to snag his second career interception.

Flynn took over at the Mississippi State 45-yard line and handed off to Hester up the middle for 15 yards. After a quarterback keeper gained five yards, Flynn pitched to Williams for a 13-yard gain to the Bulldogs 12.

However, the Tigers were unsuccessful on consecutive pass attempts and settled for a 27-yard Colt David field goal. With 6:28 left in the first quarter, LSU led 3-0.

On its third possession, Mississippi State earned a new set of downs twice before Henig fumbled the fourth-down snap as the evening’s heaviest rain fell. LSU started a third-consecutive drive into Bulldogs territory at its own 39-yard line.

This time, a pair of stops behind the line kept the Tigers out of field goal range. Patrick Fisher punted from inside the MSU 40 into the endzone for a touchback. After booming two punts through the endzone early in the contest, the first-time starter  changed field position for the Tigers several times after. Fisher finished with seven punts for a 44.9 average, including three better than 50 yards.

Henig put too much air under a long pass down the sideline, allowing LSU cornerback Jonathan Zenon to claim the Tigers’ second interception of the game. LSU again took advantage of the mistake, driving 38 yards on eight plays for its first touchdown of the season.

The Bulldogs used a 30-yard kickoff return and a 27-yard pass from Henig to tight end Jason Hubband to drive into LSU territory. However, the quarterback’s third interception of the half landed in LSU safety Craig Steltz‘ arms in the LSU end zone to end the threat.

Though the Tigers’ offense was pushed back nearly to its goalline, Fisher saved his team field position with a 55-yard punt from his endzone.

On the next play from scrimmage, Henig was picked-off for the third time in final five plays of the first half — this time by LSU safety Curtis Taylor.

Taylor got a chance to return his 22 yards into Bulldogs territory, setting up LSU’s final score as the half ended.

On second-and-goal from the 1 with four seconds to play, LSU head coach Les Miles elected to go for the touchdown. Williams ran of the left side for his second touchdown of the game as the stadium horn sounded.

David’s point-after-touchdown gave LSU a 17-0 lead at the half.

The Tigers wasted little time getting in gear offensively in the second half, methodically dissecting the Bulldogs defense before Flynn connected with Doucet for the first passing touchdown of the season.

Henig was intercepted for the fifth time, this time by Steltz who returned 49 yards to the Mississippi State 8-yard line. Two plays later, Flynn dumped a short pass to running back Charles Scott who turned and ran 11 yards for his first career receiving touchdown.

Henig’s sixth interception again landed in Steltz’ grasp, as the LSU senior returned 51 yards to the Mississippi State 45. Steltz became the seventh player in LSU history to record three interceptions in a game, the first since Corey Webster versus Florida in 2002.

With 8:20 to play, Perrilloux ended a nine-play drive with a 3-yard touchdown.

Later in the fourth quarter, LSU scored for the last time after a State fumble. Perrilloux found LaFell in the left corner of the endzone for a 45-0 lead with 5:45 to play.

The Tigers travelled to face a league opponent to open the season for only the fourth time in school history, picking up their first win in the situation (1-2-1).

Attendance on the steamy evening was 50,112.

LSU returns home via charter flight from Golden Triangle Airport immediately after the game. The Tigers will open the home schedule against ninth-ranked Virginia Tech on Saturday, Sept. 8, in Tiger Stadium.

Kickoff for the nationally televised game will be 8:15 p.m.