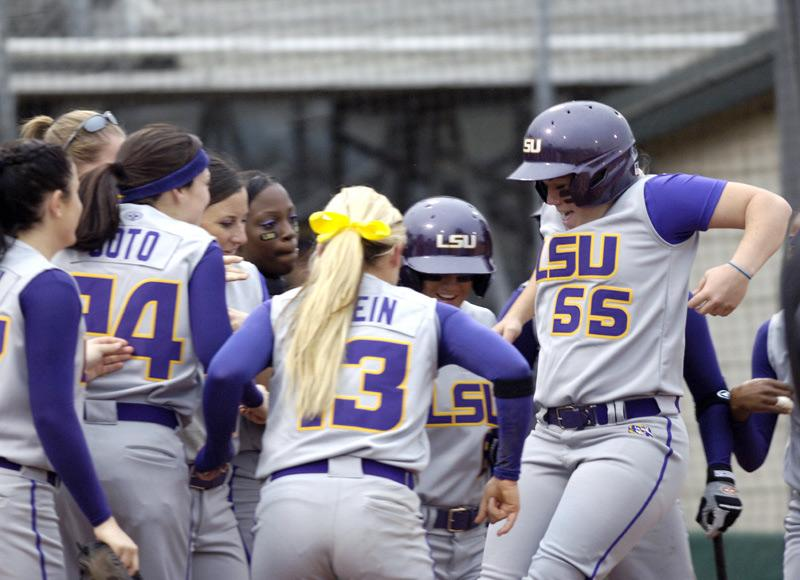 With the wins, the Tigers improved to 2-0 on the season and 2-0 in tournament play. LSU will continue Tiger Classic play on Saturday against Missouri at 1:30 p.m., before taking on Centenary at 3:45 p.m.

“Not exactly what I expected out there today,” said LSU head coach Yvette Girouard. “It was very sloppy with fly balls dropped and the pitchers out of sync a little bit. Luckily we hit the long ball and that probably won the games for us. We’ll have to do much, much better tomorrow. It was a sloppy performance tonight.”

In her second collegiate at-bat, Mitchell smashed a two-run home run to right center field in the second inning against Memphis. The LaPorte, Texas, native finished 2-for-3 for the game with two RBIs. She came back against Middle Tennessee and went 1-for-4 with a walk.

In addition to Mitchell’s home run that proved to be the game-winner against Memphis, Quinlan Duhon and Vanessa Soto each recorded their first home runs of the season, both against the Blue Raiders of Middle Tennessee. Soto gave the Tigers the early lead with a three-run round tripper in the bottom of the first inning. Duhon led off the bottom of the fourth with her homer.

“Rachel Mitchell had a great breaking out. When Jazz Jackson got her shot she jumped up and took it. The pitchers struggled early but found their groove. I thought Quinlan Duhon hit the ball as hard as she could possibly hit it. She had a perfect day as far as hitting the ball, but sometimes it just doesn’t have eyes. We’ve got to do much better tomorrow and I know that we will.”

In addition to Mitchell’s performance, senior All-American Leslie Klein went 2-for-4 with a stolen base and junior Tayl’r Hollis went 1-for-3 with a pair of runs scored.  The Tigers pulled ahead early with one in the first and two more in the third. Memphis came back to score its lone run in the fifth.

Hollis led off the game with a single through the left side. She moved to second on a sacrifice bunt by Mitchell. With two outs, a throwing error by Heather Mott allowed Hollis to come around to score for the 1-0 advantage.

In the top of the third, Hollis drew a one out walk. Mitchell then slammed her first collegiate home run over the right center field fence to improve LSU’s lead to 3-0.

Lindsey Pridgeon, who went 2-for-3 in the game, led off the bottom of the fifth with a single up the middle. She moved to third on back-to-back sacrifice bunts. With runners on the corners after a walk by Leila Dolfo, Mott hit an RBI single through the left side that scored Pridgon. Memphis had only one baserunner the remainder of the game, with that coming on a two-out throwing error.

In the nightcap against Middle Tennessee State, the Blue Raiders took the early lead on an RBI double by Muriel Ledbetter in the top of the first inning. The Tigers responded with a three-run home run by Soto in the bottom half of the inning. Duhon’s home run added the fourth run with her leadoff homer in the bottom of the fourth.

LSU put up one more in the bottom of the fifth on an RBI single by Soto that scored Mitchell. The Tigers closed out their scoring in the sixth. Andrea Smith scored from third on a fielding error on a hit by Mitchell. In the top of the seventh, Middle Tennessee used a fielding error by LSU to tack on its only other run of the game.

Sophomore Dani Hofer earned the win for LSU to improve to 1-0 on the year. She allowed two runs, only one of which was earned, on four hits with three walks and 11 strikeouts in the complete game effort. Samantha Floyd started and took the loss for Middle Tennessee State. She allowed four runs on two hits with three walks in three innings. Lindsey Vander Lugt closed it out for the Blue Raiders, allowing two unearned runs on five hits with two strikeouts in the final three innings.

Action begins on Saturday with Middle Tennessee State taking on Centenary at 9 p.m., followed by Missouri against Memphis. Following the two Tiger games, Memphis will face Middle Tennessee at 6 p.m. The day concludes with the fourth-seed playoff game at 8:15 p.m. if necessary.

Championship bracket play begins on Sunday with the second seed taking on the third seed at 9:30 a.m. The tournament’s top seed will face the fourth seed at 11:45 a.m. for the right to advance to the championship game at 2 p.m.

BATON ROUGE — A three-run Memphis third inning broke open a 1-1 tie and proved to be the difference maker in the Tigers’ season-opening 4-2 win over Centenary in game one of the Easton Tiger Classic on Friday.

Sophomore right fielder Leila Dolfo led off the top of the third inning with a double to center field, and advanced to third when Heather Mott singled through the left side. Bridgette McNulty singled to score Dolfo and move Mott to third, before Kimberly Hayden brought Mott home on a double to left field. Kara Ross added the final run of the inning on a sacrifice fly to left to score McNulty from third.

Centenary opened the scoring in the bottom of the first inning when Hayley Bassett scored from third while Micah Rhodes attempted to steal second. Memphis tied the game in the top of the next frame on an RBI double to right field by Lindsey Pridgen that scored Brittany Gooch from first.

The Ladies added one more run in the bottom of the sixth inning when Emerald Doria scored on a fielder’s choice, but were unable to add any more as Johnson got the side out in order in the seventh.

BATON ROUGE — A low-scoring encounter between Missouri and Centenary was broken wide open late when the Tigers exploded for six runs in the sixth inning en route to an 8-1 win over the Ladies on Friday afternoon in game two of the Easton Tiger Classic.

Freshman hurler Alana Jacobson (1-0) pitched just the fourth and fifth innings for Missouri (1-0), struck out three and gave up Centenary’s sole run, but did enough to earn her first collegiate win. Ryan Thacker (0-1) started strong in the circle for the Ladies (0-1), but did not make it out of the sixth inning and was handed the loss, despite giving up just three earned runs.

With two out in the bottom of the sixth inning, right fielder Sara Simons lined an RBI double to right field to score Amy Henke for the first of Missouri’s six runs in the frame. The next batter up, Alli Kennewell, was walked, and when Kathy Masterson was hit by the very next pitch the bases were loaded with Tigers.

Kelsey Greeson, who had replaced Thacker in the circle following the second out of the inning, walked Andee Allen to let Simons stroll home from third, before throwing a wild pitch that advanced all baserunners and let Michaele Vock, pinch-running for Kennewell, score.

Leanne Bowers knocked two more runners in with a single to left center that proved to be Greeson’s last pitch of the afternoon, before she made her own way across home plate on a throwing error by Centenary shortstop Emerald Doria later in the inning.

Centenary opened the scoring in the top of the fourth inning when catcher Haley Bassett scored from third on a wild pitch by Jacobson. The Tigers tied the game up in the bottom of the frame when Jen Bruck hit a sacrifice fly to right field to score Micaela Minner, and took the lead for the first time in the bottom of the fifth on the back of an RBI double by Allen that brought Masterson home from second.

BATON ROUGE ? The Missouri Tiger scored four runs in the top of the third inning and survived a late rally by Middle Tennessee State to close out the first day of the Easton Tiger Classic with an 8-3 win over the Blue Raiders.

Jen Bruck (1-0) started the game in the circle for Missouri (2-0) and threw three scoreless innings, striking out one and only giving up three hits while picking up her first win of the season. Lindsey Vander Lugt (0-1) took the loss in her first start of the season as Middle Tennessee fell to 0-2.

Missouri already held a 2-0 lead when Andee Allen led off the top of the third with a single up the middle, and by the time the frame was over the Tigers had a commanding 6-0 edge. Leanne Bowers followed Allen’s single with one of her own, and the bases were loaded shortly thereafter when Sara Simons reached based safely following a throwing error by Blue Raider third baseman Melissa Weiland.

Micaela Minner singled through the left side to score Allen, which led to Vander Lugt being replaced in the circle by Amy Candioto. The pitching change did not change Middle Tennessee’s fortune, however, as Candioto promptly threw a wild pitch that scored Bowers. Candioto redeemed herself momentarily by striking Amanda Renth out but the reprieve was short lived as Kathy Masterson followed up with a double to left field that scored Minner and Simons for the Tigers’ fifth and sixth runs.

Middle Tennessee got one back in the bottom of the inning on an RBI double by Shelby Steiner, but Missouri pulled ahead even further, adding runs to its total in the fourth and sixth innings. Muriel Ledbetter offered the Blue Raiders a glimpse of hope in the bottom of the sixth inning when she led off with a home run, but Middle Tennessee State was unable to do any substantial damage to lead on a Justine Cerna RBI single.