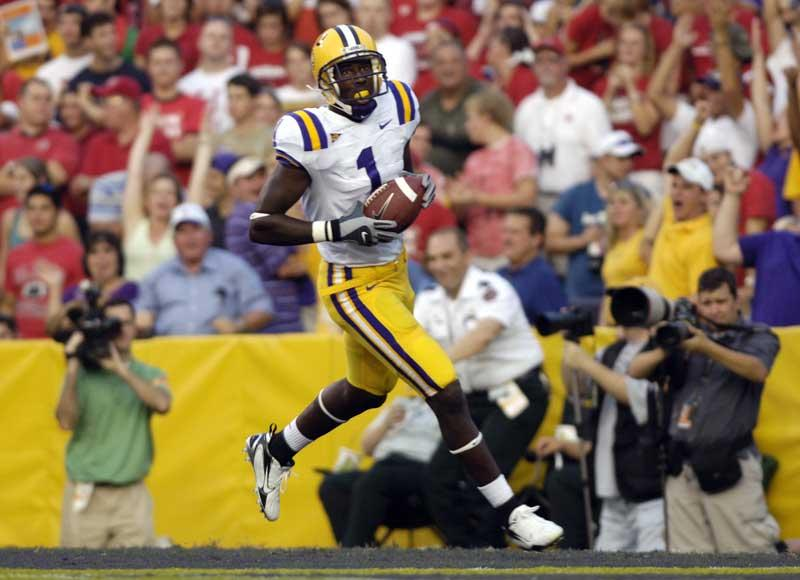 by Chris Macaluso
Special to LSUsports.net

BATON ROUGE — Saturday’s season-opener between LSU and UL-Lafayette became one-sided less than 5:00 into the contest when LSU scored on the third play of its first possession.

One sided quickly turned lopsided as the homestanding Tigers scored six more times on their way to a 45-3 of across-the-bridge rivals UL-Lafayette before a crowd of 92,362 in Tiger Stadium.

LSU starting quarterback JaMarcus Russell showed little of the rust expected from a player coming off an injury from last season and playing in the first game of the season. He completed 13-of-17 passes for 253 yards and three touchdowns before giving way to back-up quarterback Matt Flynn in the third quarter.

In all, the Tigers amassed 469 yards of offense despite struggling for just 22 yards on the ground in the first half. LSU eventually finished with 170 yards rushing thanks largely to the return of junior tailback Alley Broussard who missed last season with a knee injury.

ULL’s Tyrell Fenroy was the game’s leading rusher with 52 yards. His team managed 113 yards on the ground overall.  Ragin’ Cajun quarterback Jerry Babb was harassed most of the night by LSU’s defensive front and struggled to complete 7-of-17 passes for just 63 yards and two interceptions, the first of which was returned for a touchdown early in the game. He was sacked three times.

“Our football team did some good things,” said LSU Coach Les Miles. “We have to run the football better in the first half. I felt like we got on track the second half.”

UL-Lafayette claimed the opening possession at its 14-yard line and punted to LSU three plays and two yards later. LSU responded to ULL’s offensive inability by scoring three plays later when Russell flicked a 58-yard touchdown pass to Brandon LaFell who was five yards beyond the defense inside the ULL 15-yard line. The long touchdown capped a short drive that consumed just 1:23 and gave the Tigers a 7-0 lead with 11:30 remaining in the first quarter.

LSU scored again before the crowd stopped buzzing about the first touchdown when corner back Jonathan Zenon intercepted a wobbling pass from Babb at the ULL 21 and returned it into the south endzone with 9:46 left in the quarter to stake LSU to a 14-0 lead.

ULL’s first scoring chance was wasted with 4:35 to play in the first quarter when Drew Edmiston missed a 35-yard field goal try at the end of a productive and time-consuming 11-play, 52-yard drive. Edmiston redeemed himself with 11:26 to play in the second quarter and cut the LSU lead to 14-3 by kicking straight a 41-yard attempt created by a muffed punt by LSU’s Chevis Jackson at the ULL 26.

LSU’s next score lacked the flair of the first two but gave the rest of the offense a chance to touch the ball as Russell completed 4-5 passes to four different receivers, the last being Early Doucet for a 16-yard touchdown. The eight-play, 82-yard drive ate up 4:08 and gave LSU a 21-3 lead after the Colt David point after.

The Tigers scored again with 54 seconds to play in the half when Russell found Dwayne Bowe open in the back of the north endzone on the seventh play of a 70-yard drive that featured 29 and 20-yard catches by Craig Davis. David’s point after gave the Tigers a 28-3 lead at the half.

The lead grew to 35-3 on the first possession of the second half as the Tigers methodically marched 73 yards in 10 plays for their fifth touchdown. Tailback or fullback Jacob Hester ended the drive with a 2-yard push into the endzone, ending the 5:18 drive with 9:29 to play in the third quarter.

It grew again early in the fourth quarter when Russell was replaced with Matt Flynn and Broussard touched the ball for the first time. Broussard ran for 19 yards on the drives first play and seven yards on its last to cap a 14-play drive that gave LSU a 42-3 lead with 11:59 to play in the game.

Flynn led the Tigers on another long drive later in the quarter that resulted in a 33-yard field goal by Ryan Gaudet with 4:01 remaining for the final score.

“Opening wins are key,” Miles said. “We have to be better than we were. There were a lot of good things and things that need improvement. I look forward to week two.”