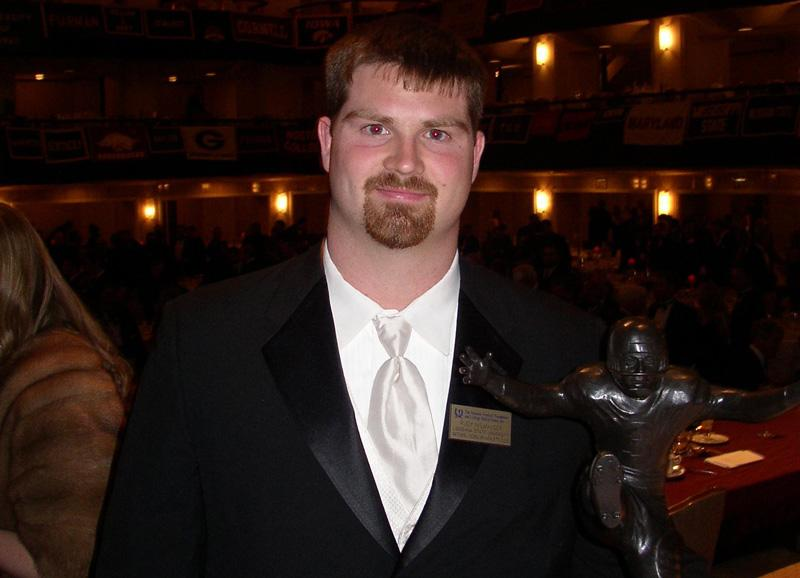 Known in many circles as the “Academic” Heisman, the Draddy Trophy continues to be one of college football’s most sought after and competitive awards, recognizing an individual as the absolute best in the country for his combined academic success, football performance and exemplary community leadership. The award comes with a stunning 24-inch, 25-pound bronze trophy and a $25,000 postgraduate scholarship. A total of $300,000 was awarded to Niswanger and the other 15 Draddy Trophy Finalists, who each claimed $18,000 scholarships.

“This is a tremendous honor and I am very proud to accept this outstanding award,” Niswanger said. “I want to thank the faculty and staff at LSU as well as the National Football Foundation & College Hall of Fame for this great honor.”

Niswanger, who started 11 of LSU’s 12 games this season at center, anchored the LSU offensive line for three seasons, guiding them to the 2003 National Championship and the 2005 SEC Championship game.

Niswanger, a 2005 team captain, his many community activities include the SEC Student-Athlete Advisory Committee, the Cub Scouts and Boy Scouts, the Campus Crusade for Christ, the LSU player outreach program and volunteering to at LSU campus shelters for victims of hurricanes Katrina and Rita.

“I am so proud of Rudy,” LSU head coach Les Miles said. “He combines all of the outstanding qualities of a student-athlete with all of the strengths that this award represents. His work in the classroom, on the football field, and in the community, makes him truly deserving of the honor. He represents the best that college football has to offer and he is an outstanding representative of not only our football team, but LSU and the state of the Louisiana.”

Launched in 1959, the NFF scholar-athlete program became the first initiative in history to credit a player for both academic and athletic accomplishments. The centerpiece to the NFF’s scholar-athlete program, which has awarded $8 million to 660 top athletes, the Draddy Trophy, first awarded in 1990, honors Manhattan College Quarterback and former NFF Chairman Vincent dePaul Draddy.

“We are proud to bestow this honor on Rudy Niswanger,” said NFF President Steven J. Hatchell. “He represents an unbelievable group. We had 184 of the greatest candidates ever nominated. Rudy joins an elite group of past recipients who serve the perfect role models for all young players to emulate.”

Candidates must be a senior or graduate student in their final year of eligibility, have a grade point average of at least 3.0 on a 4.0 scale, have outstanding football ability as a first team player and have demonstrated strong leadership and citizenship. Niswanger edged out 15 other National Scholar-Athlete Award Winners, who all took home $18,000 scholarships.

The Draddy Trophy caps a week in which Niswanger, a native of Monroe, La., was also presented with the Wuerffel Trophy and then a day later, was named to the ESPN the Magazine First-Team Academic All-America squad.

In alphabetical order, the 2005 Draddy Finalists and National Scholar-Athlete Award Winners are:

Listed in chronological order, past Draddy winners, including two Rhodes Scholars, a Rhodes Scholar finalist, a Heisman winner are: