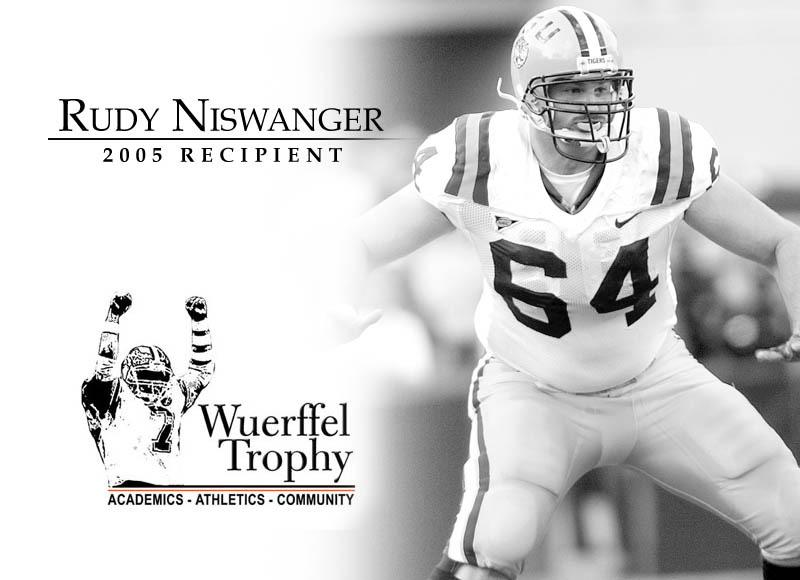 BATON ROUGE — LSU senior center Rudy Niswanger picked up another national award Thursday when the All Sports Association of Ft. Walton Beach, Fla., named him the inaugural recipient of the Wuerffel Trophy, also known as the “Humanitarian Heisman.”

“There are so many things that the Wuerffel Award stands for on the field, off the field and the type of person he is,” head coach Les Miles said of the achievement. “We have a great senior, and I just could not be happier with the fact that he is the recipient of this award.”

The award, named after 1996 Heisman Trophy winner Danny Wuerffel of Florida, is awarded to the college football player who best combines exemplary community service with outstanding academic and athletic achievement.

Niswanger, who has served as a starter on the Tigers’ offensive line for three seasons, helped lead LSU to two Southeastern Conference Championships and the 2003 BCS National Championship.  He graduated in May with a 4.0 grade point average in kinesiology with an emphasis on pre-medicine and has already been accepted to LSU Medical School in Shreveport for when he completes his football career.

Next week, Niswanger will attend the National Football Foundation Hall of Fame Banquet in New York City where he is one of 15 finalists for the Draddy Award, an honor that goes to college football’s top student-athlete.

On top of his academic and athletic contributions, the Monroe, La., native also speaks regularly at youth group and church functions in the Baton Rouge community. During the recent devastation of Hurricane Katrina, Niswanger, along with many of his teammates, also volunteered to help at shelters on the LSU campus.

“There are a lot of people that do great things in their community, there are other people who are great football players, and there are a lot of people that are great students, but it’s rare that you find all of those in one person,” Danny Wuerffel said in describing the winner of the award bearing his name. “I was impressed by the way he served during the hurricane and was able to help do some good. All his organizations on campus and the church he is involved with, all of those things were very impressive.”

Niswanger was chosen from a group of 13 finalists from schools across the nation and will receive his award in a formal ceremony by the All Sports Association in Fort Walton Beach, Fla., on Feb. 17.