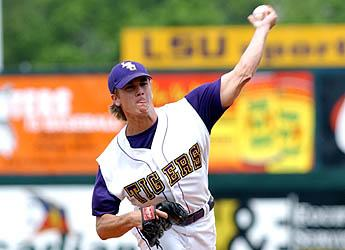 STARKVILLE, Miss. — The ninth-ranked LSU baseball team wrapped up a share of the Southeastern Conference Western Division title and the No. 2 seed in the SEC Tournament on Sunday, holding on for? a 3-2 victory over Mississippi State in the regular-season finale at Dudy Noble Field.

The Tigers (38-18, 18-12) closed out the regular season with their sixth straight series win and finished with victories in 13 of their last 17 league games. LSU shares the division title with Ole Miss, who also ended the regular season with an 18-12 league record. The Tigers claimed the tie-breaker and the No. 2 seed by taking two of three from the Rebels earlier in the season.

Despite the loss, the Bulldogs (36-20, 13-16) managed to qualify for the tournament as the No. 7 seed with losses by Vanderbilt and Arkansas on Sunday.

LSU and Mississippi State will meet in Game 1 of the SEC Tournament at 10 a.m. on Wednesday from the Hoover Met in Birmingham, Ala. Third-seeded Tennessee will face the No. 6 seed South Carolina in Game 2 at 1 p.m. The winners of those games will meet at 5 p.m. on Thursday, while the losers will look to keep their tournament hopes alive at 10 a.m. on Thursday.

Shortstop Derek Hebert provided game-winning hits in both of the Tigers’ victories this weekend. Hebert belted a sixth-inning, solo homer on Sunday to give LSU a 3-2 lead it would not relinquish. Second baseman Clay Harris drove in the other two runs with a pair of singles, while Bruce Sprowl accounted for two runs on a 2-for-5 day.

Junior Greg Smith (10-2) turned in a valiant effort on a muggy day, pitching into the seventh and scattering eight hits. Smith allowed just two runs, walked one and struck out four in 6.1 innings of work.

Left-hander Jason Determann, who earned the win on Friday night, was brilliant in 2.2 scoreless innings of relief. The junior struck out four en route to his seventh save of the season.

LSU had a chance to break the game open in the third. Three consecutive singles to start the frame, including one by leadoff hitter Bruce Sprowl, loaded the bases with no outs. Crosby minimized the damage by retiring the next three batters on fly balls, but not before Clay Harris delivered a sacrifice fly to score Sprowl.

The Bulldogs responded with a run in the bottom of the third. Brian LaNinfa and Michael Rutledge, the bottom two hitters in the order, each delivered a single. Two batters later, Ed Easley knotted the game with a fielder’s choice groundball.

LSU put the leadoff man on for the fourth straight inning in the fifth. Sprowl beat out an infield single and came into score on Harris’ two-out single through the left side.

With the Tigers clinging to a 2-1 lead, Rutledge answered the run in the home half of the fifth, drilling a one-out solo homer just over the left field wall. It was the first homer by Rutledge in his career and the first by Mississippi State on the weekend.

Through 23.1 innings, LSU had managed only one homer courtesy of Sprowl’s leadoff shot to open Saturday’s game. Hebert added to the tally in the sixth, crushing his third homer of the season into the right field bleachers to regain the lead and chase Crosby from the game.

After? the Rutledge homer, Smith retired the next six batters into the seventh inning. Joseph McCaskill put the pressure on the southpaw with a one-out double in between outfielders Sprowl and Nick Stavinoha. Tiring and well over the 100-pitch mark, Smith issued a walk to LaNinfa, which ended his day.

Jason Determann inherited the jam and allowed both runners to move into scoring position on a wild pitch that ricocheted into the dugout. The threat was over after Patterson made a brilliant diving catch on Rutledge’s fly ball, followed by a Determann strikeout of Jeffrey Rea.

Determann struck out the side and escaped drama in the ninth after allowing the tying and winning runs to reach base on a pair of singles.