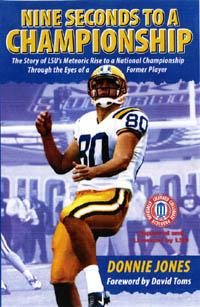 BATON ROUGE — Former LSU punter Donnie Jones has turned author as the four-year starter has penned a 100-page book titled “Nine Seconds To A Championship”, which recounts his career with the Tigers.

Jones, a Baton Rouge native, was drafted in the seventh round of the 2004 NFL Draft by the Seattle Seahawks after capping his LSU career with the Tigers in January. Jones will long be remembered for delivering the punt that ended LSU’s 21-14 win over Oklahoma in the Sugar Bowl, a victory that sent the Tigers to the school’s first national title in football in 45 years.

“Nine Seconds To A Championship” recaps Jones’ five years with the Tigers, a span that saw him play for two coaches (Gerry DiNardo and Nick Saban), while also being a part of four bowl teams, two SEC Championship squads as well as the 2003 BCS National title.

The book, which will retail for $9.95 plus tax, takes the reader through the trials and tribulations of a team that won only three games in Jones’ first year with the Tigers in 1999 to the 2003 championship season, and the four-year process of getting there.

David Toms, one of the World’s top professional golfers and winner of the 2001 PGA Championship and LSU alum, wrote the foreword for the book.

Complete with action photos and candid shots of his five years with the Tigers, “Nine Seconds To A Championship” will be available to the public starting on Friday, July 23 at retail outlets throughout the Baton Rouge area.

In addition, the book will be available in the coming weeks on the Internet at www.LSUsports.net. For more information on Donnie Jones and the book, visit www.donniejones.org.