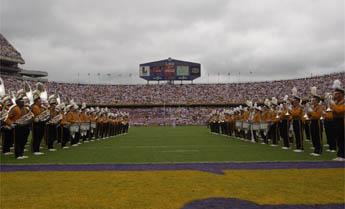 BATON ROUGE — The LSU versus Virginia Tech football game that was scheduled for the 2004 season opener has been moved to 2007.

The move was necessitated when ESPN and Virginia Tech were unable to reach agreement to schedule a Black Coaches Association Classic game for Virginia Tech in 2004.

In 2002, when LSU traveled to Virginia Tech, the Tigers were able to play seven home games because the NCAA allowed an additional game on the schedule in that particular year. In 2004, the NCAA will allow teams to play only 11 games, which means Virginia Tech would have had only six home games if it played at Baton Rouge. But ESPN had agreed to schedule a Black Coaches Association Classic game for the Hokies, which by NCAA rules can be played in addition to the 11-game schedule.

Virginia Tech could have executed the $250,000 buyout in the contract, but instead a move to 2007 was negotiated. After it was clear that Virginia Tech could not play LSU in 2004, the next available playing date for both schools was the 2007 season.

As part of the arrangement to play in 2007, Virginia Tech has agreed to an elevated buyout clause of $350,000.

“We’ve worked closely with Virginia Tech to ensure that we bring their team to Tiger Stadium as a return visit to LSU’s appearance in Blacksburg last season,” said senior associate athletics director Dan Radakovich, who coordinates football scheduling for the Tigers. “Unfortunately, it’s the nature of our business that scheduling adjustments are made. We look forward to having the Hokies here in 2007.”

“Moving and rescheduling games has become more commonplace in college football,” said Mark Womack, executive associate commissioner of the Southeastern Conference, who coordinates television negotiations for the league office. “LSU did everything it could to keep this game in 2004, and they did a good job keeping Virginia Tech on its schedule by moving it to 2007.”

Radakovich said the search for a new opponent for the 2004 season opener will begin immediately.