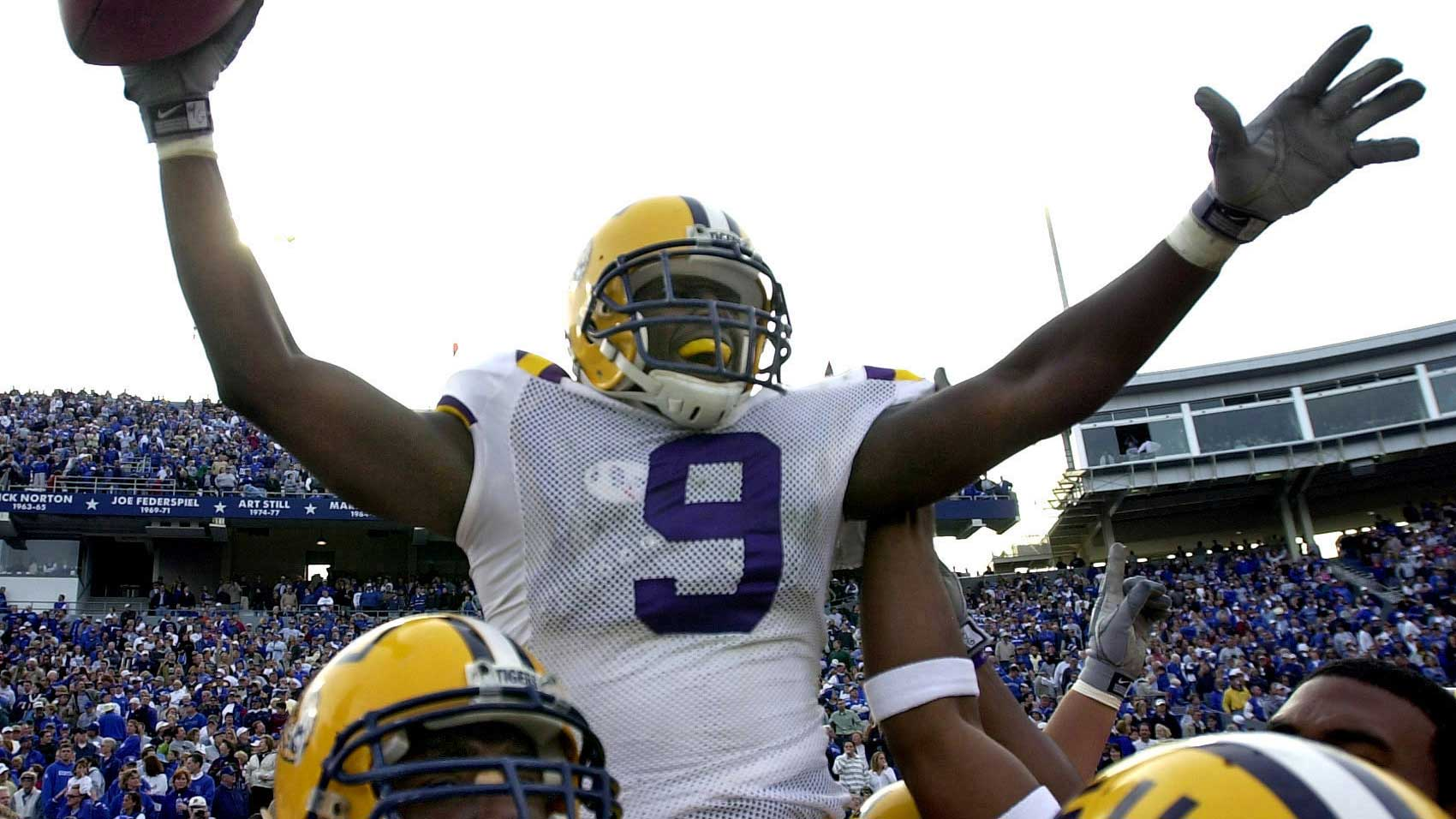 LEXINGTON, Ky. — With two seconds remaining in the game and 2,000 Kentucky fans on the field ready to tear down the goal posts, Marcus Randall’s Hail Mary was answered when two Wildcats tipped a ball at the LSU 25-yard line and Devery Henderson came up with a one-handed reception at the 15 for a 75-yard touchdown as time expired. LSU staved off a 16-point fourth-quarter rally by Kentucky to win, 33-30, on a windy Saturday in Commonwealth Stadium.

Kentucky placekicker Taylor Begley had hit a 29-yard field goal with 11 seconds remaining in the game after Jared Lorenzen connected with Aaron Boone for three touchdowns to lead the Wildcats from 14 points back to a 30-27 lead.

LSU (7-2, 4-1 SEC) ran one play to its own 25 before Randall reached back and threw the ball 65 yards in the air. The ball was tipped by Kentucky into a striding Henderson’s hand at the 15. He strolled through two defenders arms and into the endzone to stun an already celebratory Kentucky crowd.

Kentucky (6-4, 2-4 SEC) had doused head coach Guy Morris with the a cooler full of water before the heroics commenced.

The football gods shined on Henderson and Randall on this cloudy day, as the two connected three times for touchdowns of 70, 30 and 75 yards. Henderson caught five passes for 201 yards, while Randall was 10-of-23 for 264 yards and three touchdowns without an interception.

LSU outrushed the Wildcats, 213-154, as Joseph Addai rolled up 91 yards on nine carries including a 63-yard touchdown run. Domanick Davis had 76 yards, while Randall had 36.

In the first half, the Tigers opened the game trying to control the game with its rushing attack, gaining 101 yards on 22 carries in the half. However, they were forced to go to the air when Lorenzen connected with Boone for a 43-yard TD strike late in the first quarter.

Kentucky won the toss and elected to defer to the second half, giving LSU the ball going into a strong wind to start the game.

On the Tigers’ second possession, Donnie Jones was forced to punt from the LSU 13 after the Tigers went three-and-out. Jones punt spiraled over the head of All-SEC punt returner and down to the 2-yard line for a school-record 86-yard punt. It was also the sixth-longest in school history and broke Ray Coates 76-yard punt against Rice on Oct. 7, 1944.

Despite Jones’ record-setting effort, Kentucky was able to get out of the shadow of his own endzone with a third-down conversion from its 5. The Wildcats drove past midfield on an 18-yard reception by Artose Pinner, and, on the next play, scored their first touchdown on a 43-yard pass to Aaron Boone. Kentucky led 7-0 with just more than six minutes to play.

LSU responded offensively, pushing the ball into Kentucky territory with the help of a personal foul nearing the end of the first quarter. However, the drive stalled at the Kentucky 28 and a 45-yard John Corbello field goal was blocked with 19 seconds to play in the quarter.

After the Tigers figured Lorenzen and the Wildcats’ offense, they used the speed of Henderson on a shuffle pass to get past the defensive line and beyond a stunned secondary for a 70-yard touchdown to tie the game at 7-7. The gain was the longest by the Tigers this season and the fifth of the season for Henderson.

Two possessions later, the Tigers continued to use Henderson’s speed to stymie the Wildcat defense. Henderson had a 23-yard reception down to the Kentucky 30-yard line to set up his 30-yard touchdown reception two plays later. The NCAA Track & Field Champion reached through two defenders to pull down his second TD of the game with 5 seconds to play in the half for a 14-7 lead.

To open the second half, the Wildcats were backed up to their 9-yard line after being flagged for an illegal block on the kickoff return. Kentucky only advanced three yards on the drive and was forced to punt the ball.

After a 7-yard return by Davis, Addai took the handoff from Randall, ran around the left side and cut back against the grain for a 63-yard touchdown run to stun the Kentucky crowd. LSU led 21-7 only 1:43 into the half.

Kentucky blocked its second kick of the game with five minutes to play in the third quarter, this time a Jones punt at the LSU 8. Three plays later, Lorenzen found tight end Chase Harp for a 3-yard touchdown in the left corner of the endzone. LSU led 21-14, with 3:43 on the third-quarter clock.

The Tigers responded with a 10-play, 32-yard drive that included a pair of third-down conversions and took more than four minutes off the clock. Corbello tied a career high with a 49-yard field goal to put the Tigers up 24-14 just inside the fourth quarter.

With 10 minutes to play in the game, Kentucky pulled within four, 24-20, when Lorenzen hooked up with Boone in the endzone for a second time. The 25-yard touchdown strike was followed by a botched snap and a missed point-after conversion.

LSU took advantage the missed point after on the next possession, as Derek Abney muffed a punt with eight minutes to play and LSU scored a 19-yard field goal with 6:02 on the clock for a seven-point lead, 27-20.

The Tigers needed all seven of these points, as Kentucky tied the game at 27-27 with 2:24 to play on a 44-yard touchdown strike from Lorenzen to Boone once again. The score was set up by two pass interference calls and a face mask against the Tigers.

On the ensuing possession, Randall escaped from his endzone with just over a minute to play and the Tigers were forced to punt from deep in their own territory.

The punt was returned by Abney to the LSU 31, setting up what seemed to be the Wildcats’ game-winning field goal.

The rest was what will be forever remembered as the one that got away in the Bluegrass State.