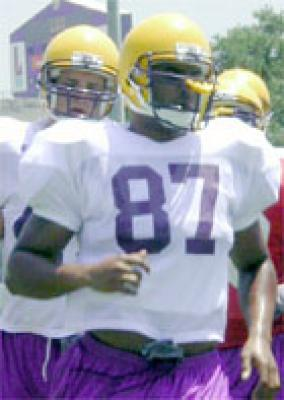 LSU has got some tight ends. Big. Strong. Talented. A whole bunch of them.

“Well, the first thing I told our guys is I’ve read ever since I’ve been here about how good our tight ends are, but when you look at the production, I haven’t seen it,” Dooley said.

Last year, as far as catching the football, the numbers were anything but impressive.

Robert Royal, a 6-foot-5, 240 pounds senior from New Orleans, led the Tigers tight ends with 19 catches for 143 yards and a touchdown. Joe Domingeaux, the 6-5, 266-pound junior from Crowley, had seven receptions for 62 yards. And Kyle Kipps, the 6-4, 261-pound junior from Lafayette who is now considered more of a defensive lineman, had three grabs, one for a TD.

In their defense, LSU in the recent past has used its tight ends primarily for blocking. This year the Tigers are expected to throw considerably more to the big guys.

“We’ve been working really hard to get the tight ends involved,” Dooley said. “If you’ve got a tight end who can do it all, it puts the defense in a bind.”

That’s what the tight ends hope.

“I just plan on doing what I’ve done at LSU,” Royal said. “Nothing spectacular, just going out there every day and doing my little duties, blocking, catching the ball, doing whatever I have to do for this team to win.”

“I would say right now Robert Royal is the leader of the group and one of the leaders on offense,” Dooley said. “He’s worked as hard as any player any of our coaches have ever seen in the offseason. He works every day in practice with a positive attitude. We’re counting on him to be very productive.”

Domingeaux, hampered by injuries (knee surgery in 1998, Achilles’ surgery earlier this year) “has the build of the protype tight end,” Dooley said. “But it takes more than body type to be a good tight end. He’s got to get well, and they tell me he’s as good a condition as he’s been, but he’s got to get back that nastiness of sticking your hat in there and wanting to become a dominant player.”

Talk about the prototype, big redshirt-freshman Eric Edwards (6-6, 248) from Monroe, also figures to be in the mix along with sophomore Solomon Lee, who has been slowed by a late spring knee injury.

“He’s got very good hands, he’s becoming a better route runner and he’s going to be a very good player for us,” Dooley said. “He’s going to help us a lot this year, but still has a lot of developing to do.”

And, in case of injuries, Kipps will always be ready to leave the defensive line to fill in.

“I’m not used to all the running we’re doing in practice, but I’m excited we’re more involved in the offense,” Domingeaux said.

Edwards is a former Parade All-American for Ouachita Christian who can’t wait to play in a game after redshirting last season.

LSU fans hope he gets to do that a lot this season.

“I feel good about where we’re headed,” Dooley said, “but we have a lot more to do to get better.”