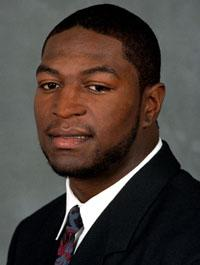 CAREER
Played in 39 games with 14 starts … Started all 14 games at linebacker in 2003, ranking fourth on team with 65 tackles … Registered a total of 77 tackles during career … Played first three seasons at a special teams contributor … Moved from safety to linebacker prior to senior season.

SENIOR SEASON (2003)
Emerged as one of LSU’s top linebackers in 2003 after spending his first four seasons with the Tigers as a special teams standout … Is one of two former safeties that made the move to linebacker for LSU in 2003 (Adrian Mayes is the other) … Gives the Tigers a player with outstanding speed on the edge … Physical specimen that also possesses good wheels for covering running backs out of the backfield … Played and started in all 14 games for the Tigers, registering 65 tackles and 5 sacks … Had 9 tackles that accounted for 34-yards in losses … Returned a fumble 25-yards for a first quarter TD in final game in Tiger Stadium against Arkansas … Led LSU with 6 tackles, including 1.5 sacks, in win over Georgia in SEC Championship Game … Had a sack for a 14-yard loss vs. Auburn … Recorded two tackles for losses in road win over South Carolina … Capped career with 8 tackles, including one for a 1-yard loss vs. Oklahoma in the national championship game.

SOPHOMORE SEASON (2001)
Key member of LSU’s special teams … Played in seven regular season games as well as the Sugar Bowl … Recorded four tackles … Had two tackles in season opener vs. Tulane and one each against Mississippi State and Ole Miss.

FRESHMAN SEASON (2000)
Played in five games for the Tigers as a true freshman … Recorded three tackles, including one for a loss … Saw action against Western Carolina, Houston, Auburn, UAB and Kentucky … Played in both the defensive secondary as well as special teams.

HIGH SCHOOL
Two-time member of the Port Arthur News Super team … Honorable mention All-State as well as being selected to the All-Metro squad as both a safety and running back … Rushed for 1,782 yards and 21 touchdowns as a senior … Also played some quarterback as a senior completing four passes for 151 yards … Rushed for 696 yards and two touchdowns as a junior … Ran a 4.5 40 in high school … Member of the National Honor Society and also participated in Texas Boys State … Earned letter in football, basketball, baseball and track … Coached in high school by George Thompson.