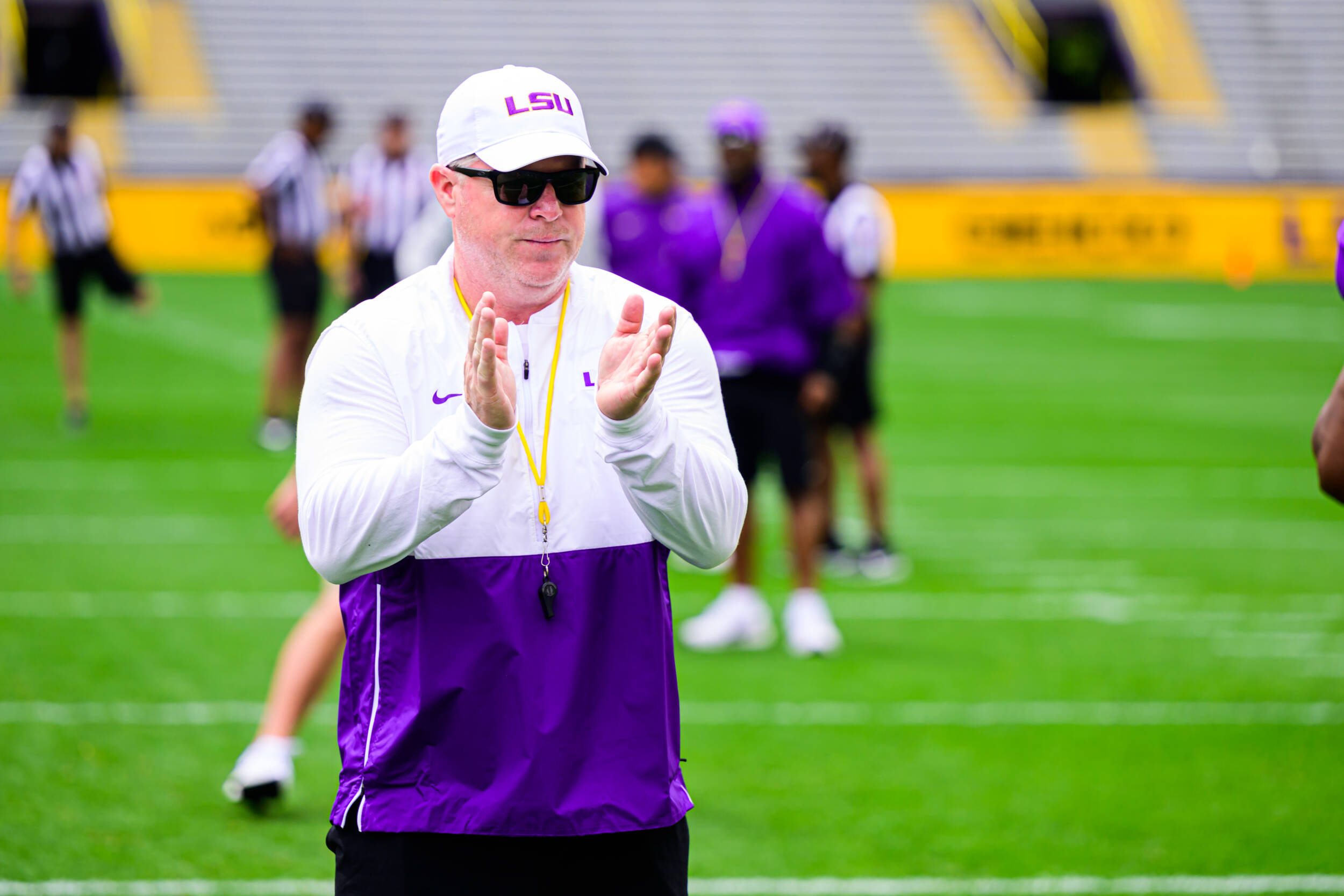 Emily Dixon: Welcome to LSU. You started to get acclimated to Baton Rouge a little quicker than some of the other coaches by engaging with fans through social media to find all the fun spots to get to, even taking in other sporting events on campus. How’s the transition been for you making the move to LSU?

Brian Polian: It’s been wonderful. The entire community has been incredibly welcoming. The fanbase has been engaged and fun. We reached out and sought help and said, “Okay, where do we go? What do we do?” The response was overwhelming. We’re slowly checking boxes off that list and enjoying what the community has to offer. When my family comes down here, whenever we make a transition, we make that transition wholeheartedly. We want to indoctrinate ourselves into Louisiana culture, into Baton Rouge culture and into LSU culture.

ED: You’ve coached with Brian Kelly for many years, so how would you describe the program he wants to build here at LSU?

ED: What’s your approach when it comes to building a relationship with a completely new group of players on the field?

BP: The first challenge is to get to know who they are specifically and, for other coaches who have smaller position groups, that happens a little faster. I’m interacting with probably 85% of the team. I told them the first day I’m going to get your name wrong. You’ve got to correct me and I’m going to get it right quickly. But I’m literally studying face sheets and biographies. Then it is whenever I get the opportunity, whether it be in the weight room, on the field and pre-practice, up in the office – grab a guy and say, “Hey, just come sit with me.” Talk to me. Tell me about where you’re from. Tell me about your family. Tell me about your journey to LSU. The only way to develop a relationship is to be invested in the student-athletes. We have to know the details of their lives. The only way to do that is through conversation and asking questions and being an intentional listener.

ED: How would your former players describe you as a coach?

ED: How do you feel the staff is aligning together with so many different career backgrounds in NFL and college expertise? How is everybody grasping the main tenants of Coach Kelly’s program?

BP: Many people use the word process. They talk about the word process. But it becomes an abstract thing. With Coach Kelly, when we talk about the process, we know exactly what the steps are. They’re defined for us. It’s very easy for everybody to fall into lockstep when our standards, our expectations, how we’re going to do things, when they are so clearly defined for everybody in the program, it’s easy for us to find a rhythm. The other part of it is guys like myself and Mike Denbrock and coaches that have been around Coach Kelly and understand how things work, we can translate for the rest of the staff. What does he quite mean here? There are people on the staff that can help bring others along. I think it’s been terrific. It’s a joy to come to work with not only these coaches, but our analysts. This is one of the best support staffs I’ve ever been around from training room to equipment room to video, nutrition. There’s a lot of positive energy when you come in here every day and it makes it fun. It makes it fun to come to work.

ED: We all know to win in football, you have to win in all three phases of the game. Offense, defense and special teams, and sometimes special teams might not get as much respect and love as it deserves. What emphasis during practice, games, and in the film room do you and this staff put on the special teams?

BP: Well, it starts with Coach Kelly, and we emphasize the kicking game and our best players can expect that they’re going to have to play and we’ll do so enthusiastically. We will get our best guys out there playing. We will also identify players on our team, whose main contribution to us winning is going to be being a four-core unit player, and we’re going to celebrate those guys. But Coach has made it very clear to the team with, not only the amount of meeting time, practice time, the involvement of coaches like Matt House, the defensive coordinator, has no responsibility in the kicking game, yet he’s there every day in a drill, instructing, correcting, encouraging – that shows our team that the entire staff is dedicated to us being good in the kicking game. I think there are two-to-three games every year that are going to be won and lost in special teams. When we do it well, people don’t always notice but when it goes bad, the only time I show up on TV is when something goes awry. So we’re going to cover kicks, and we’re going to protect the punter and we’re going to do those little things well, and then when we have an opportunity to go make a play, we’re gonna go make it. Coach Kelly and I have a history together. We’ve played well in special teams. We’ve made game-changing plays. We’re going to continue to do that here at LSU.

ED: A lot of LSU fans are just as interested in recruiting as they are in the current team. Coach Kelly described you as a relentless recruiter. What excites you about recruiting in the SEC and throughout the state of Louisiana?

BP: Well, in the SEC, it’s the competition, right? This is the biggest stage in all of college football. That’s exciting. As it relates to LSU, being able to build your roster from essentially a 400-mile radius. At Notre Dame, our team came from 32 different states. While we loved every guy that we ever recruited there, and enjoyed coaching them, flying all over the country to recruit, I mean, I would fly from Chicago to Hawaii on a 10-hour flight in May. That’s a grind after all. To be able to build your team and have a legitimate home base, and not have to recruit nationally, out of need. If we choose to recruit nationally, it’s going to be out of desire, because we found somebody that we believe is going to make us a championship team and fits all the traits that we’re looking for. Those guys are out there and they exist. But, to be able to get up and say home base is going to be the state of Louisiana, it’s going to be Houston, it’s going to be East Texas, it’s going to be the Panhandle, that there are certain places we’re going to go and build the foundation of this roster – that’s exciting.

ED: You are from a football family through and through. How has that shaped the person and coach that you are today?

BP: My parents have shaped the person I am today. I’d like to think that they did a pretty good job. My mom and dad are the two most important people in my life. I’m blessed to have that kind of relationship. My father has been in football my entire life. My summer job was working training camp for the Buffalo Bills when they were going to Superbowl so I’ve never wanted to do anything else. Now, to their credit, both of them were hoping I would go to law school or do something different. But to be able to share LSU with my mom and dad, who are here as we speak, and be able to share what’s so special about this place, and have my dad get it, and have my mom get it, and to be able to lean on my dad for professional advice and counsel … That’s pretty incredible. I don’t take it for granted. I love every minute of it. We speak in a shorthand that a lot of other people don’t understand. My brothers and my sister Lynn, I mean, we’ve had this incredible journey and I’m so thrilled that they’re with me now and we get to share this part of it with them as well.

ED: New faces on the field, new faces in the staff room. What are you hoping to accomplish or at the top of your to-do list through spring ball?

BP: We want to identify our people. Who can we count on? Who can we trust? Set that group of core players that’s going to play for us, that I can put this guy on the punt team and trust him implicitly. Figure out who those guys are in between and bring them along. I love the spring because we don’t have the pressure of a ballgame waiting for us. We’re not preparing a specific installation. We are working on football. We’re working on technique. We’re developing a competitive desire. We’ll get the punt team installed, but everything else is about competing and trying to become better football players. I love Saturday practices in the spring where we set up those competitive so we create those matchups. We throw the music on we get it rocking and rolling out there and we get guys to cheer for each other. That’s the joy of spring football I love this time of year.

ED: Lastly, what does Brian Polian do when he’s not coaching football?

BP: He hangs out with Aidan Polian and Charlotte Polian and Laura, Miss Laura, my wife. I love golf. I’m not very good at it. I love to read. I love my peloton. That was a good investment. I love my peloton. It’s about family time. I enjoy the fellowship of our staff. We had a bunch of coaches over to watch the NCAA Tournament, Matt House, Joe Sloan, Denbrock, Coach Hankton and Brad Davis – you know you’re on a good staff when the families want to spend time with each other away from the building, and this is that type of staff, and I enjoy socializing in the fellowship and eating crawfish.