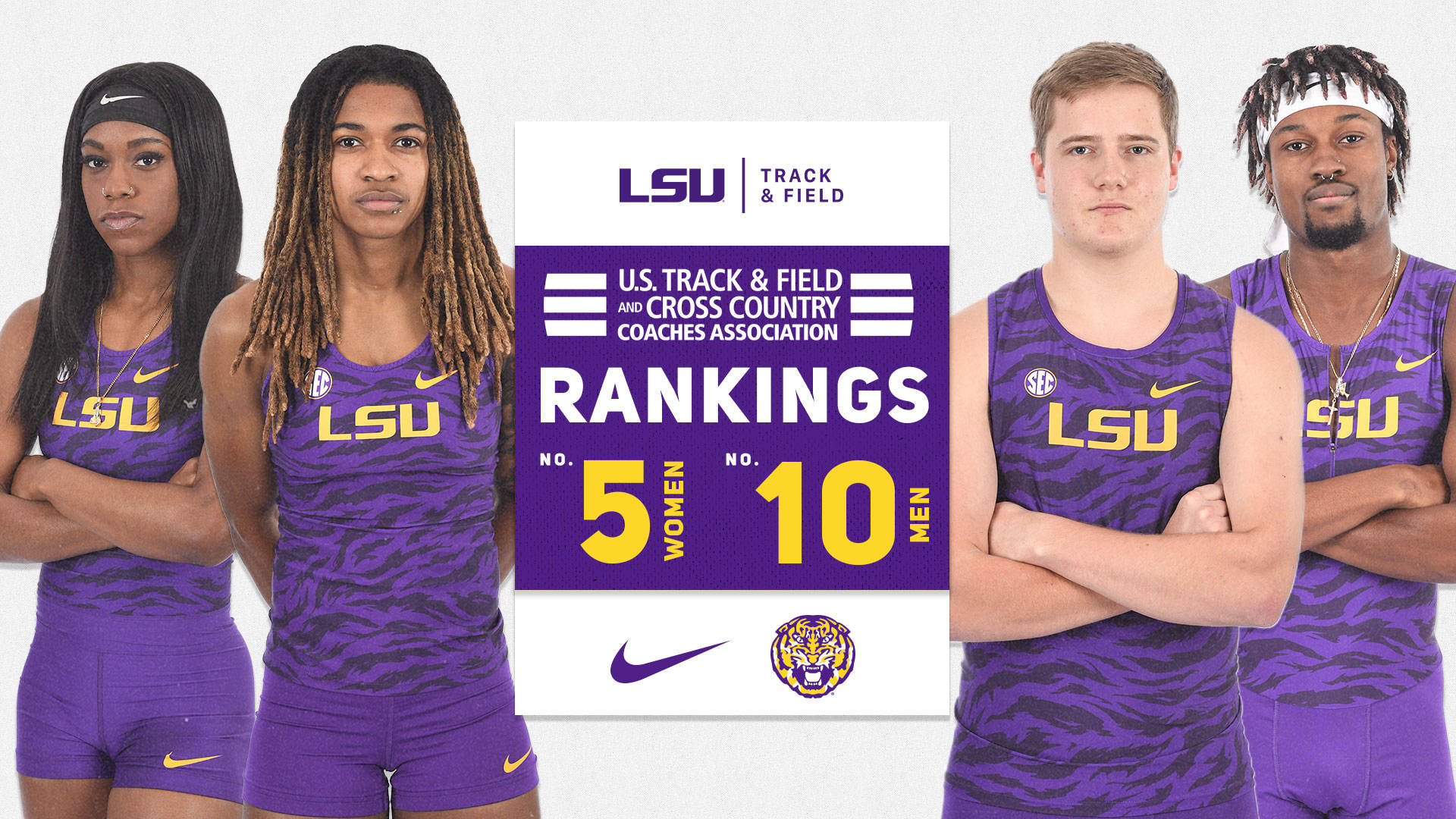 BATON ROUGE, La. – The LSU women’s and men’s track and field teams are both ranked inside the top 10 of the latest U.S. Track & Field and Cross Country Coaches Association (USTFCCCA) rankings. The women’s squad moved all the way up to No. 5 in the nation, and the men’s team earned the No. 10 spot in the first regular season rankings released for the 2018 outdoor slate.

The women bettered their position by four spots moving up to No. 5 from their preseason ranking of No. 9. The men, who were just on the outside of the preseason top 25, catapulted themselves 16 spots to the No. 10 position. LSU is one of six schools to have both the women’s and men’s track and field teams ranked inside the top 10 of the USTFCCCA rankings.

Coming off strong performances at the first three meets of the season, the Tigers have a plethora of nationally ranked athletes in a wide variety of events. Aleia Hobbs leads the way with the fastest 100-meter dash time in the nation (10.86). The wind-aided time of 10.86 is the second-fastest all-conditions time in the world for 2018 and it won her gold at the Texas Relays.

Hobbs has also teamed up with Mikiah Brisco, Kortnei Johnson and Cassondra Hall to record the fastest 4×100 meter relay in the world for 2018. At the season-opening Louisiana Classics meet in Lafayette, La., the foursome clocked a time of 42.65 to claim gold. LSU’s 4×100 meter relay squad owns the four fastest readouts in the world this year.

Johnson and Brisco have both been excellent in the open 100 meter dash this season as well. Following close behind Hobbs at the Texas Relays, Johnson’s season-best readout of 10.97 earned her silver and it was the second-fastest time of the season in the NCAA. Brisco registered a time of 10.99 in the final of the 100 meter dash invitational section at the Texas Relays to place fourth overall in the event; her time of 10.99 is the fifth-fastest in the NCAA this season.

The hurdling duo of Kymber Payne and Tonea Marshall own elite times in their respective events. Payne, a senior from Compton, Calif., went out and won gold in the 400 meter hurdles at the Texas Relays with a time of 55.92 to claim the fastest time in the NCAA in 2018. In the 100 meter hurdles, Tonea Marshall duked it out with an elite field of over 80 athletes and came away with silver. She cleared the hurdles on the straightway in 12.73 seconds to register the No. 2 time in the NCAA.

Freshman Abby O’Donoghue registered the sixth-best high jump clearance in program history at the second meet of the season in Tempe, Ariz., with a career-best mark of 5-11.25 (1.81 meters). The clearance earned her a gold medal and she was named the SEC Co-Field Athlete of the Week for the performance.

The boost in the men’s rankings comes via Damion Thomas’ NCAA-leading 110 meter hurdles wind-aided time of 13.43 that he clocked at the Texas Relays. Thomas outperformed over 60 other collegiate hurdles at the meet to win his second-straight 110 meter hurdle race of the outdoor season. The wind-aided time of 13.43 is the second-fastest all conditions time in the world in 2018.

LSU stole the show at the Pac-12/Big Ten Challenge in Tempe, Ariz., with the fastest 4×100 meter relay time in the NCAA this season, a 38.84. The foursome of Kary Vincent, Renard Howell, Correion Mosby and Jaron Flournoy combined to register the 38.84 and it is the second fastest in the world in 2018. Freshman thrower Jake Norris impressed at his second-career collegiate meet in the hammer throw; the native of Berkshire, England, heaved the ball and chain 238-06 (72.70 meters) to collect the second-best throw in school history and third-best mark in the NCAA.

The Tigers will open up their home schedule of the outdoor season this Saturday (April 7) with the Battle on the Bayou at the Bernie Moore Track Stadium. Events will being at 9:30 a.m. CST.