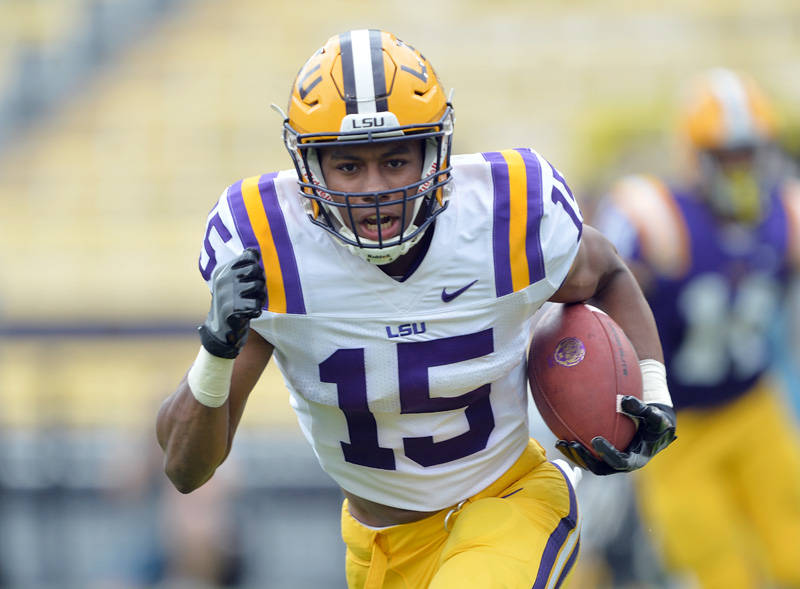 BATON ROUGE – Anthony Jennings and Brandon Harris combined to rack up 420 passing yards and threw for four touchdowns as the White team secured a 45-6 victory over the Purple team Saturday during LSU’s National L-Club Spring Game presented by Tony Chachere’s at Tiger Stadium.

Both signal callers were effective and efficient as LSU registered nine passing plays of 15-plus yards highlighted by a quartet of touchdowns. Each quarterback found wide receivers Malachi Dupre and Travin Dural on scoring plays.

Jennings was 13-for-20 for 242 yards and two touchdowns, while Harris posted an 11-of-17 effort en route to 178 yards and two scores. The Tigers also received a 3-for-3 performance for 55 yards and a touchdown from true freshman quarterback Justin McMillan.

Dural recorded four catches for 127 yards and two touchdowns. He hauled in the game’s longest play on a 70-yard pass late in the second quarter.

Dupre added four catches for 112 yards and two scores. He scored the game’s first two touchdowns from 37 yards and 35 yards out, respectively. The 35-yard catch was a diving, fully extended grab.

Tight end DeSean Smith opened the second half and scored a 50-yard touchdown pass from McMillan on a 3rd-and-10 play.

LSU’s rushing attack was led by Leonard Fournette’s eight carries for 42 yards. Darell Williams grinded out 40 yards on 10 carries and tacked on a touchdown, while freshman back David Ducre plunged in from 2-yards out on the game’s final play for Purple’s line score.

LSU begins the 2015 season when the Tigers take on McNeese State at Tiger Stadium on Sept. 5. Below is the list of the 2015 spring season award recipients which were handed out on the field after today’s game.

On the weather and the quality of the game…
“First of all, we got very lucky with the weather. Everybody told us that it was going to be a day of lightning, but we took the field anyway. It never rains in Tiger Stadium, and we know this. I look at the performances back in the spring, and we got the things done that we wanted to accomplish. We threw the football much more in spring ball. We did the same in the spring game. I felt that both quarterbacks really executed their throws at a very high level. They still were not perfect, but I think both moved forward and both played great. We are much better than we were offensively. Defensively, we made tackles. This was a good ending to a quality spring, and we are looking forward to the fall.”

On some younger players who made an impression in the spring…
“I think Kevin Toliver II really had a very fine spring. I think Kendell Beckwith is going to be a bear inside. He is a big, strong and fast man. I think he is going to have a great fall. Jamal Adams too, not that anyone is surprised, but I think the centerpieces are pretty strong in that defense. Offensively, [Ethan] Pocic had a good spring as well as Leonard Fournette. I was really proud to see our receivers step up and make big plays. I thought Travin Dural, Malachi Dupre, John Diarse and D.J. Chark all had a nice day. We are improved and looking forward to making plays against quality SEC opponents.”

On the most improved players on the team…
“Josh Boutte has to be one of the names that come up. He is a big, strong and physical presence that really needed to fix footwork and understand his position. I think he has done that. I think [Davon] Godchaux will be part of a special core of defenders.”

On having LSU football alumni return for the spring game…
“Once a Tiger, always a Tiger. This is a special group of men and through the years, these teams touch base and know the other players. As far as I am concerned as the head coach, they are more than welcome to stand on our sideline. They earned their way and made the tradition strong. We are very proud of them, and we are excited they stopped by because we miss them.”

On the improvement of the quarterbacks …
“I feel like they’ve both improved mentally. It’s never been a physical problem. They’ve both become much better leaders and have just taken charge. I think it’s shown. Moving forward, we have a lot of work we still have to do, but I feel confident and am looking forward to the season.”

On his confidence level coming into his sophomore year …
“The difference is I have a year under my belt, and it’s not going to be a big surprise to me. Just moving forward, I know what I have to do to dominate and make plays to help with the run game and the passing game. The coaches that we have and the quarterbacks that we have and the improvement that they’ve made, I feel like they are going to be very dominant in the passing game and so will the other receivers.”

On the lessons he’s learned heading into his sophomore season …
“Hopefully, I’ve improved since last year. I just wanted come out and show that I can run a complete offense and led my team to a touch down whether it is passing or running. It’s about just getting the ball off and getting us it in the right play.”

On his growth from last season …
“I think I’m more confident, and I try to tell everybody that I’ve been working my tail off in the offseason learning from Cam (Cameron) and doing everything that I can possibly do to increase my maturation process where I can be the best quarterback I can be and help this team. I’ve said it over and over again this Spring, we were the weak link on the team last year. It’s not nice when people talk about our quarterback situation, and that we are not doing really well. I take that with a chip on my shoulder. I want to just come out and prove how much I’ve improved personally and how much this team has improved.”

On his focus to improve during the spring…
“Competition brings out the best in everybody, but you have to better yourself each and every day and be the best that you can be. I’m going to look at this and evaluate this performance of mine right afterwards and see the little things I can improve on. Why did I miss certain throws? Did I make the right checks? Did I read the defense right? I just continue to better myself.”

On what he has improved on since the bowl game…
“I think my poise is better. I think that my command of the offense is even better than it has been. Obviously, my footwork has improved, which makes me throw the ball where it needs to be. I have to continue to improve that.”

On what we learned during today’s spring game…
“I think we learned that we have guys that can make one guy miss and make a big play. We still have some of the greatest backs in the nation. We can get them the ball and make a play, and we have some of the greatest O-lineman in the nation. I think that if we continue to improve the sky is the limit.”

On the play of the quarterbacks …
“Both quarterbacks, we can depend on. They are in control of the game, and we are just following their steps.”

On his first spring game experience in Tiger Stadium…
“It was alright. We are just all getting better as a whole. We are just learning the plays, and everybody came together. It’s a great feeling.”

On the team’s goals from spring practice…
“We wanted to come out here and get better on our technique, learn the defense and improve on every aspect of the game as a whole. I think we had a few wrinkles, but we came out there and competed. Overall, our offense did well. We hope that carries through into the season.”

On his improvement throughout the spring…
“I worked on a lot of things. Coach (Corey) Raymond stays on me about technique and just doing the little things. There’s nothing that I’m not working on improving. I’m always working. I feel that my game is ready to compete for the SEC title, as well as the other guys. I really think we have a good shot.”

On the highlights from the team’s spring practice …
“The highlight from this spring was just flying around and having fun with these guys. This team is a brotherhood, but in the DB room, we are family. We get on each other. There have been a bunch of highlights from Jalen Mills to Rickey Jefferson to Tre’Davious White. Everyone has been making great highlights, and it’s just making the team better.”

On the defensive performance during the spring game…
“It was pretty good for the one’s. The two’s had it a little rough, but of course, they were going up against our number one offense. We have a lot of guys making plays over there. Overall, this spring has been a great experience being my last one. I’ve been enjoying my coaches, my teammates and the whole experience.”

On his favorite moment from spring practice…
“Today’s game has been the best moment of the spring for me. We had a lot of guys come out of their shells today and make a lot of great plays that we’ve known they have the ability to make. They just came out and played today.”

On his takeaways from the spring practice period…
“This spring has shown us just how good we can be, but there is always room for improvement. This team has no ceiling. We have a lot of playmakers on this team at every position, including special teams—our kickers. We just have to go out there and be able to improve throughout the offseason, during the summertime, camp and going into the season.”

On what the defense needs to improve on going forward…
“We just need to make sure that we are playing together all the time and communicating with one another. That way, we are all on the same page. As long as we do that, we’ll be fine.”

On waiting for the season opener…
“It’s tough, but it is going to be a well needed break. We really worked hard this spring. I think we progressed and looked better and better. We had some different techniques for different positions, and it was good to see us perform well using those.”

On the improvement on the quarterbacks during the spring…
“Last year, I think Brandon Harris was a little nervous, but he had a good days. He had a good day this year during the spring too. I think Anthony did very well today too. Justin McMillan made some good throws too. The quarterback position is difficult, and those guys have improved a lot this spring. We have full confidence in any of those guys, whether we are playing Mississippi State or Alabama. They can get the job done.”

On Coach Ed Orgeron getting the defensive lineman ready for game day…
“Oh yeah, he (Coach Orgeron) was fired up. Before we went in there, he kept shrugging his shoulders. He was really pumped. I don’t think he slept last night. He is so excited, and we couldn’t be happier to have a coach like him. For us, he brings that energy every day. He’s a great coach and a great guy.”