Kampen Serves On and Off the Court 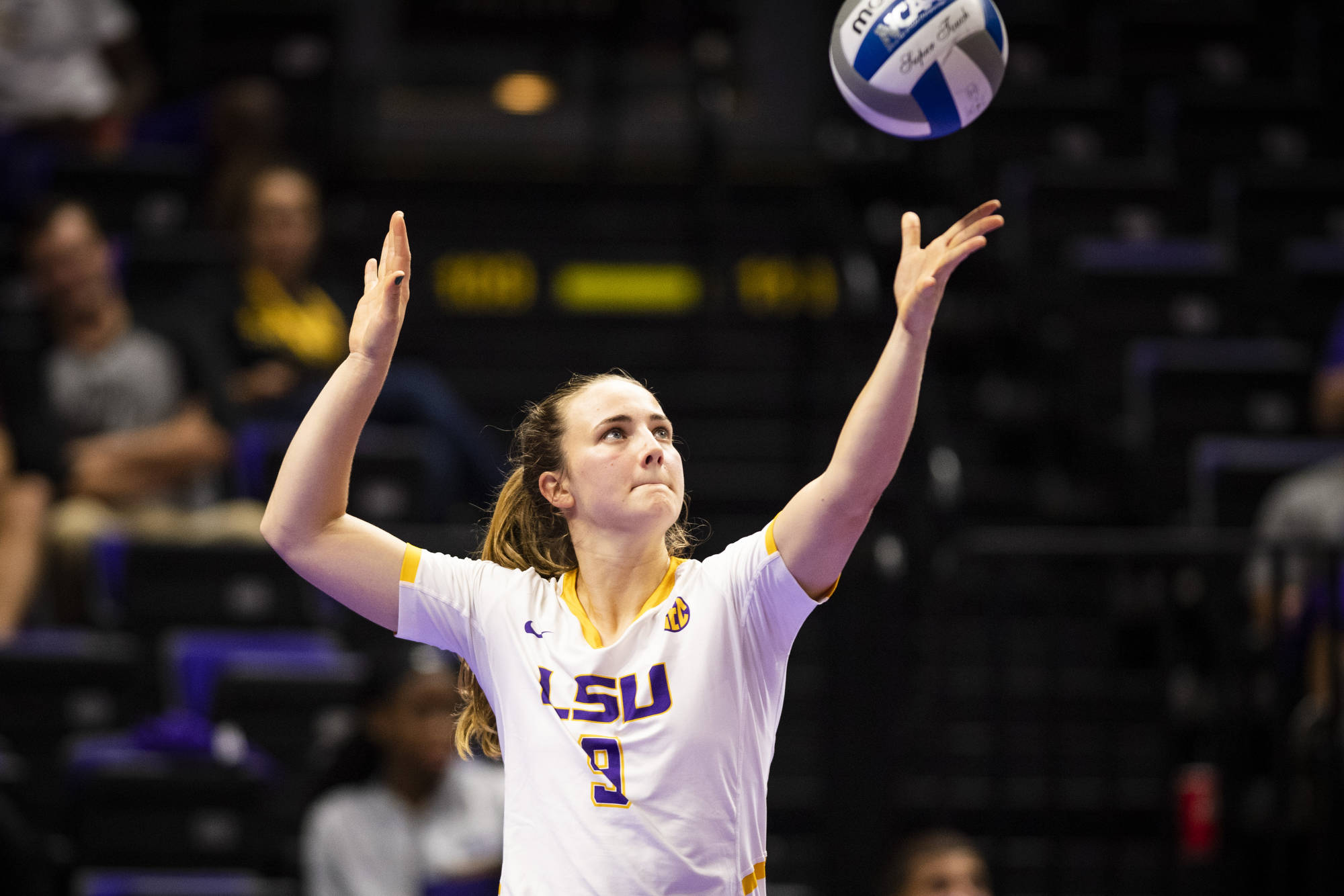 Being raised in a household full of Tulane alumni, it’s a wonder how senior defensive specialist Katie Kampen ended up playing volleyball at LSU. However, with her family’s full support, Kampen had no problems making the decision that this was the school for her.

“I mean my grandparents, aunts and uncles, and my parents went to Tulane,” she says. “So, I was raised to never like LSU.”

Now, Kampen’s parents, Bill and Jami Kampen, are full-blown LSU volleyball fans and are super supportive of their daughter. This doesn’t necessarily mean that her father, a former pitcher for Tulane University, pulls for other LSU sports, but volleyball is a good place to start.

“They love LSU and they knew that this was the place for me,” Kampen says.

Kampen attended Mount Carmel Academy in Metairie, Louisiana for high school where she played volleyball. Softball was her first love, but when her pitching shoulder started to hurt her, she had to choose between the two.

“I had to pick one and volleyball was where my heart was at,” she says.

Eighth-grade was Kampen’s last year playing basketball and softball. It was also one of the years the varsity volleyball team at her high school won a state championship. Kampen got to experience two championships during her time as a Cub, and one of those times was her senior year.

“That year we had unwavering work ethic,” she says.

Two of LSU’s beach volleyball players, Megan Davenport and Kristen Nuss, were also on that winning team with Kampen.

“We had a great team dynamic and a really fun group of girls,” she says.

Another LSU player that Kampen knows from high school is senior outside hitter Toni Rodriguez.

The two first met when their teams played against each other at St. Amant High School. Rodriguez went down with an ACL injury early on in the match.

“After the game, it was like an honor,” she says, “I went to the training room and got to talk to her.” Kampen encouraged Rodriguez, telling her everything was going to be okay and that she was going to be great in college. “All I wanted to do was give her a hug,” she says.

Now the two wear the same uniform and lead the team side-by-side, along with seniors Olivia Beyer and Lindsey Flory.

“We’re practically like sisters now,” Kampen says,” and it’s funny because we never would have guessed we’d be so close at that point in time.”

When Kampen got serious about volleyball and about looking at potential schools, she reached out to Head Coach Fran Flory and, at the time, Associate Coach Jill Wilson.

“I wasn’t expecting to like it because we were Tulane fans,” Kampen says

But, during her visit, Kampen says she could feel the spirit in the air. She continued to visit other schools, and when she started comparing them to LSU, Kampen knew that she belonged in a purple and gold uniform.

“I just knew there was a love and a spirit here that was unlike any other and I couldn’t wait to be apart of it,” Kampen says.

Four years later, Kampen is now playing in her final season as an LSU Tiger and wants nothing more than to enjoy every moment and to leave behind a legacy.

“It’s kind of bittersweet, but right now, it’s more of just having this role of leadership,” she says, “and we have the opportunity to help our team in the best way possible. It’s exciting, but it’s kind of surreal.”

Not only has Kampen learned how to be a powerful and dependable server in the game of volleyball, but throughout her time at LSU, she has also learned how important it is to serve others.

Kampen says that serving has been a big part of her role on the team, and she had to learn to take pride in that role. As simple as it may seem, Kampen says that the people who can come in and serve in a crucial moment of the game are very important.

“The small roles we play, whether you are on the bench cheering your heart out or starting outside and playing six rotations, all of those roles matter,” she says.

For Kampen, serving applied to more than just serving the ball. It applied to serving and giving back to the community as well.

“Just serving one another has really been huge in growing our bond as a team,” she says. “I really feel like we’re prepared to go out into the world and serve others.”

Kampen says she is going to miss her team and coaches, the camaraderie they have and all of the fun memories they share. She will also miss having the entire LSU community stand behind her and everything she does on the court, in the classroom and in the community. However, she says knows that support is there to remain.

“Once you’re here, you’re in the family forever,” Kampen says.