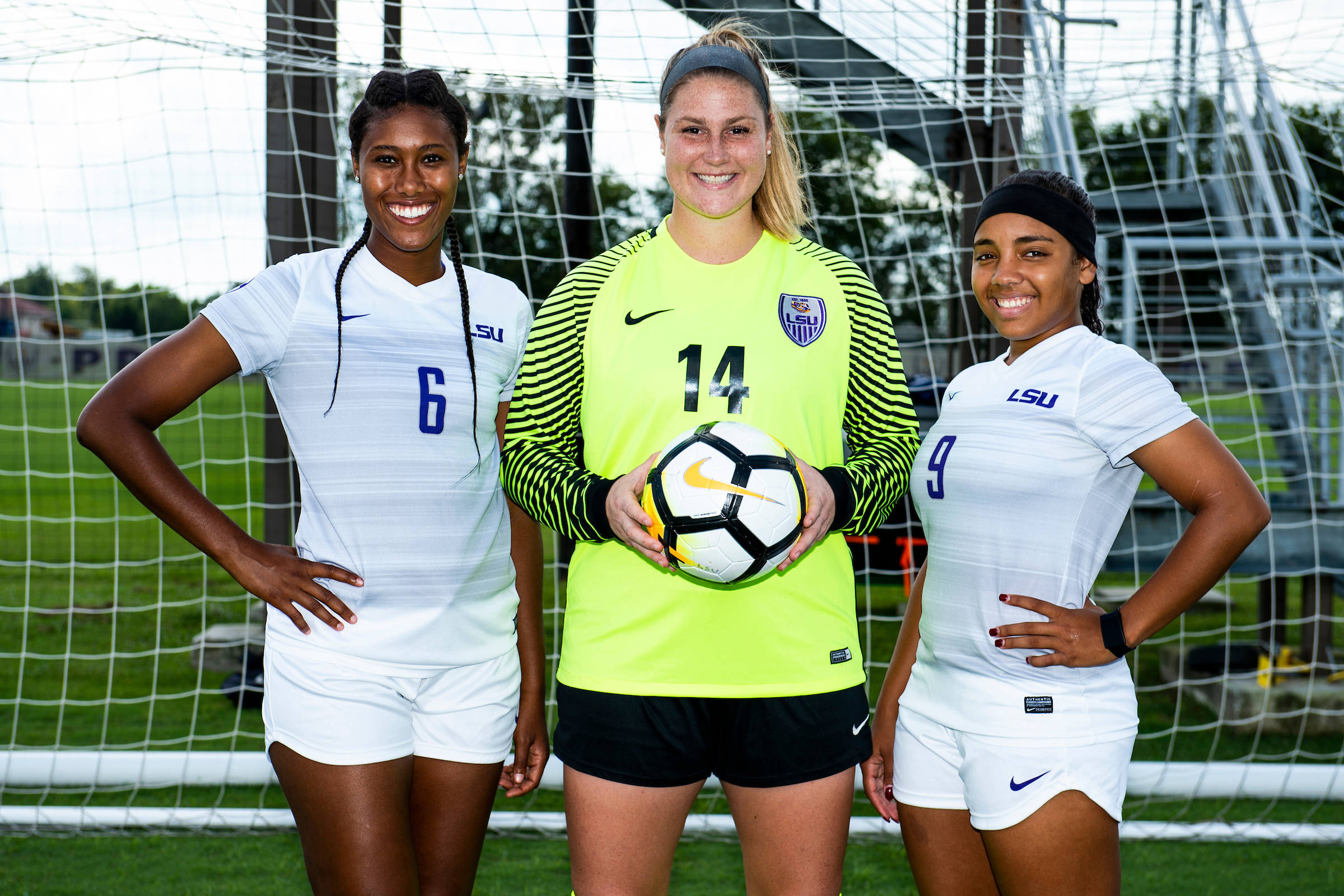 What is a leader?

The great Vince Lombardi said this: “Leaders aren’t born, they are made.  They are made by hard work, which is the price which all of us must pay to achieve any goal which is worthwhile.”

LSU soccer’s senior class – which features a goalkeeper with a knack for the shutout, a defender with double-digit goals, and a midfielder who can overcome any obstacle that comes her way – epitomizes the qualities in Lombardi’s quote.

In a year in which leadership was needed for a team with a young roster, Caroline Brockmeier, Alex Thomas, and Chrissy Pitre have stepped up in a big way.  Never mind the fact that these three seniors have helped match last year’s win total with eight.  Never mind the fact that they have already won more SEC games this year than last.  What they mean to this team goes way beyond wins and losses.

It’s about bringing a certain confidence back to the pitch at the LSU Soccer Stadium.

Brockmeier made her way to Baton Rouge after being a part of a National Championship and back-to-back ACC Championship teams at Florida State.  She believes that those years have shaped her into the player and leader she is today.

“Those years gave me a lot of experience but coming here was a totally different experience,” said Brockmeier.  “Those years did help overall though as far as knowing what it took to be in an elite program.”

In addition to being a team leader, she also finds herself all alone in second place for career shutouts by an LSU Tiger.

“I honestly had no idea that stat even existed until it started getting posted,” she joked.  “I obviously look to get a shutout, but it has never been in my mind to break any records because I know that it is a true team effort.  With that being said though, it is cool to be able to look back in the record books and see your name knowing that you left a mark in some way.”

The rest of Brockmeier’s teammates feel they can win every game with her in the net, as does Head Coach Brian Lee.

“She’s so good on crosses,” said Coach Lee.  “When you have a goalkeeper who has extended range and can come out and shut down things before they really get started, it’s huge for the confidence of the team.”

Thomas brings leadership in a completely different way.  She leads by doing whatever she is asked to do.

Thomas has in fact done it all for the Tigers in her four years.  After being one of the top strikers in the state coming out of high school, Thomas spent her first two years as the team’s starting right back.

“This is my last year, and as a leader of this team, I have people that are depending on me to do my job no matter what that is,” said Thomas.  “As long as I can help us win, it doesn’t matter where I am on the field.”

During her junior year, Thomas found herself back in the front line for the Tigers and emerged as a prolific goal scorer finishing with eight on the season.

Coming into her senior campaign, Thomas was asked to move back to the Tiger back line.  She did it without hesitation.

“Alex will and has always done whatever it takes to win,” said Lee.  “She plays her best in the biggest games and in the most important moments.”

The word adversity is thrown around a lot in sports. The great athletes never let adversity slow them down.

Chrissy Pitre has never let anything slow her down.

After appearing in 20 matches and making 18 starts in her freshman season, which featured two assists, Pitre suffered a torn ACL which put a halt on her sophomore year.

“That year was tough,” said Pitre.  “That was the year that we made the SEC Tournament so not being able to be a part of that has made me work that much harder to get back to full strength and to help this program get back to the tournament.”

Pitre made her return to the pitch during her redshirt sophomore season and has played a big part ever since.  Even if the box score doesn’t say so.

“To me, it’s not about what other people are seeing,” said Pitre.  “Just knowing that my teammates rely on me both on and off the field really makes me proud that I am valued on the team.”

“On the field, Chrissy is our leader,” said Lee.  “To go through what she’s been through and get back to full form has taken a lot of work.  She really personifies this year’s team and that whatever it takes attitude.”

These three seniors have been together for 23 wins but have one thing on their minds: finishing the year strong and making it back to postseason play with a team that features 13 freshmen.

“It would mean a lot to get back regardless of how young we are,” said Thomas.  “I don’t see the freshmen any different than our seniors.  It has nothing to do with their age, it just has to do with how hard they’re willing to work.  Even though we are young, everyone is contributing and playing their role with one outcome in mind.”

No matter the outcome of the season though, Coach Lee will never forget the three senior leaders who have contributed so much.

“I will always think fondly of these girls.  We’ll see where the season goes, but we really think that this team can do some really special things behind their leadership.”

“Even more so, their role in changing the culture and changing the direction in this season with such a young team will be something we’ll see the benefits of long after they’re gone.”

These seniors, Brockmeier, Thomas, and Pitre, have definitely stepped up to the challenge of leading the LSU Tigers Soccer team in the right direction. They have left their mark and their contributions continue to be an invaluable asset to the team.