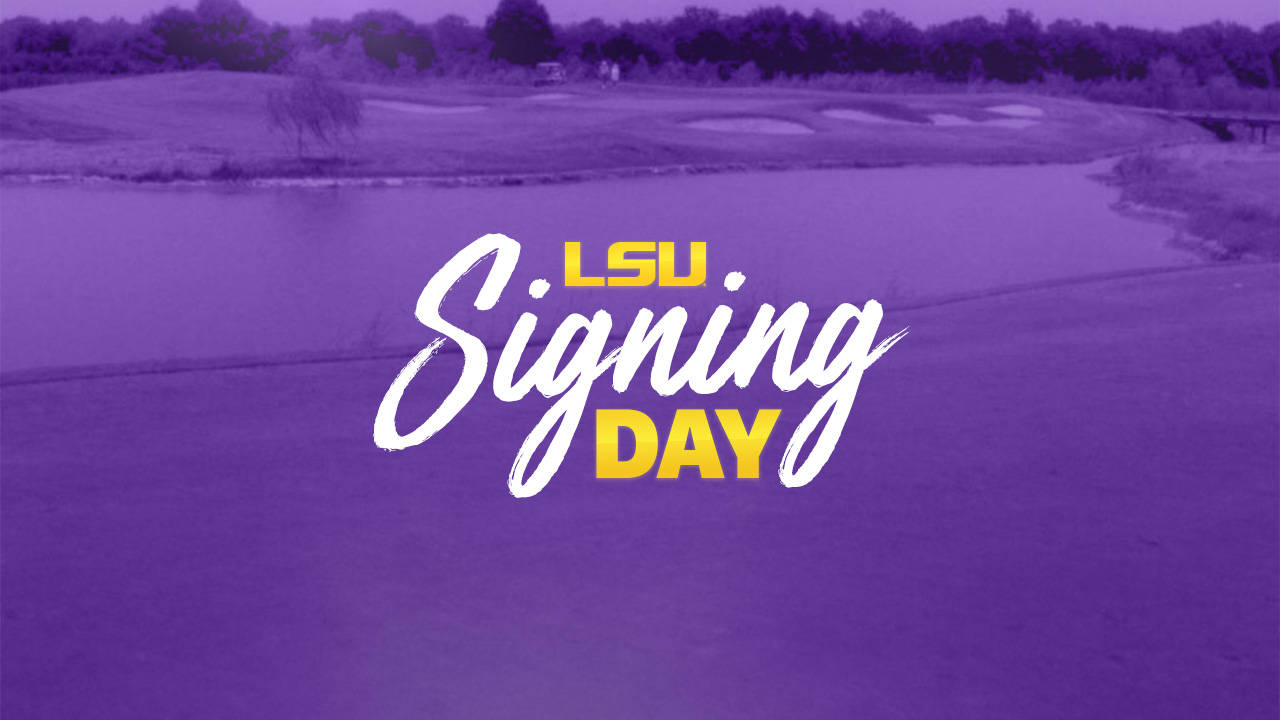 BATON ROUGE – The LSU Men’s Golf program is sure to remain a national power for years to come after signing arguably the nation’s No. 1-ranked recruiting class for the Class of 2018 as head coach Chuck Winstead announced the addition of Garrett Barber, Michael Sanders and Hayden White on Thursday.

Barber of The Pine School in Stuart, Florida, and Sanders of Cannon School of Concord in North Carolina boast top-six national rankings in the Class of 2018 as they sign their National Letters of Intent, while White from Benton (La.) High School joins as arguably the top-ranked recruit in the state of Louisiana this season.

The 2015 NCAA Champions continue to stockpile elite talent as their Class of 2018 joins a roster that already features five players that ranked among the nation’s Top 20 recruits in their respective signing periods.

“We are excited to welcome Garrett, Michael and Hayden into our program at LSU,” Winstead said of this year’s class. “First and foremost, they are the type of quality individuals that we want representing LSU for the class they show on and off the course. They have achieved at the highest levels of junior and amateur golf, and we look forward to their continued development at LSU.”

A three-time Rolex Junior All-American during his junior golf career, Barber ranks as high as No. 4 nationally in the Class of 2018 and No. 6 among all junior golfers in the country in the latest Rolex Junior Golf Rankings as of Wednesday’s National Signing Day. He is also the No. 6-ranked recruit in the class by Golfweek and No. 7 by the National Junior Golf Scoreboard among high school seniors.

Barber has been honored as a Rolex First-Team Junior All-American with his performance in 2017 that includes advancing to the Round of 32 of match play at the U.S. Amateur Championship in August and recording his perfect 3-0 record in match play to lead the United States to victory at the inaugural Junior Presidents Cup earlier this year.

Barber clinched the winning point for Team USA at the Junior Presidents Cup co-sponsored by the American Junior Golf Association to run his record to an impressive 12-5 in AJGA match-play events.

The 2017 Florida Class 1A State Champion also boasts the title of 2016 Jones Cup Junior Invitational Champion while picking up nine career top-10 finishes in AJGA events. That includes a fifth-place finish at the FootJoy Invitational and tie for eighth place at the Rolex Tournament of Champions in 2015, a tie for ninth place at the Polo Golf Junior Classic in 2016 and a tie for eighth place at The Junior PLAYERS Championship presented by TaylorMade-adidas Golf in 2017. Barber also tied for fifth at The Junior Open Championship at Kilmarnock Golf Club in Scotland a year ago.

Like Barber, Sanders is a consensus top-10 recruit in the Class of 2018 as he is ranked as high as No. 6 in the class and No. 7 among all junior golfers in the National Junior Golf Scoreboard. The North Carolinian also ranks No. 10 nationally among players to sign a National Letter of Intent in the Rolex Junior Golf Rankings.

Sanders has been recognized for his performance in 2017 as an American Family Insurance First-Team All-USA selection by USA TODAY and Rolex Second-Team Junior All-American as announced by the AJGA.

Sanders is a two-time AJGA tournament champion with wins at the IZOD AJGA Championship and Junior All-Star at Chantilly National back in 2015 while also picking up nine top-10 finishes in AJGA-sponsored events for his efforts. He most recently tied for second place at The PING Invitational before signing his National Letter of Intent with the Tigers.

A standout performer at all levels of junior and amateur golf, Sanders is the reigning champion at the Carolinas Junior Boys’ Championship after winning the 68th edition of the event earlier this season with a score of 9-under par 207, including a 5-under 67 in the final round to overcome a one-shot deficit at the start of play.

At the prep level, Sanders helped lead Cannon School of Concord to the North Carolina Independent Schools Athletic Association Class 3A State Championship as a freshman in 2015 before capturing back-to-back Class 3A individual state titles as a sophomore in 2016 and again as a junior in 2017.

White signs his National Letter of Intent as one of the top prospects in the state of Louisiana in this year’s signing class and the reigning Shreveport Times Best of Preps Golfer of the Year for 2017.

Officially signed with LSU. Ready for these next few years with @LSUMensGolf . Geaux Tigers! #SigningDay pic.twitter.com/lp8kWGUKcj

The 2016 Louisiana High School Athletics Association Division II State Co-Champion fired a score of 8-under par 136 to earn the title of individual state champion for the first time while teeing it up for Benton High School in Bossier Parish. White has also earned eight top-10 finishes in AJGA events during his junior golf career, including his first AJGA win during the 2016 season at the EaglesDream Golf Academy Junior Championship held at Timacuan Golf & Country Club in Lake Mary, Florida.