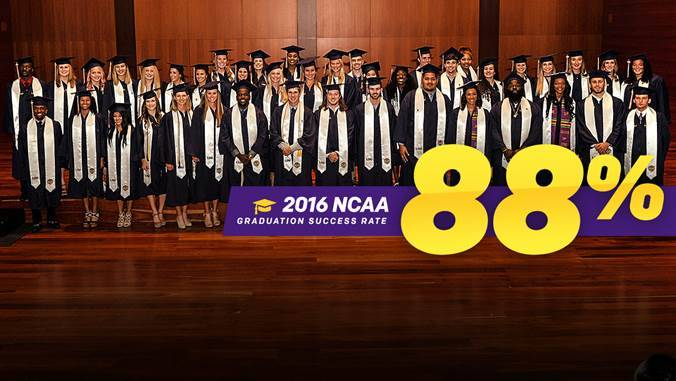 BATON ROUGE – Success for LSU student-athletes in the classroom reached an all-time high as the NCAA recently reported the Graduation Success Rate (GSR) score of 88 for the Tigers, four points better than the previous high which was set a year ago.

LSU’s GSR score of 88 ranks fourth along with Missouri among all Southeastern Conference institutions. LSU’s score of 88 is four spots higher than the NCAA Division I average of 84. LSU’s score also continues a trend that has seen the school’s score improve, or remain the same, since the inception of the report in 2005.

Since taking over at LSU in 2008, vice chancellor and director of athletics Joe Alleva has put a premium on success in the classroom for LSU student-athletes and the results have been impressive. LSU’s 19 percent improvement in the GSR since 2008 ranks as the best in the SEC during that span, topping Missouri (17 percent) and South Carolina (15 percent).

“As educators, our focus has always been to prepare student-athletes for the rest of their lives and graduation is critical in that process. It’s our goal that every student-athlete who comes to LSU leave with a degree and be given every opportunity to have success in the classroom, in competition and be contributors in the community. We are proud of the accomplishments of our student-athletes.”

Baseball followed with a score of 89.

“No success happens without articulating a ‘vision’ followed by implementation, execution, and an evaluation,” LSU assistant vice chancellor for academic affairs and executive director of the Cox Communications Academic Center Kenneth Miles said. “We, in the Cox Communications Academic Center for Student-Athletes, are committed to the vision and trust the process of our ‘Total Team Commitment’. The process that has led us to a 19 percent increase from 2008 to 2016 in our graduation success rate for all LSU student-athletes. This is up by 4 percent from 2015, clearly a monumental achievement.

“We are very happy to say that the success that we have experienced thus far does not happen alone but with the alliances of others from academic affairs, athletics, schools and colleges, human resource management, and our student-athletes. So appreciation and kudos to our 88 percent graduation success rate which is the product of all the aforementioned being on the same page of the same book…’entering to learn and leaving to serve’”.

The NCAA developed the Graduation Success Rate to more accurately assess the academic success of student-athletes. The rate holds institutions accountable for transfer students, unlike the federal graduation rate. The GSR also accounts for midyear enrollees and is calculated for every sport.

The most recent Division I Graduation Success Rates are based on the four entering classes from 2005-2006 through 2008-09. The NCAA began compiling these figures with the entering freshmen class of 1995.