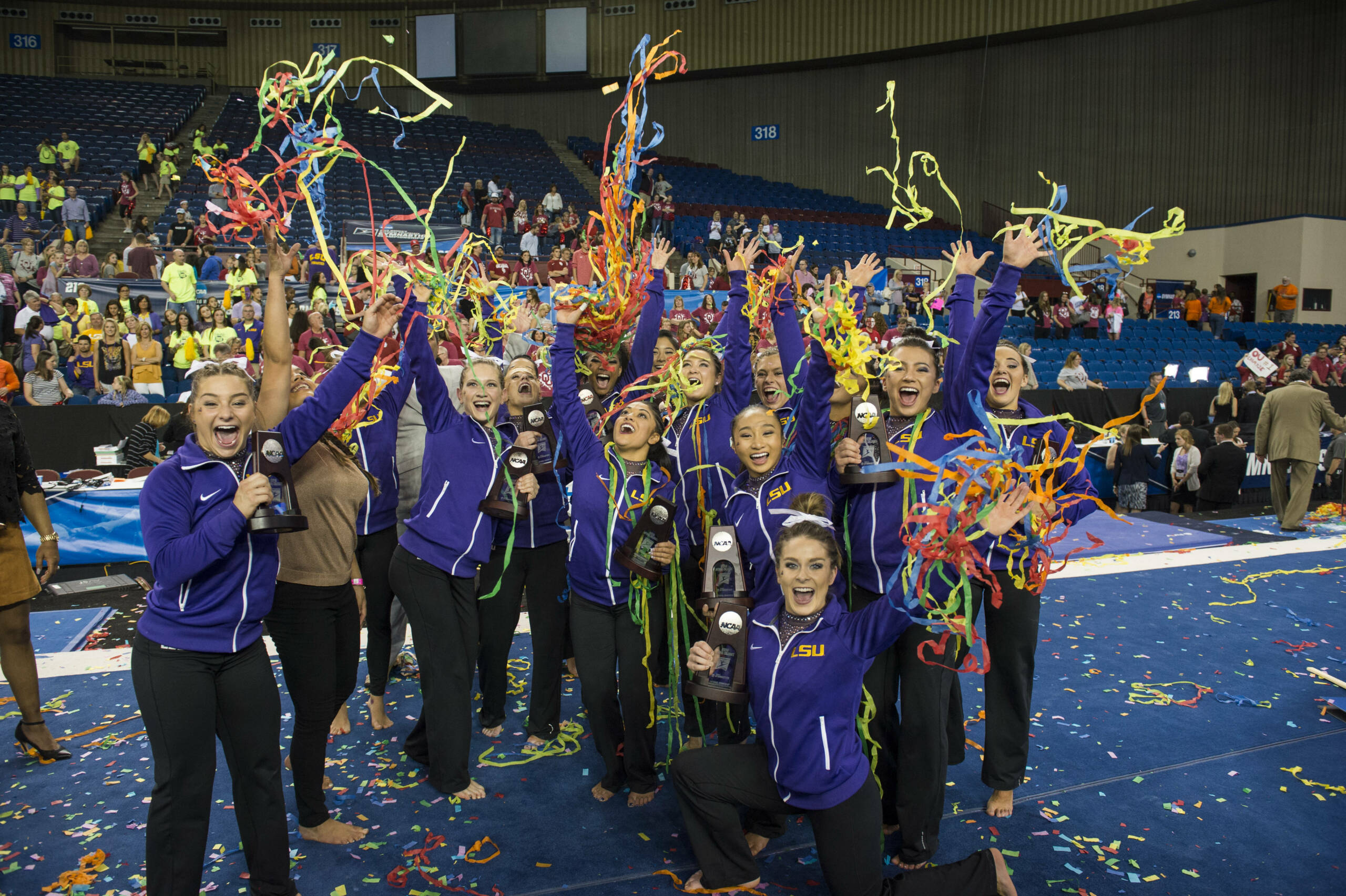 FORT WORTH, Texas – Behind a furious comeback in the second half of the meet, the LSU gymnastics team surged to a 197.4500 to earn second place in the NCAA Super Six, the highest finish in school history, Saturday night in the Fort Worth Convention Center.

No. 3 LSU ended the season at 31-6 overall, surpassing 30 wins in a season for the first time in school history.

The previous best finish was third place in 2014 in the Super Six in Birmingham, Alabama.

The Tigers delivered a 49.4625 on floor and a 49.5250 on vault in the final two rotations, to claim the highest finish in school history.

“I am extremely proud of this team and the coaching staff,” LSU head coach D-D Breaux said. “I am proud of the support that our athletic department and entire university have given this team, and I am so proud of the amount of maturity and the process this team has stayed in. There is nothing that has detracted from this team doing the very best they could, and they showed there is always a fight in these Tigers.”

Halfway through the meet LSU sat in fifth place at 98.4625, but the Tigers mounted a big comeback after a pep talk from Breaux.

“This season the message was to ‘Geaux Together,’ which is to respect each other, take care of each other and pick each other up when one of us is down,” senior Randii Wyrick said. “It’s been amazing to be a part of something so great, and I couldn’t be more thankful for that. To be able to represent such an awesome university like LSU and everything it embodies, it has been such an honor to wear those three letters on my chest.”

The Tigers posted a 49.3375 on beam, the highest beam total at the NCAA Championships in school history. Erin Macadaeg and Hambrick led the squad with 9.8875s from the beginning of the lineup. Sarah Finnegan tallied a 9.875, and Julianna Cannamela earned a career-high 9.85. Gnat anchored the event with a 9.8375.

Needing a big score on floor in the fifth rotation, that’s exactly what the Tigers produced with a 49.4625. Hambrick and Gnat led the team with matching 9.925s, followed closely by a 9.90 from McKenna Kelley. In her final routine as a Tiger, Wyrick delivered a 9.8875, and in her final floor routine Savona posted a 9.825.

LSU put on a vaulting clinic in the final rotation, using fantastic vault to earn a 49.5250. Cannamela tied her career high with a 9.90 in the leadoff spot, while Sydney Ewing and Finnegan each provided outstanding vaults to score 9.90s as well. Hambrick secured a 9.875 in the fifth spot, and Gnat nailed her vault for a 9.95 in the anchor spot to cement the Tigers’ comeback to second place.

“I am so excited and so proud of our team,” Gnat said. “We brought so much collective energy and stayed together throughout the meet. We wanted to win the national title, but I am proud of our effort to come back and finish second. The future is so bright too, and I can’t wait for next season.”