by Will Stafford (@WillStaffordLSU)
Post-Round Quotes +0 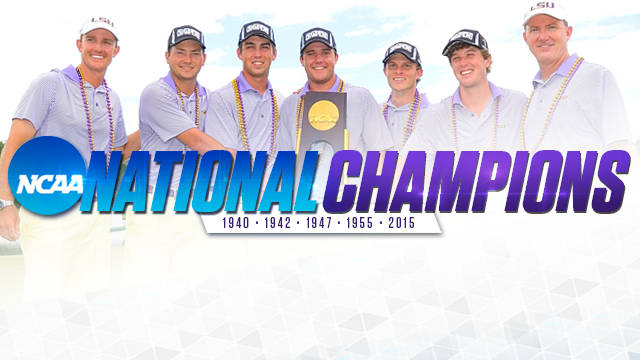 BRADENTON, Fla. — Just as he did in Tuesday’s national semifinal against Georgia, LSU’s senior All-American Ben Taylor scored the deciding point by rolling in a nine-foot par putt at the par-four 18th hole to claim a 1-up victory over USC’s Bobby Gojuangco and hand the Tigers their fifth national championship with a 4-1 victory over the Trojans.

With All-SEC standouts Zach Wright and Brandon Pierce already in the clubhouse with match wins of their own and watching nearby, Taylor made it 3-for-3 for the Tigers in Wednesday’s NCAA Championship Match by coming from behind on the back nine to defeat Gojuangco on the final hole and seal LSU’s victory.

Pierce put the first point on the board for the Tigers with a 2&1 win over Rico Hoey, while Wright followed with a 3&2 victory over Sean Crocker to push LSU’s advantage to 2-0 as Taylor played the 18th.

With All-SEC sophomore Eric Ricard defeating Jonah Texeira by a 1-up margin and senior All-American Stewart Jolly going 1-down to Eric Sugimoto, the Tigers were crowned national champions for the fifth time in team history with a 4-1 victory over the No. 5-seeded Trojans in the title match. They captured their first NCAA Championship in 60 years after also being crowned champions in 1940, 1942, 1947 and 1955.

“I’m just so proud of these guys,” said LSU head coach Chuck Winstead of his team winning the national championship for the 2015 season. “It’s hard to get into a position to even have a chance to win this tournament, and then when you show up out here today and you still have the resolve to play the way we did, I’m very proud of the guys on this team.

“There are a lot of people at LSU that care about men’s golf, and really the athletic department, so having graduated from LSU and being a Tiger, it’s very special. The supporters at LSU and the administration have very much supported us these 10 years. We didn’t do this by ourselves, so I think it means quite a lot. They’ve invested.”

Taylor scored the third and deciding point to send the Tigers into the NCAA Championship Match on Tuesday when he defeated Georgia’s Zach Healy by a 2-up margin on the 18th green in their semifinal match.

The 18th hole was again the site of LSU’s match decider when Taylor rolled in his par putt from nine feet to close out his match with Gojuangco by a narrow 1-up scoreline and deliver the title to Baton Rouge for the first time in 60 years. But it was a match very much in the balance as Taylor found himself 1-down to his Trojan opponent after 16 holes and both players heading to the par-five 17th.

Taylor went up by as many as two holes early on the back nine as he opened the side with a par at the par-four 10th hole to extend his lead, then dropped three-straight at Nos. 11-13 to fall 1-down to Gojuangco late in the match. That’s where he remained as both players put their drives in good positions in the fairway on the reachable par-five 17th.

Knowing that his opponent would likely make birdie, Taylor addressed his ball and fired a 4-iron from 258 yards to within five feet of the hole where he would knock down his putt for eagle and square the match.

“Surprisingly not too bad,” Taylor said of his nerves as he prepared to hit his second shot into the 17th green. “Before I hit my shot Coach (Chuck Winstead) asked me, ‘Are you having fun?’ It was hard to say no because it was a lot of fun. It was a perfect club, a perfect yardage, and we knew it was going to be a good shot. To see it run up that tier and go to the back of that green by that back pin was pretty special.”

Gojuangco’s bogey at No. 18 then opened the door for Taylor to seal the title for the Tigers as he buried his par putt after leaving his first putt well short of the cup from the back-left side of the green.

“It was a perfect moment to end a perfect college career, and I couldn’t be more happy. I’m emotional and don’t even know what else to say. It’s been a great day, and what a finish to my college career. I’m so happy, just a great feeling,” Taylor shared with Golf Channel’s Angela Hamann after the victory. “At first on the birdie putt, we knew that a two-putt was likely going to be good enough to win the national championship, but it was obviously a very fast putt that I left short. I had that putt in the practice round, about 10 feet down the hill. We had the line and I just had to put a good stroke on it.”

Like Taylor, Pierce and Wright both ended their time at Concession Golf Club unbeaten in match play at the NCAA Championships to help lead the Tigers to the team title on a Wednesday afternoon that will live long in the memory. Pierce took down Hoey, 2&1, to finish 2-0-1, while Wright closed out Crocker, 3&2, to match Taylor’s perfect 3-0 record for the week.

Pierce handed Hoey his only defeat in three matches, while running his own record to 2-0-1 after also defeating Vanderbilt’s Theo Humphrey, 1-up, in the quarterfinal round and squaring his match with Georgia’s Sepp Straka after 18 holes in the semifinal on Tuesday. It was an exclamation point onto the end of what should be an All-American spring season for the Tiger sophomore.
Wright has certainly developed a taste for match play while leading the Tigers into the final eight at the NCAA Championships in each of the last two seasons with a perfect 5-0 mark against the nation’s best.

With his match against Crocker remaining all square through 13 holes, it was clear that Wright would have a say in which team would take home the national championship when he stepped up for his tee shot at No. 14 with just five holes to play. Wright then stormed to victory down the stretch when he made back-to-back pars at No. 14 and No. 15 and a birdie at the par-four 16th hole for his comfortable 3&2 win in the end.

It proved to be an outstanding championship for Wright as he not only tied for 11th place to match Pierce as the top Tiger in 72 holes of stroke play, but he also captured LSU’s highest winning margins in the quarterfinal and semifinal rounds of match play on Tuesday with a 4&2 win over Vanderbilt’s Carson Jacobs and a 7&6 victory over Georgia’s Mookie DeMoss en route to the championship match.

“Absolutely. I mean, I can be more aggressive so it definitely is not like a fear of losing,” Wright said of his ability to play his best golf in match play. “Because you only lose one hole, you don’t lose multiple strokes to the field. We came here on a mission to try and win this.”

A fourth LSU Tiger in the lineup also remained unbeaten in match play as Ricard showed the nerves of a seasoned veteran while playing in his first career NCAA Championship. After finishing all square with Vanderbilt’s Zack Jaworski in the quarterfinal and scoring a decisive 4&3 victory over Georgia’s Greyson Sigg in Tuesday’s semifinal round, Ricard finished Wednesday’s match against Texeira, 1-up, as they were called off the course after 16 holes once Taylor had sealed the match and the championship for the Tigers.

Ricard also left Concession Golf Club with an unbeaten 2-0-1 mark in his NCAA Championship debut as he will team with Pierce and Wright in providing the Tigers with a strong foundation in the lineup as they look to be NCAA Champions once again in 2016 as they are sure to return one of the strongest teams in all of college golf next season.

Jolly might have dropped his match to USC’s Sugimoto on Wednesday, but the two-time All-SEC pick and All-American will have nothing but great memories when looking back on his final NCAA Championship.

“It means a lot,” Jolly shared of going out a national champion in his final tournament as a Tiger. “I’m out there playing with my brothers, and just couldn’t be more proud of them. This is what we worked for all year this year. We’ve worked so hard for this. The semifinals last year definitely stung a bit, and we came out here with a chip on our shoulder and got it done this year.”

The Tigers not only made history by winning their fifth national championship on the links in school history, but they also tied a team record with five wins in a season as they matched their single-season mark with five wins that was previously set during the 1959-60 season. The 2015 SEC Champions and NCAA Champions also took home the title from the Golfweek Conference Challenge (Sept. 14-16), David Toms Intercollegiate (Oct. 4-5) and Talis Park Challenge (March 15-16) during the 2014-15 campaign.

By taking home the team title in Wednesday’s championship match, the Tigers also won LSU’s 47th national championship in school history as one of the most decorated athletic programs in all of college athletics.

Teams Missing Top-15 Cut After Third Round of Stroke Play