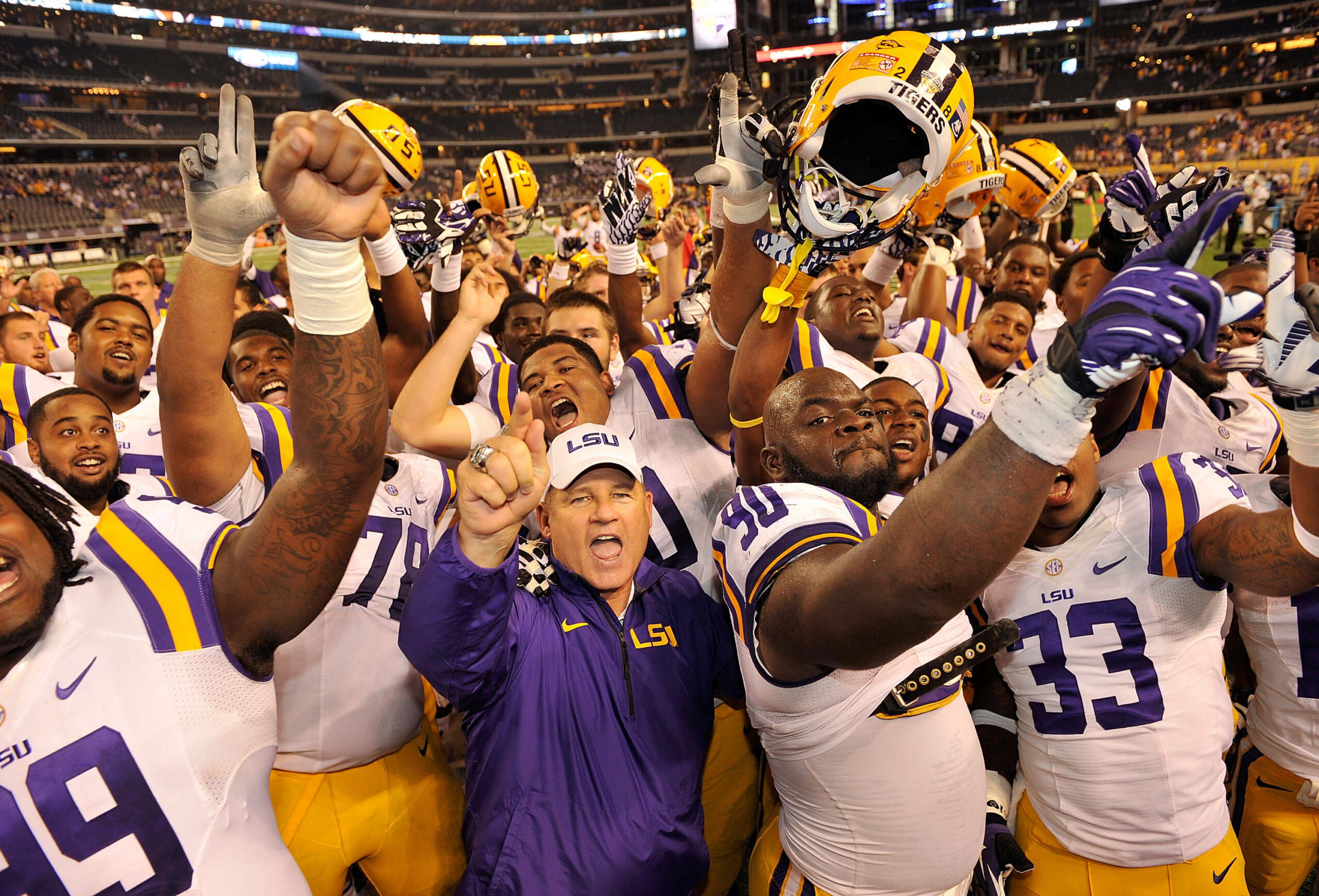 ARLINGTON, Texas — The 12th-ranked LSU football team (1-0) rolled for 448 yards of total offense and overcame a few of its own mistakes to beat No. 20 TCU, 37-27, and remain perfect in three trips to Arlington.

LSU quarterback Zach Mettenberger finished 16-of-32 passing for 251 yards with a game-icing touchdown pass to Jarvis Landry with 6:09 remaining in the season-opening Cowboys Classic. Landry and Odell Beckham Jr. both had more than 100 yards receiving, a feat LSU hadn’t seen since the 2001 season.

The Tigers were also productive on the ground, as junior running back Terrence Magee led the Tigers with a career performance highlighted by a 52-yard touchdown run that put LSU ahead 23-10 early in the third quarter. He added a 3-yard touchdown later in the quarter and finished with 95 yards rushing on 13 carries. Senior Alfred Blue carried 19 times for 89 net yards. Jeremy Hill made the trip but was held out of the game.

The Tigers won their 42nd-straight non-conference game in the regular season, 32 of which have come under head coach Les Miles.

Though TCU gave the Tigers a battle, three key plays led to 21 of the Horned Frogs’ 27 points. With LSU leading 13-3, TCU used a 100-yard kickoff return to get within three in the second quarter. In the third quarter, a roughing the passer penalty allowed TCU to stay on the field and complete a 10-play, 77-yard drive that ended with a 26-yard touchdown run. Then, leading 30-17 early in the third quarter, Blue fumbled at the LSU 6 and TCU scored two plays later to get within a touchdown.

LSU weathered its mistakes with big plays through the air and won its 11th-straight season-opener.

TCU (0-1) started quarterback Casey Pachall but switched to Trevone Boykin after Pachall’s interception on the first play from scrimmage in the second half. Boykin finished 6-of-12 passing for 70 yards and ran 10 times for 13 net yards. Pachall was 9-of-16 for 75 yards.

On the ground, B.J. Catalon led the way with 52 yards on eight carries, while James Waymon had 33 yards on six carries. Each scored a touchdown on the ground.

An LSU defense which many thought was gutted by the 2012 NFL Draft held its own throughout, as cornerback Jalen Mills, safety Craig Loston and defensive end Jermauria Rasco led the way with five tackles each. Mills had an interception, while Rasco and defensive end Danielle Hunter combined for a sack.

TCU won the coin toss and deferred its decision to the second half. LSU took the opening kickoff and began an efficient march into Horned Frog territory. An 8-yard reception by redshirt freshman receiver Travin Dural gave the Tigers a first down to their 37, and a 10-yard catch by Landry on third-and-8 moved the chains to the LSU 49. Landry’s 16-yard catch on the next play moved the Tigers in TCU territory at the 35. Landry and fullback Connor Neighbors sprung Beckham Jr. loose for a 17-yard end around to the 12, but LSU was unable to punch the ball in from the 6 and settled for a Delahoussaye field goal from 23 yards.

On the ensuing kickoff, LSU’s James Wright swiped the ball loose from return man Brandon Carter and recovered at the TCU 10. But, again, LSU’s redzone offense was left with a 28-yard field goal when two Mettenberger passes into the endzone were batted away by Horned Frogs.

A minute after its first score, LSU’s advantage crept to 6-0.

Finally getting its offense on the field with 8:29 left in the quarter, TCU plodded into LSU territory with its first run after five-straight pass attempts to start the drive. Pachall scrambled for 13 yards on third-and-4 and later connected with Carter for 25 yards on third-and-14. However, TCU also failed to get the ball into the endzone and came away with a 21-yard field goal that cut the Tigers advantage to 6-3 with 2:14 left in the quarter.

For the third time in as many drives, LSU offense put points on the board. This time, Mettenberger and Beckham Jr. connected for 26 and 44-yard receptions to the TCU 7. Though a false start stalled the Tigers temporarily, Blue got 10 yards back with a run to the 1 and fullback J.C. Copeland scored LSU’s first touchdown of the season on the third play of the second quarter.

Just as LSU looked to seize momentum in the game, B.J. Catalon broke through the LSU kickoff coverage for a 100-yard return. The second touchdown in 524 kickoff returns under Miles narrowed the Tigers advantage to 13-10 with 13:26 remaining in the first half.

Four-straight drives ended in punts before the Tigers took the field for the final 3:06 of the half. Passes for 15 and 14 yards to Landry gave LSU a pair of first downs to the TCU 39. After Mettenberger scrambled for 5 yards and a first down to the 28, Blue ran for 17 yards to the 11 with 1:27 remaining. A pass interference penalty against TCU put the ball on the 2, however, LSU would get no closer. A loss of 1 by Blue, a delay of game and a false start penalty had the Tigers at the 12 yard line with 15 seconds remaining in the half. After an incomplete pass stopped the clock with 5 seconds remaining, officials mistakenly called for a 10 second run off that would have ended the half because LSU lineman La’el Collins‘ helmet came off. However, because the incomplete pass stopped the clock, time was correctly put back on the clock. After an unsportsmanlike conduct penalty on TCU, Delahoussaye entered for a 23-yard field goal that put LSU ahead 16-10 at the half.

On the first play of the second half, Pachall was intercepted on a deep pass attempt by LSU cornerback Jalen Collins. LSU immediately took advantage of the mistake as Magee used blocks by Neighbors and Kadron Boone to take a run around the left end and down the sideline for a 52-yard touchdown.

The career-long run by Magee gave LSU a 23-10 advantage with 13:10 remaining in the third quarter.

With run-oriented Boykin taking over for Pachall, the Horned Frogs took advantage of a roughing the passer penalty on LSU defensive tackle Ego Ferguson to stay on the field after an incomplete pass on third-down. Six plays later, Catalon took an end-around handoff from Boykin for a 26-yard touchdown. With 8:58 remaining in the quarter, LSU led 23-17.

Mettenberger then keyed another touchdown drive by the Tigers, as he hit Beckham Jr. for 14 yards to the LSU 46. Competions of 13 yards to Boone and 10 to Landry were followed by a 13-yard run by Blue to the TCU 15. Six plays later, Magee dived in from 3 yards for his second touchdown of the game. With 2:49 remaining in the quarter, LSU led 30-17.

TCU worked its way to midfield and then punted to the LSU 1 to start the fourth quarter. Two plays later, Blue fumbled for the first time in 332 carries by an LSU running back. TCU took advantage of the opportunity with a 5-yard touchdown run by Waymon that moved the Horned Frogs within six, 30-24, with 13:04 left.

A quick three-and-out by LSU was followed by a 28-yard punt by Jamie Keehn that gave TCU field position at the LSU 48. Faced with a fourth-and-6 at the LSU 22, TCU elected to kick a 39-yard field goal with 7:35 remaining.

The conservative play backfired when Beckham Jr. returned the ensuing kickoff 75 yards to the TCU 25. On third-and-5 from the 20, Mettenberger connected with Landry for a perfect pass behind his receiver and away from the defender, and Landry did the rest for a touchdown. LSU moved ahead 37-27 and was not threatened again.

Attendance was 80,230, the sixth-largest in stadium history.