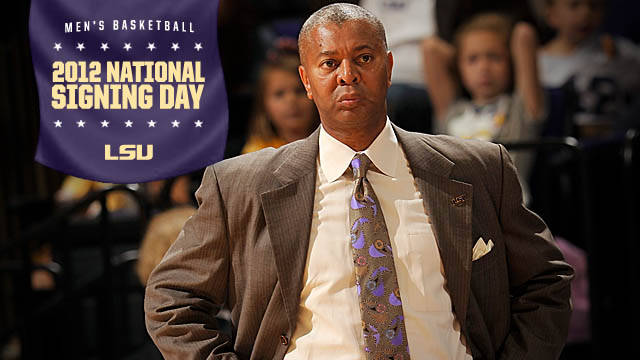 Signing a Southeastern Conference Aid Agreement was center John Odo of Nigeria, who is presently at Hill Junior College. Odo is scheduled to enroll at LSU in January and because of that does not sign a national letter.

The signing class is receiving national raves from the recruiting experts with 247sports pushing LSU to fifth on its national recruiting rankings, with Rivals.com having the Tigers coming in at No. 6 and ESPN.com putting LSU at No. 7.

“This class consists of four young men of exceptional talent that will allow us to continue to compete in the highest level in the near future,” said Coach Jones. “The versatility of this class is what we were looking for from the beginning. We are excited about the future of LSU Basketball.”

Martin who brings a Baton Rouge presence to the LSU team, is a consensus five-star selection and was ranked as the No. 12 overall prospect and the fifth-best power forward in the class of 2013. ESPN ranked him as the 15th top player in the nation and the seven and the seventh-ranked power forward, while Rivals.com has him ranked third in the country at his position. The 6-8, 218-pound Martin averaged 19.4 points, 12.9 rebounds and 3.0 blocks while leading Madison Prep to a 34-8 record a year ago.

“Jarell Martin is an exceptional talent who has the ability to play both outside and inside,” said Jones. “With his ball handling, passing and ability to score, he will be able to create opportunities for other players on his team. He could be a difficult matchup for our opponent.”

Mickey, a 6-7, 190-pound forward, is a consensus four-star selection and is ranked the No. 9 power forward and the 20th ranked player in the Class of 2013 by Rivals.com. ESPN.com has him listed at No. 13 power forward and the 47th-ranked player, while Scout.com lists him as the No. 11 at his position. He attends Prime Prep presently after leading Grace Prep of Arlington, Texas, to the state championship a year ago. He is also the brother of LSU wide receiver James Wright. He chose to join Coach Jones at LSU over such schools as Ohio State, Oklahoma State and SMU.

“Jordan Mickey has an exceptional knack for scoring inside and out,” the first-year LSU coach noted. “He is a tremendous passer and his ability to rebound and defend both the post and perimeter positions will allow us to utilize him in multiple positions.”

Another four-star selection, Quarterman is a multi-purpose athlete who can play anywhere on the perimeter. He is listed as the No. 18 small forward by Scout.com, while Rivals.com put him as the No. 12 point guard. ESPN.com lists him as the 17th-ranked point guard and the 67th best player in the Class of 2013.

“Tim Quarterman is a great playmaker and his height will allow him to play the 1, 2 and 3 offensively. He also will have a great defensive presence for us,” said Jones. “His basketball IQ will allow him to step in and compete at this level right away.”

Odo, a 6-10, 230-pounder, will graduate from Hill College (Texas) in December, where he earned honorable mention junior college All-American honors after averaging 12.4 points and 14.2 rebounds a contest. He will have two years of eligibility remaining for LSU beginning with the 2013-14 season.

“John Odo will be a great addition to our team with his ability to defend in the post and rebound,” Jones commented. “He will also be a great back to the basket low post scorer that will give us a much needed true center.”

Of the class, analyst Evan Daniels of FOXSportsNEXT said, “…What Johnny Jones has accomplished so far is impressive…”, while Jerry Meyer of 247sports.com said: “… It’s been a little while since LSU has had recruiting success like this. They’re bringing in really big strong, athletic guys who are really good basketball players.”

Eric Bossi of Rivals.com wrote: “Don’t look now, but LSU has emerged as a major threat to be reckoned with on the recruiting trail. Well, that’s always been the case on the football field but under the direction of new coach Johnny Jones they are now a major threat on the basketball trail as well. All Jones has done for his first signing day effort is lock up the nation’s sixth ranked class.”

The LSU Tigers 2012-13 team plays again on Tuesday night against Northwestern State at 7 p.m. in the Maravich Center. Tickets are available at LSU.tix.net. Fans bringing a canned food item to donate at the game on Tuesday can receive a ticket for just $5.