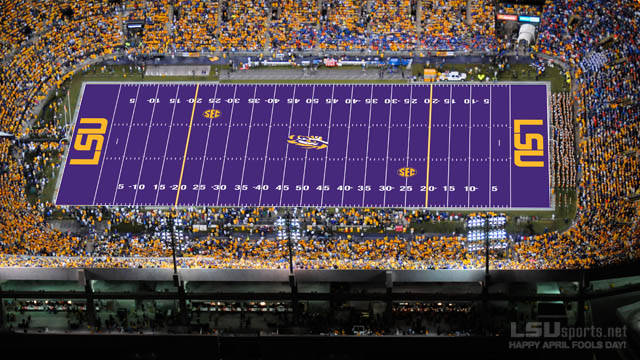 “It’s now time to expand the traditions that surround our football program,” LSU head coach Les Miles said. “LSU is going to take the lead in what we think will become the wave of the future and that’s field turf in the colors of your school. The installation of the purple field turf will add to the excitement of a Saturday Night in Tiger Stadium and this team will enjoy the opportunity to play on what will be the finest surface in football.”

LSU becomes the latest school looking to brand its field with the school colors. Boise State and the University of New Haven play on blue field turf and Eastern Washington recently announced plans for a red field this upcoming season.  In keeping with tradition, the field will feature yard markings every five yards and the eye of the Tiger at the 50-yard line, with the SEC logo on the 25-yard line.

“This wasn’t just a knee-jerk reaction,” Marcus Davidson, Assistant to the Associate in the Office of Athletic Branding, said. “It was a perfect storm of factors.  Not only will field maintenance be easier for our grounds crew, but being able to project purple and gold to a national television audience is an opportunity for branding that will make Tiger Stadium the greatest place to watch a sporting event in the world.  With the purple turf, the only place that compares is the Roman Coliseum, and to my knowledge, that doesn’t even exist anymore.”

The turf will be installed by Turfus and Sons, a subsidiary of Vandalay Industries, which is the largest producer of the rubber material found underneath dangerous playground equipment.

“Partnering with LSU just makes sense,” said Art Vandalay, the President and CEO of Vandalay Industries said. “We’ve been speaking on the virtues of colored turf for years at various conventions and we finally have the perfect partner in LSU.  The field is going to be amazing.  Although we have never done a project with our turf on anything more than municipal parks, we are confident that ‘Tiger Turf’ is going to be a staple of all collegiate athletic fields.  The possibilities are endless.  I see a future where grass will cease to exist.”

The football team has been experimenting with the “Tiger Turf” during select drills in spring practice.  With a patent-pending revolutionary design, the purple turf certainly left an impression on players and coaches alike.

“It is definitely faster than anything I’ve ever seen in my 14 years of conditioning,” Tiny Gampshone, the junior executive strength and conditioning coach said. “It is really going to prompt muscle confusion in the other team as the brain wants to run on a green surface.”